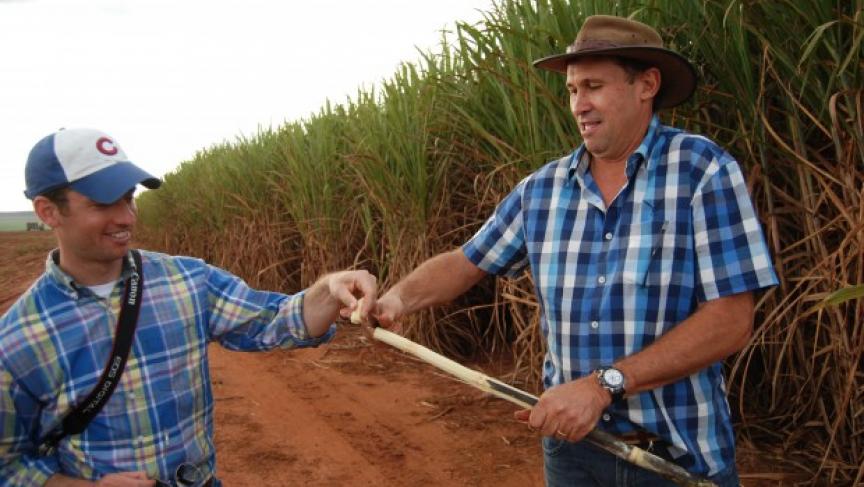 Just a few years ago, ethanol was the hot topic among car buffs and environmentalists. The day seemed not far off when we’d all be driving our cars powered by corn, not petroleum.

That idea has largely fizzled in the US. But in Brazil, people have been driving their cars for years powered only by sugarcane ethanol. Ethanol is an alcohol that can come from many plant sources, and Brazil proved: You don’t need gas to go.

In recent years though, the success of sugarcane ethanol in Brazil has hit a speed bump. It’s a trend that Brazil’s sugarcane farmers, as well as environmentalists, would like to stop.

If you drive a car in Brazil, it’s likely you drive what’s called a “Flex” car. These autos have flexible engines, as the name implies, that can run on either ethanol or gasoline. A liter of gas carries you a bit farther, but it costs more.

So most every Brazilian driver knows the magic number. If ethanol is selling at 70 percent or less than gas, you fill up your tank with sugarcane.

A few years ago, a liter of ethanol cost about half as much as gas, said Adhemar Altieri with the sugarcane trade group UNICA.

“Which was great, I mean Brazilians were going berserk on driving, because it was just wonderful.”

Berserk on driving with sugarcane, that is. Over time though, inflation, and other economic and harvest production factors in the sugar industry, drove the price of ethanol a little bit up. At the same time, the government was artificially suppressing the price of gas to help control Brazil’s overall inflation.

“And the consumer doesn’t really notice that gas is frozen, they notice ethanol is going up,” said Altieri.

“So the complaint is: ‘Wow ethanol is just too expensive.’ Well is it? You know, you gotta work out the relative price. And if gasoline cost what it should, you would never say that. You would say, ‘Ethanol is a helluva deal.’”

Instead, sales are way down. And Brazil’s sugarcane farmers are feeling the pinch.

Tough Times, and Huge Potential, in the Fields

I visited some sugarcane farmers near the town of Lencois in the state of São Paulo, and asked an interpreter, Cassia Brosque, to ask some local farmers how business is going.

“Agricultura,” he said making an undulating motion with his hand. Ups and downs.

Lorenzetti and the other farmers here said they’ve been losing money for several years. Of course, they made a lot of money during the ethanol boom of the past decade.

They’d like to get back there again and are hoping to spur demand by getting out a simple message: “Ethanol is part of the solution to climate change, gasoline and petroleum products are not.”

Those words were spoken, not by a Brazilian sugarcane farmer, but by American Kevin Ogorzalek, who manages agriculture field programs for the international conservation group WWF.

WWF group is working with cane farmers in Brazil to help them grow their crop in a more sustainable way. That means using less fuel and chemical inputs, while also getting better yields. Cane is really a super grass that can grow some 18 feet high

WWF is also helping farmers do things like protect local waterways. And they’re advising farmers how to switch from burning leftover sugarcane stalk in the fields, to burning it at the mill to generate electricity. They’re also instructing them to leave behind an appropriate amount of the stalk to create a “trash blanket” to fertilize the field and prevent dirt from blowing away.

So while the bloom may have come off the rose for corn ethanol in the United States, Ogorzalek says sugar here in Brazil is a different story.

“Corn ethanol, you get much less ethanol per hectare,” said Ogorzalek.

Depending on conditions, Brazilian sugarcane farmers can squeeze nearly twice as much ethanol out of a hectare of sugar than an American farmer can get from a hectare of corn, and use less energy to do it.

Ogorzalek holds a sugarcane stalk and says this grass has the potential to be a wonder crop.

“It can be used for so many different things, whether it’s calories or for fuel, and that’s fuel in terms of liquid fuel from ethanol, or bioelectricity at the sugarcane mill,” said Ogorzalek.

“And now these new technologies are enabling it to be used for plastics, or jet fuel, and even anti-malarial drugs. That’s the beauty of this crop. And it can be relatively low impact if managed appropriately.”

But to manage things appropriately while growing more sugar…that takes money. And that comes back to the problem of consumer demand.

The Near-Term Prospects for Sugar at the Pump

He spends a little bit extra to fill his car with ethanol, but it’s his job is to think through all the environmental reasons to do that.

Ultimately, Mattar sees ethanol only as a transitional fuel, bridging the gap until there’s more electric cars and better mass transit. But until then, many Brazilian environmentalists see ethanol as their best option.

I asked Brazilian cab driver Diarlei Rodrigues Da Silva – who drives a 2010 Chevrolet that can run on ethanol, gasoline, or even natural gas – if he factors in environmental benefits when he chooses his fuel.

“No,” he said. Speaking through an interpreter, he said he knows that ethanol has some environmental benefits, but he never stopped to think about them.

He said he pays attention to which gas stations other taxi drivers go to as well. By his informal estimates, 95 percent of cab drivers in Rio don’t use ethanol. It’s simply more expensive at the pump.

And in the end, to most people in Brazil, and really everywhere in the world, that’s what matters most.

REPORTER’S UPDATE: In recent days, ethanol prices have been dropping in parts of Brazil to again become cost-competitive with gas. Sugar millers have been directing more sugar toward ethanol, and the Brazilian government has provided a modest tax cut to make ethanol more cost competitive again. Stay tuned…