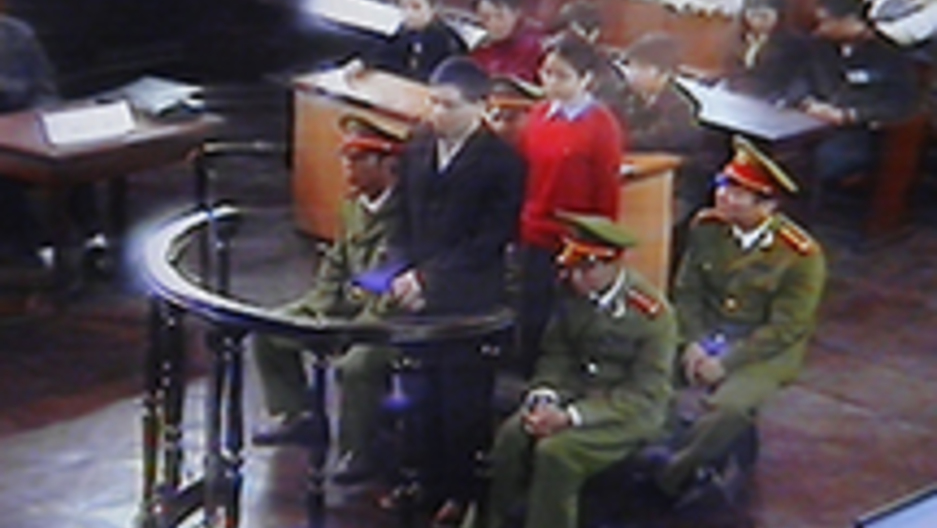 Thursday, President Barack Obama meets with Vietnamese president Truong Tan Sang in Washington. On the US agenda: human rights in Vietnam, especially the government's crackdown on dissident bloggers. Press watchdog groups estimate Vietnam has imprisoned 35 bloggers, one of the worst records in the world. And a new decree issued last week tightens restrictions on Internet use even more. But Vietnam's bloggers are learning how to keep one step ahead of the authorities, with the help of net-savvy activists in the US. Valerie Hamilton reports.

Trinh Nguyen is an organizer with Viet Tan, a Vietnamese pro-democracy group in the US. Sometimes, that means she's tech support.

From her dining room in Washington DC, she's Skyping with a blogger inside Vietnam who is having trouble getting around the government's firewall on Facebook. Facebook is popular not just for social networking, but also for dissidents speaking out. But when the country's 16 million Facebook users try to navigate to the site directly, they're greeted with a blank page.

The Vietnamese government keeps a close watch on potential sources of dissent, and increasingly, it is focused on the Internet. Officials have arrested more bloggers this year so far than in all of 2012. The bloggers are accused of crimes against the state, committed in cyberspace.

"They are using technology to track bloggers online, so they're routinely followed, they're harassed, they're brought into interrogation," says Trinh.

For bloggers, staying below the government radar is essential to staying online and out of jail.

Now, Internet-savvy activists, including sympathetic Vietnamese-Americans, are teaching them how. Call it: Digital Security 101.

"They're learning how to secure their emails, what's the best method of chatting," says Trinh. "So, if the activists in Vietnam are on Skype, activists in the US are teaching them how to delete their history, how to clean your browsing history, or how to switch up your Internet Protocol address using proxies.

Trinh is from Vietnam, but moved to Texas when she was six years old. She and other young Viet Tan activists in the US started their cyber-self-defense training in 2009, when the Vietnamese government first set up its Facebook firewall. The activists have produced a music video in English and Vietnamese to expain how to use a proxy server. They've also developed more training courses, held over Skype in other Southeast Asian countries.

On the site, bloggers can watch videos in English with Vietnamese subtitles. They show how, for example, to hide your computer's identity online.

It may sound cloak and dagger, but in Vietnam, online dissent is dangerous.

Delphine Hagland heads the US office of Reporters Without Borders, which keeps a global press freedom index.

Vietnam ranks close to the bottom.

"If you are a Vietnamese citizen and you open a blog where you will express your discontent regarding a corruption case or an environment case, you will be arrested and sentenced to many years in prison," Hagland says.

Nguyen Van Dai is a prominent human rights lawyer and blogger in Vietnam, who knows firsthand about the need for digital security.

"They send the security officer watch me, and follow me everywhere I go," Dai says.

In 2007, he says police searched his computer and found links to his pro-democracy writing online. He spent four years in prison, on charges of propaganda against the state. And today, while under house arrest, he writes a popular blog about democracy and human rights.

Unlike many bloggers, Dai writes under his real name.

He took a Viet Tan cyber-defense course over Skype earlier this month.

"We learn how to use Facebook by two steps; one is password, the second is code number," he says.

Trinh Nguyen says Viet Tan has trained hundreds of bloggers in circumvention and digital security, and she hopes they'll help the information go viral inside Vietnam.

But having the digital tools to operate securely online is still no guarantee of safety in the real Vietnam. Fourteen activists and bloggers imprisoned in January were arrested after attending a Viet Tan training session.