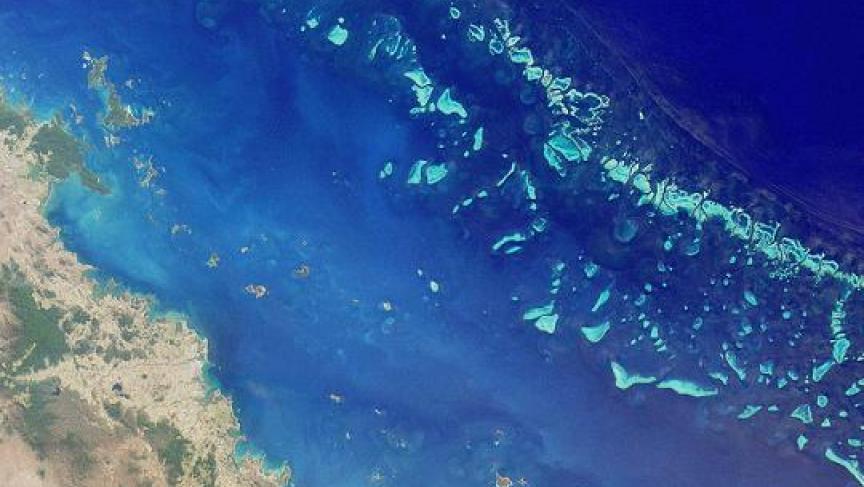 A military mistake off the coast of Australia figures in our Geo Quiz.

Some 28,000 US and Australian troops are taking part in a joint military training exercise.

As part of the war games, two American fighter jets were trying to hit an island target off the coast of Queensland, Australia's big northeast state.

The US Navy says the practice run had to be aborted after several flybys.

So the planes headed home.

But that wasn't the end of it.

The jets were dangerously close to running out of fuel and had to drop the bombs to make it back to the aircraft carrier.

It turns out they dropped four bombs near a World Heritage site.

That would be the Great Barrier Reef, the world's largest coral reef, stretching out over 1500 miles.

Can you name the sea where this military mishap went down?

The Great Barrier Reef off the east coast of Australia is the world's largest coral reef.

It's in the Coral Sea, a marginal sea that lies between Queensland and the South Pacific.

The US-Australian joint military exercise called Talisman Saber involves war games that are supposed to be out of view and off the public radar.

Instead they're making headlines.

"Two AV-8B Harriers were on a training mission and the approved area where they could do some of this live training with these 500 pound bombs was not safe to drop the bombs," he said.

Apparently there were a few civilian boats sighted too close to the target range.

So Commander Marks says the fighter jets were ordered back to the aircraft carrier. But they were extremely low on fuel and needed to lighten their payload.

So what do you do when you're flying over the Coral Sea and need to jettison four 500-pound bombs?

The pilots dropped them in shallow water near a coral reef, the Great Barrier Reef.

None of the bombs exploded.

They were described as "inert or missing critical fuses." Dummy bombs.

Commander Marks says the Australians were in on the decision to drop the payload.

Still, the reefs are fragile ecosystems. They already face pressures from climate change and ocean acidification.

Marks says that was taken into consideration.

"What I would like to say is that the environment is our top concern," he says. "We take precautionary measures. It is a safe situation for the environment, shipping for navigation."

A marine scientist at the Great Barrier Reef Marine Park says the unarmed bombs pose only a low risk to the health of the reef. The US Navy says it will work with Australian authorities to recover the bombs from the Coral Sea.

But one Australian senator called the drop a botched exercise and said it was "no way to treat a World Heritage area."