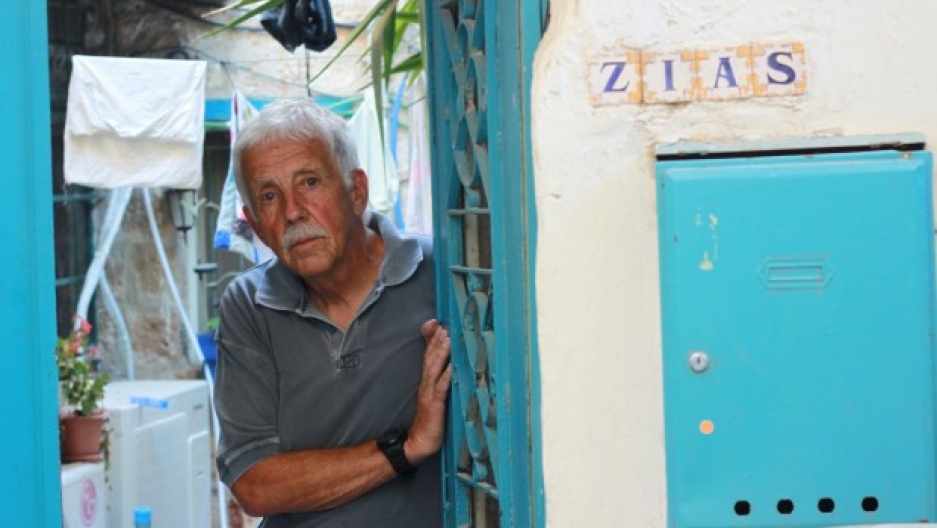 Defendant Joe Zias at his home in Jerusalem

Share
There's a dark underbelly to the world of biblical archaeology in Israel. The latest saga involves an Israeli-Canadian filmmaker, host of a TV series called "The Naked Archaeologist," who believes he may have found the tomb of Jesus, the nails of the cross, and a smattering of other finds. A retired curator in Israel's government antiquities authority says the filmmaker's claims and methods are one big money-making scam. The filmmaker says that's libel, and he's suing him for $1 million. The filmmaker did not want me at his trial. After I met him outside the courtroom last week and told him I would be covering the case, his lawyer filed a motion to hold the hearing behind closed doors. The judge overruled the motion. So I got to stay. For seven hours, I watched a courtroom drama unfold that captured the essence of the intriguing, and cutthroat, business of biblical archaeology. Simcha Jacobovici is the filmmaker who says he's been wronged. He stars in a TV series called "The Naked Archaeologist." No, he's not actually naked. "It's called 'The Naked Archaeologist' because we serve the archaeology naked," said Jacobovici in a video clip about his show. He said he is looking to see if there is historical proof for the stories of the Bible. "My job is to be like the little kid in the story of 'the emperor has no clothes,' and say, 'Wait a minute, where are the clothes?'" Jacobovici said. "That means sometimes people get upset with me and sometimes people get excited. But at least we're opening the windows and letting the fresh air in and we're talking about the stories again." What some people are talking about right now is whether or not Jacobovici is a fraud. "Had he said this is science fiction, I could care less. Historical fiction, I could care less," said Joe Zias, a Michigan-born anthropologist now retired from Israel's antiquities authority. "The moment you said that it's DNA, the moment you say its science, the moment you step into my world, then I think you're into trouble." Zias doesn't just accuse Jacobovici of bad science. He has accused him of "pimping off the Bible," trying to "deceive the public," "calculated deception," and propagating "multi-million dollar schemes." Zias is particularly critical of Jacobovici's documentary called "The Lost Tomb of Jesus." In it, Jacobovici investigates the site where he believes Jesus and his family was buried. There was much buzz surrounding the film. Its executive producer was none other than James Cameron, of "Titanic" and "Avatar" fame. The film was slated to air on the National Geographic channel. But experts invited to examine the film's claims were not convinced, and the channel dropped it. Jacobovici wouldn't speak about his archaeological theories for this story. But outside the courtroom, Jacobovici was willing to speak about the case. He said professional disagreements are one thing, but all of this has gone too far. "I just think it's a very simple thing. Democracy ends where libel begins," he said. "When you accuse people of criminal activity, you know, of planting evidence and things like that, you have crossed the line from legitimate debate into just plain old classic libel." Jacobovici says Simon and Schuster, the publishers of his book about Jesus' tomb, delayed the publication of his next book because Zias wrote them a critical letter. He also claims Zias' correspondence with the National Geographic channel and the Discovery Channel led to the cancelation of film screenings on both those networks. Zias denies all that. Altogether, Jacobovici claims Zias has cost him about $2.3 million dollars in damages. He said this trial is about more than just money: it's about enabling people like him to voice controversial theories about biblical archaeology without fear of defamation. "Professors come up to me, and they say, they whisper to me as if we are living in the Soviet Union, 'I agree with you on that, or I agree with you on this, but I am not going to say it because I don't have tenure yet,'" said Jacobovici. "What kind of society are we living in where people are afraid to express their views because they're going to be libeled? Especially when you have theology involved, people are scared to express their opinions." Zias says that's exactly what Jacobovici is doing in this lawsuit — making his critics scared of expressing their opinions. "You'd be surprised the number of people, colleagues, who support me, support me to the bitter end, but who are afraid to speak up," said Zias. The lawsuit is expected to last about another year. No matter who wins this one battle, Zias said his opponent and his team have already won the war. "In a way, they would have won already simply by filing the lawsuit against me," Zias said. "The message is: you want to criticize us? You're going to end up like Joe Zias." The dean of a university in California told me lawyers for Jacobovici threatened a lawsuit after he published an article critical of Jacobovici's theories on the Jesus family tomb. There was never any further legal action, however. The dean spoke on condition of anonymity because, he said, he didn't want to get dragged further into all of this. And who can blame him? When my interview with Jacobovici took a turn he didn't like, he insinuated he'd sue me too.