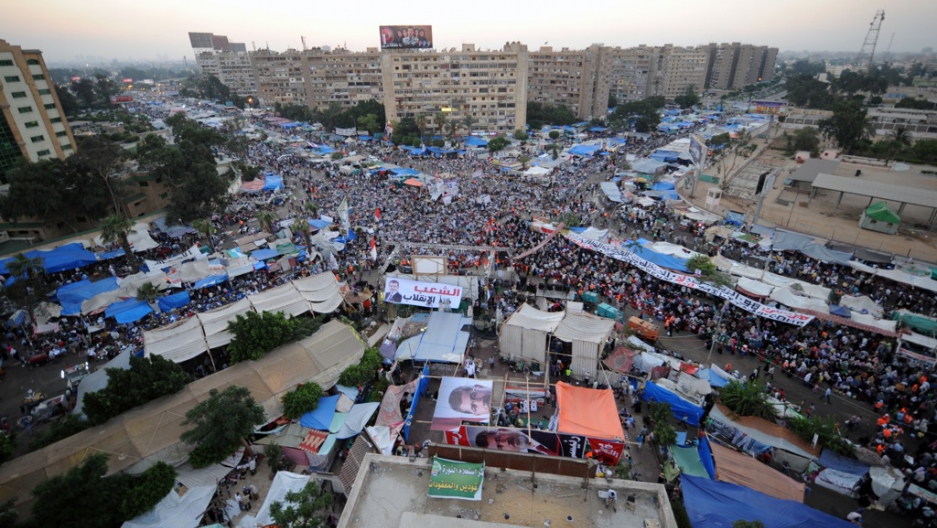 CAIRO, Egypt – Under a waxing crescent moon, we pushed through the crowd of Muslim Brotherhood supporters at the Raba’a al-Adawiya Mosque, still camped out by the tens of thousands in a courtyard and in the nearby warrens of alleys and side streets.

The mosque has been transformed into the epicenter of a protest movement against the military’s decision to oust and detain Mohamed Morsi, the first-ever democratically elected president in the nation’s 5,000-year history and a political leader who emerged from the once-outlawed Muslim Brotherhood.

The military says it was responding to the will of the Egyptian people to impeach a failed president after millions of people took to the streets on June 30. The Muslim Brotherhood calls the action a military coup. Washington has avoided the word ‘coup,’ recognizing that if it were to call it one it would as a matter of policy have to cancel $1.5 billion in annual aid to Egypt.

I sat down with Dr. Essam El-Erian in a basement of a clinic that is attached to the mosque. With thundering prayers and chanting of the crowd thundering in the background, I asked him if he was nervous about being under house arrest.

“We have lived this all before. We know the prisons. Sadly, this is not new for us to be under the threat of arrest,” he said.

The longtime spokesman of the Muslim Brotherhood who is now Vice President of the Freedom and Justice Party, the political arm of the Brotherhood, said in no uncertain terms that the actions were a military coup.

“A green light came from Washington to those militants, to the leaders of the army, to the Gulf men to support this anti-revolution. And I hope that Americans can understand they lost time and lost power in this region when they are — again, it's the will and choice of the people in a democratic process,” he said.

The area around the mosque, plastered with Morsi posters and Muslim Brotherhood banners, has become a bunker, a place where the Brotherhood’s leadership is essentially holed up facing the threat of arrest.

Morsi and 10 other Muslim Brotherhood leaders have already been detained and are being held at an unknown location.

A clinic set up within a religious charity hospital adjacent to the mosque teemed with wounded protesters who’ve been shot and beaten with batons during confrontations with the military and police. There are gruesome posters of corpses killed by the military on July 8 when eyewitness accounts show the military began gunning down protesters while they were praying in front of the Republican Guard Club.

The Raba’a camp has come to symbolize a culture of victimization where the Brotherhood seems to be retreating into its historical narrative as an underground movement caught in what one calls ‘minha,’ or the ‘ordeal.’

I have covered the Muslim Brotherhood at various times during nearly 20 of their 80 years of existence, and seen this narrative play out when they were an outlawed party that endured waves of brutal crackdown and occasionally a lighter hand under Hosni Mubarak that permitted them to enter elections as long as they didn’t overstep their bounds.

And I was in Tahrir Square for the massive street protests of January and February 2011 and watched as the Brothers organized and ultimately controlled the square. And now they are here at Raba’a. I asked the new spokesman about that.

Gehad El-Haddad, spokesman for the Muslim Brotherhood, said, “Tahrir was taken, so we needed a new place … So this is Tahrir 2.0. It is designed to sustain attacks, rather than show numbers. Tahrir was very vulnerable to being shut down by the military.”

“This one can’t be shut down. We can dig in here for a long time, a very long time,” he said.