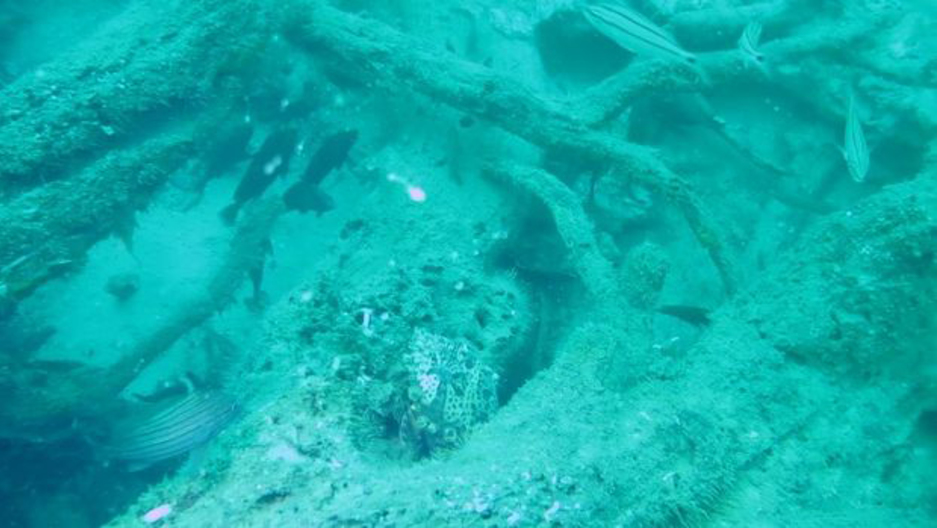 This cypress wood on the floor of the Gulf of Mexico is more than 50,000 years old. (Photo courtesy of Ben Raines/The Press-Register.)

Deep beneath the surface of the Gulf of Mexico, off the Alabama coast, lie ancient cypress trees that only a handful of people have ever seen.

One of those lucky few is Ben Raines, director of the Weeks Bay Foundation. For many years, Raines was the environment reporter for a newspaper in the area, the Press-Register of Mobile, Ala.

"I had a buddy who owned a scuba diving shop, and he used to taunt me with this tale of an underwater forest that he had been diving on one time, and I pestered him for years and years and years, and he finally agreed to take me out there," Raines said.

Raines' friend had heard of this spot from a fisherman, who'd spotted a ledge on his bottom-finder and used the ledge he saw to catch a number of red snapper. Confused, he told Raines' friend about the spot and asked him to go dive out there and see what it was.

Some 60 feet beneath the surface was what remained of a forest of cypress trees.

"All over the Earth, we know sea levels have gone down hundreds of feet," he said. "Now we’ve got these trees 60 feet underwater, so sea level was that low, and it’s just a fascinating push and pull of the ocean through the climatic change over the eons."

It's been about a year since Raines himself got his first look at this under-water forest.

"The first trip we tried to go out, the boat broke down. The second trip, the boat broke down," he recalled. "We finally made it out there and the way we dive here, we’ll drop the anchor over whatever the GPS number is. And then we swim down the anchor line to get to the spot because the water’s a little murky - otherwise you get lost."

When he finally got to the bottom he immediately found what he was looking for. A tree stump.

"It was about as big around as a garbage can lid, but it had that very distinctive irregular shape that a Cypress trunk has," he said. "It was surrounded by knees. You know, Cypress trees have knees ... that stick up out of the water to kind of help hold them in place, and here was a Cypress tree on the bottom of the ocean."

The entire forest covers nearly a square mile of sea floor, but Raines has surveyed a much smaller portion. A recent sonar study discovered some trees even larger than the ones Raines has previously explored.

Raines says it was a magical sight.

"It’s totally enchanting," he added. "These trees are covered in anemones and crabs and shrimp - and then you have these huge clouds of red snapper and grouper following you around."

On one trip, he said some 200 red snappers followed him around as he swam.

"Some of the fish that are down there, the Trigger fish, will actually come up and chew on your camera. You have to shoo them away. They just seem to have no fear," he said.

It's an experience unlike any he's ever had before, Raines said. Ever since his first trip, he's taken a video camera with him and left it on while he swam around.

Lately, he's been taking three cameras down so he can get more angles and preserve the unique site before it disappears.

"It may be a very ephemeral place. We may only get to see it for a little while," he explained.

It's clear, though, that these trees have been in place for a long time. Samples Raines brought up for scientists turned up as radiocarbon dead — or more than 50,000 years old. Raines' next goal is to bring up a core sample so the rings can be counted to get a better idea of growth and conditions when they were alive.

Though they've survived for years, they are decaying — and eventually they'll be gone. Cypress, though very rot-resistant, would likely already have decayed if it had been exposed to the ocean for this long. The theory, Raines says, is that the trees had been covered by sand and mud until Hurricane Katrina came through and uncovered them.

"On the top layer of them, of the stumps, that top layer you can break it apart with your fingers," he said. "It’s very soft, and there’s all kinds of boring organisms digging holes in them. But once you get inside about a half-inch or an inch, then the wood’s very hard, and it’s like cutting a tree down — a living tree."

And the condition of that wood has attracted lumber companies that want to harvest the trees from the sea floor. Raines is trying to keep that from happening — keeping the coordinates secret while he tries to get the trees preserved.

"I’d like to see this preserved and in this enchanted little environment where people can enjoy it," he said.