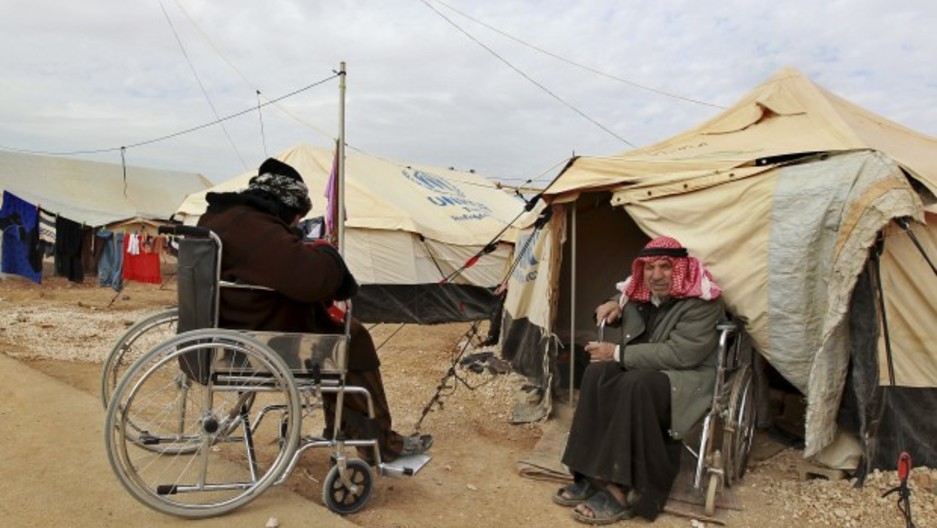 Syrian refugees in wheelchairs are seen in front their tent at Al-Zaatri refugee camp in the Jordanian city of Mafraq, near the border with Syria, January 25, 2013. The United Nations on Friday urged Syria's neighbours to keep open their borders to civilians fleeing the intensifying conflict and said that the refugee exodus into Jordan was "absolutely dramatic". More than 30,000 Syrians have arrived in Jordan's main Zaatri camp this year, including 4,400 on Thursday and another 2,000 overnight, it said. Most were fleeing fighting in the southern area of Deraa, food and fuel shortages and high prices. REUTERS/Muhammad Hamed (JORDAN - Tags: CIVIL UNREST POLITICS SOCIETY) - RTR3CXYX

Share
It's bad enough to be forced to run for your life. Many Syrians experience that on a daily basis, fleeing an attack from one side or the other in the civil war. Now imagine not being able to run when an attack comes. That's what happened to Thaer Bilal. When his village near Aleppo was bombarded, he watched through a window as neighbors ran down the street for safety. Wheelchair bound, he couldn't join them. "I crawled on the floor to the bathroom as since we were children they told us the bathroom is the safest place in the house," Bilal says. "So I stayed there for a while. I can't tell you how long it was but it felt very long, until the shelling quieted down." I feel that fear and death surround me. There is nowhere for me to go, and I am staying and I am scared. And since then I get this fear attack, panic attack that makes me shake like a leaf, and I just sit and wait for death to come by. I have since left my village, and now I'm homeless. I feel lost, and I don't know what to do. I can't describe you in words my state of fear, being afraid for my life, being afraid of the next attack, being afraid of the next Syrian Air Force assault, and there is nothing I can do." Bilal's interview first aired as part of the BBC World Service program "Outlook." Chavia Ali was also interviewed on the program. She contracted polio as a child in Aleppo and, like Bilal, she's now in a wheelchair. In 2004, Ali created an organization that fights for the rights of people with disabilities in Syria. She now lives in Sweden. But she says her friends still in Syria have suffered because of the war. "I know more than 25 of my friends with disability," she says. "They face what [Bilal] faced, and some lost their lives at the end of the attacks." Ali says that's what it's like for disabled people trying to cope with Syria's civil war.