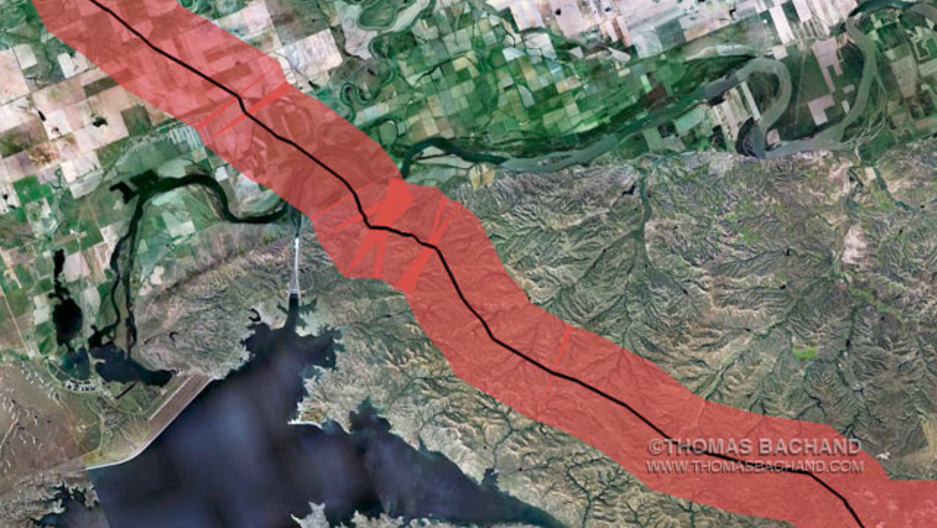 Thomas Bachand is creating Google Earth simulations of the evacuation zones around the Keystone XL route, but was stymied when he learned the exact route is not publicly known. (Photo courtesy of Thomas Bachand.)

That's according to Thomas Bachand, a California landscape photographer who wanted to take pictures of the land the pipeline would cross. He pored through the State Department's original Environmental Assessment to see where he should go, but he could never find the exact route.

The original assessment was done by an outside party and paid for by TransCanada, the company trying to build the pipeline.

"The only map was a rough map which is issued by TransCanada. And even if one needed to know the exact route, then such a map was not made public," he said.

Bachand had hoped to create a photo book that tells the story of land use in this country through the land that would be crossed by the pipeline.

"It was just this ideal metaphor for land use and for energy policy, and for climate change in America," he said. "It just splits the country right in half. Literally, it goes right down the middle of the country."

It's hard to imagine this was simply an oversight. Bachand said the assessment includes details engineering diagrams, but with all location information omitted. Unless you were actually at the site, you'd have no way of looking at what the diagrams were saying.

Ultimately, he says, he was able to get some location data from state agencies. But some states refused to make the information public. That's when he turned to the State Department directly, filing a Freedom of Information Act request to get the data. After weeks of back-and-forth and being told it would take eight to twelve months to get him information, earlier this month he got a letter telling him that his request was pointless.

"We were informed by employees familiar with the records and organization of those offices that the department does not have copies of records responsive to your request because the Environmental Impact Statement for Keystone Pipeline project was created by Cardno Entrix under a contract financed by TransCanada Keystone Pipeline LP, and not by the US government," said the letter Bachand received. "Neither Cardno Entrix nor TransCanada ever submitted GIS information to the Department of State, nor was either corporation required to do so."

In other words, the State Department says it never asked for, nor did it receive, information about the concrete location of the proposed Keystone XL pipeline.

Bachand says the lack of specific route information makes the environmental assessment virtually impossible to comprehend, even if someone commits the time to reading it thoroughly.

He also wondered whether the State Department can make an informed decision without such information.

"I do have this sense that the process has been captured by special interests, and that they get more of a say in what’s happening than the average citizen does," Bachand said.