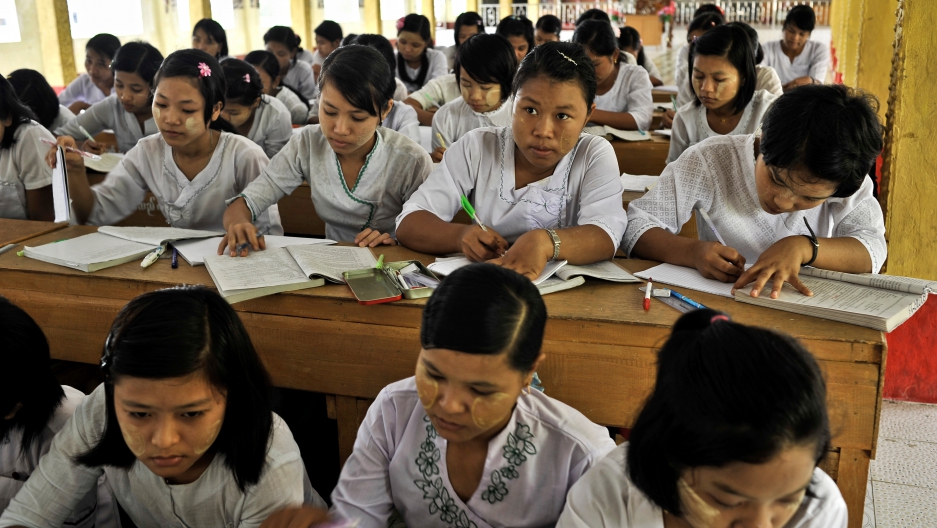 Girls in class, at a school in Pe Chaung village in Myanmar.
Credit: Kaung Htet
Share

BOGALAY, Myanmar — Five years ago, torrential rain and winds of up to 160 miles per hour pounded the Irrawaddy Delta, a low-lying region at the southern tip of Myanmar where the Irrawaddy River spills out into the Andaman Sea.

Cyclone Nargis lasted two days, but by the time it was over it had leveled villages, carrying away thousands of the thatched palm huts residents here in Bogalay have constructed along the river banks, exposing their occupants to the full might of the spiraling winds. By the time Nargis subsided, 140,000 people were dead, 800,000 were displaced, and 2.4 million required immediate humanitarian assistance, according to the UN.

Fresh out of medical school at 26, Dr. Ye Phyo Kyaw had been working at nearby Pyapong Hospital for just a few weeks when Nargis made landfall.

He was one of just three doctors there working around the clock to provide care in the midst of what was quickly becoming a humanitarian crisis. After decades of government neglect of many facets of the country’s development, Nargis made flaws in Myanmar’s health care system glaringly apparent. Since 60 years of military rule gave way to a nascent democracy in 2011, the current President Thein Sein’s government has been struggling to reverse that legacy of neglect.

“Those were the worst days,” Ye Phyo Kyaw recalls. “And it just got worse, day by day.”

The storm surge contaminated key sources of drinking water in the area; sanitation was poor as villagers who lost their homes gathered in crowded makeshift camps. The chaos was made worse by a military regime with an isolationist streak that refused to open its borders to international aid. Humanitarian workers and boxes of medications stood in limbo at airports in Thailand for nine days while the situation on the ground rapidly deteriorated.

Every day, Ye Phyo Kyaw struggled to treat hundreds of patients suffering from acute diarrhea — which spread rapidly from one unwashed hand to the next and which quickly became lethal, particularly for infants, in a community where patients could not hydrate.

A military truck arrived with supplies, the doctor remembered.

“The military officer walked around the hospital next to the beds of the patients and said, 'You have free medicine, enough medicine for 10 years,'" he added.

But there was a problem. The truck contained some medications, but it didn’t have the antibiotics needed to treat diarrhea. Ye Phyo Kyaw raised the problem with his superiors, who told him to make do with the supplies they had.

Because of the extreme loss of fluids, without antibiotics many patients would die unnecessarily, he explained to the military at the time.

As Ye Phyo Kyaw remembered the scene, his eyes brimmed with tears.

“They were gone…so many gone,” he said, his voice trailing off.

Soon, Ye Phyo Kyaw said, doctors at Pyapong Hospital received instructions from the Ministry of Health: Do not record the diagnosis as gastroenteritis or diarrhea. Ye Phyo Kyaw said he was warned that if he diagnosed the cases as diarrhea, he would be fired. It was quickly apparent to him that the military was more concerned that revelations of a widespread outbreak would embarrass the junta than it was about saving lives.

Speaking in English, he said, “As a doctor I feel like I am breaking my own ethics. I see that this is the disease, but why can’t I diagnose or write it or speak up?”

Four months later, he was transferred to a different hospital far from Pyapong.

Under the military regime, Myanmar’s public health system was virtually non-existent. The government spent just 1.9 percent of its gross domestic product (GDP) on health care in 2007, the lowest rate among all countries for which the World Health Organization gathered data. In 2008, the country had one of the highest rates of infant mortality in Asia, second only to Afghanistan.

Government expenditure on health care has doubled under the new leadership. Still, Myanmar currently spends less than $2 per citizen annually. Tuberculosis, HIV and malaria are nearly twice as common in Myanmar than the regional average of Southeast Asia. Though there are signs of improvement, limited access to health care and a lack of infrastructure continues to plague the country, particularly in rural areas such as the Delta.

Bogalay Township Hospital, built in 2011, provides treatment free of charge, and a recent increase in the Ministry of Health budget has resulted in coverage for the latest generation of antibiotics, even in non-emergency cases.

But constant power outages impact health care as well. With the power that seems to be off more often than it is on, treatment is frequently administered by flashlight. A machine for testing blood samples has never been used because it can only function with consistent electricity.

Throughout the hospital, the smell of feces wafts from flooded toilets, which head of the hospital Dr. Yin Yin Moe admits is a serious sanitation issue for patients and employees. But she quickly adds, “We have no control” over the problem due to the hospital’s low-lying location. She says she has repeatedly asked the municipal government to help remedy the situation.

Dr. Yin Yin Moe must sometimes provide treatment herself because the hospital has a difficult time attracting and retaining doctors, she said. For example, the hospital was built to accommodate 20 assistant surgeons, but today the hospital has only four.

For many of the Delta’s 3.5 million residents, village clinics are the primary option for health care. These clinics, typically run by a single nurse, provide basic primary care though critical cases are referred to the regional hospital — a long boat ride on the Irrawaddy.

Daw Tin Myaing, 56, runs the government clinic in Kan Su West village. Trained as a nurse and midwife, she is the sole paid health care practitioner in the area, providing basic treatment and health education for 4,680 people living in a dozen villages. She sees an average of 10 patients a day, mainly for seasonal illnesses such as mosquito-borne dengue fever or minor injuries such as snakebites that farmers often receive while working in the rice fields.

She says that she has seen tangible improvements in the health of her villagers since Cyclone Nargis. International Non-Governmental Organizations (NGOs) have provided supplies such as mosquito nets and materials for building toilets, reducing the spread of disease and improving sanitation.

Since 2010, a joint initiative between the Ministry of Health and the International Organization for Migration (IOM) has paid to transport women with complicated pregnancies from rural villages to deliver their babies in the government hospital in Bogalay.

Saw Tin Myaing praises the program, pointing to a low rate of maternal death and improved health of young children. She said a child under five hasn’t died in the local group of 12 villages in recent memory, nor has a mother during childbirth.

But the nurse admits that she can provide “only the minimum” for the villagers in her area. For advanced treatment, villagers must travel far distances by boat to private clinics or hospitals, requiring them to take out loans from fellow villagers to pay for transport that is often equivalent to several days’ work.

“If you don’t have money, you can’t reach the care you need,” she said.

She had a recent patient who waited nine months before seeking treatment for his tuberculosis, despite her urgings.

On a recent morning, Thandar Moe, 36, visited the clinic to ask the nurse for medication for her sister Khin Mar Thet, 26, who suffers from a toxic goiter, a swollen nodule in her throat, often a result of iodine deficiency. She had run out of medication six days before and was dizzy and vomiting as a result, making her unable to work in the family’s rice field.

The nurse can only offer an over-the-counter nausea medication, and suggests they purchase the drugs at a private clinic in Bogalay, about 45 minutes away by boat. But the next boat was not until the following morning.

A monthly dose costs 6,300 kyats, or about $6 — equivalent to more than two-and-a-half days work for her family.

Sitting on the floor of the nurse’s two-room clinic, Khin Mar Thet admits that she doesn’t take her medicine daily as prescribed; she only takes it when she feels ill. It has been a full year since Khin Mar Thet visited Yangon General Hospital for radiology, despite the fact that her doctors there told her she needed to come every month.

“The cost of traveling, the cost of staying there for several days, it is too expensive, we can’t afford it... We only have just enough food to eat. We can’t pay for more than that,” she says.

“If I could access a clinic with the medication, I would take it every day,” she added.

The village nurse blames a lack of health education as the biggest challenge in treating rural villagers. She often has patients who don’t complete a full dose of antibiotics and then relapse, or wait too long to seek treatment because of the travel costs involved.

Dissatisfaction with the government health care sector has contributed to a growing private health sector throughout the country. Two years ago, Ye Phyo Kyaw, 31, opened his own private clinic, called the Na Di specialty clinic in Bogalay.

His hair has turned a shade of gray in the years since Nargis. His remains one of only a handful of clinics in the town, offering appointments for between $1.20 and $3 per visit. That price often includes antibiotics.

With a staff of about 20, the clinic will see up to 60 patients a day, almost all of whom travel many hours by boat from rural villages in the delta. Ye Phyo Kyaw said he and his wife, who is also a doctor, live above the clinic so that someone is available to see patients 24 hours a day.

Ye Phyo Kyaw said he believes that Myanmar’s recent political changes must go hand in hand with improvements in public health. Despite the challenges, he says he is upbeat about the country’s future.

A blog he started writing earlier this year about his life as a doctor in the Delta is called “The Optimist.”

For more about the Special Report from GlobalPost co-founder and editor-at-large Charles M. Sennott, as well as a three-minute video about the project filmed in Myanmar, please visit GroundTruth in Burma.