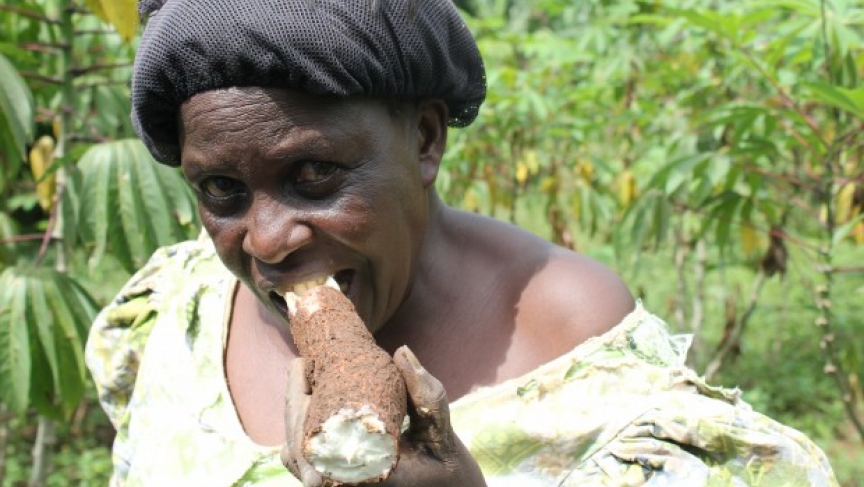 Farmer Eva Mugalu grows cassava along with more than a dozen other crops. She says she gets her cassava cuttings from friends, and never uses fertilizers or pesticides. She isnt aware of the controversy over genetically engineered crops. (Photo: Jon Miller)

Cassava is a vital staple in Africa and one of the most climate-resilient crops anywhere. It's also highly susceptible to viral diseases. In Uganda, scientists are testing a virus-resistant transgenic variety, which they hope to introduce for free. But it's run into a buzzsaw of hostility to genetically modified foods. Can this—or any—GMO succeed in the face of such determined opposition? Should it?

Cassava is not what you’d call a glamor crop. Above the ground it’s a tall, spindly shrub. The edible parts—the roots—look like gnarly logs; boil them up and they’re gluey and bland. In Uganda, banana is by far the more popular carb. But cassava might be more important to the thousands of small farmers like Edward Kibuuka.

Kibuuka rents half an acre of land in a village north of Uganda’s capital, Kampala. For income he tends a tiny patch of chili peppers and raises a few chickens. But cassava is his lifeline.

“The land is too small, the income is very, very small,’ Kibuuka says. “So I have to survive on this cassava.”

In Uganda, as in many parts of Africa, cassava is the ultimate food security crop. It can grow almost anywhere. It produces prodigiously. You don’t need to buy seeds—you just use cuttings from last season’s crop. Other staples need to be picked and eaten before they rot, but cassava can stay in the ground for years. It tolerates high temperatures and flooding and drought—perfect for the climate that’s coming.

But here in East Africa, it’s under attack.

On his tiny plot, Kibuuka pulls up a root and slices it with his machete. The white flesh is riddled with brown marks.

“You cannot consume this cassava,” he says.

The culprit is Cassava Brown Streak Disease. It first appeared in Uganda in 2005 and it’s now sweeping through the country.

I ask him how it feels to plant a crop, wait a year, then pull up nothing but rotten roots.

“You feel frustrated, discouraged, and hungry,” he replies.

A few miles down the road, scientist Titus Alicai thinks he has a solution: cassava plants that have been transformed for resistance to Cassava Brown Streak Disease.

Alicai is a cassava breeder for Uganda’s national crop research institute. He takes me into a shaded nursery full of thousands of small plants.

“We have copied information from the two viruses that cause Cassava Brown Streak Disease,” Alicai says, “and introduced that into the cassava tissue to trigger their immune defense system.”

But in the transgenic cassava, the virus fragments are introduced into popular local strains. In theory, the only difference is that they won’t be ruined by Brown Streak Disease.

The plan is to test them for health and environmental effects, then to give cuttings to Ugandan farmers for free, maybe as early as 2016. That is, if the country decides it can live with genetically modified organisms, or GMOs.

Which is far from certain.

Richard Mugisha, who works with a non-profit that promotes small-scale sustainable agriculture and is part of a coalition called the Food Rights Alliance, insists that Uganda doesn’t need GMOs.

“We are worried, very worried,” Mugisha says. “Because we know that once GMOs are introduced in a country, there would not be any other seed! Our traditional seeds will be wiped out completely, and that means they would make our farmers depend entirely on multinational companies.”

No one else I talked to made that claim, but for many here, as in the broader international movement against GMOs, genetic engineering and Monsanto are pretty much the same thing.

Gregory Jaffe, with the Washington-based consumer group the Center for Science in the Public Interest, calls Monsanto “the gorilla in the closet. They are this technology’s and this industry’s spokesperson.”

Jaffe says Monsanto has aggressively pushed GM crops around the world. And its fingerprints are on the efforts by many others to create GM products for low-income farmers—including the disease-resistant cassava, which was developed at a research center with close ties to Monsanto.

But Jaffe says it’s important to separate the technology from the company.

While he says there are real concerns about agricultural biotechnology or genetically modified organisms, the international debate around genetically engineered crops “has become an ‘us versus them’ type of thing. You have proponents on one side who talk in generalities, who say this is safe, it’s beneficial. And you have opponents on the other side who say it’s not safe and not beneficial. And the reality is you need to look at each specific application.”

And those can vary a lot. One GM crop may repel insects, another may tolerate drought, another may have more vitamins. They may behave differently in the environment or in the body. Then there’s the question of how they’re distributed and who gets the profits.

Uganda’s parliament is considering a biosafety law that would weigh the risks and benefits of GMOs on a case-by-case basis. Supporters say it’ll help the country take advantage of a powerful technology. Opponents worry that the law will be too hard to enforce.

And yet both sides admit that the argument hasn’t really reached the people who would be growing the crops.

Eva Mugalu raised eleven kids on three acres of land. She walks past piglets chomping on cassava leaves and into her cassava patch, where she pulls up a brown-streaked root.

“You see, that is a sickness, Mugalu says.

She pulls up another, which is fine. She cracks it in half, shaves off some skin and takes a bite, then offers some to me.

It’s kind of like eating a raw potato. But we’re talking survival here, not haute cuisine.

Mugalu says she isn’t aware of the controversy over genetic engineering. She says she doesn’t really care where her crops come from, as long as they’re safe, and they’re there when she needs them.