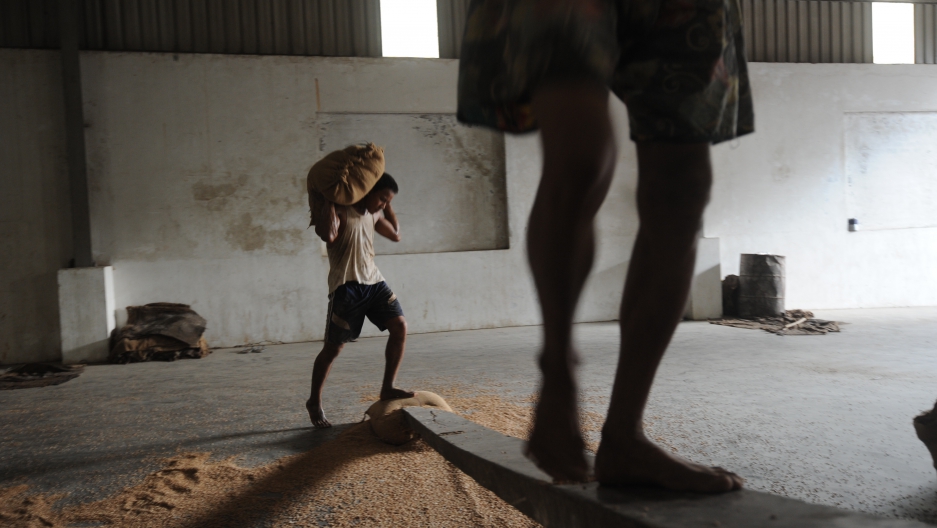 Myanmar workers carry goods as they prepare to store at a factory in Hlaing Thar Yar Industrial Zone in Yangon, Myanmar on June 17, 2013.
Credit: Soe Than Win
Share

YANGON, Myanmar — In the back of the Sanchaung Township courthouse, where bureaucrats clack away on aging typewriters, a short dirt path leads to the jail.

Behind wooden bars sit three young labor organizers from the Taw Win wood and furniture factory. They have been imprisoned for more than a month, accused of leading an illegal protest and destroying property during a lengthy dispute with their employer.

In the women’s section, Ei Zar Phyu, 24, wears a yellow blouse and sniffs eucalyptus at regular intervals to stay fresh. The walls are stained red with betel nut spittle; visitors hand prisoners meals packed in white styrofoam. A door sized for a child's playhouse is the cell's only exit.

Nay Lin Oo, 21, and Zin Myo Ko Ko, 22, are in the men's section. All were arrested following a violent altercation at the factory that, for many here, has come to symbolize the weaknesses in the country’s new labor rights laws. In 2011, the country's new, reformist government passed a law that permits unions and strikes, making them legal for the first time since 1962. A second law governing disputes soon followed.

Since then Yangon’s factory workers have formed an estimated 600 unions. Many have gone on strike, sometimes gathering by the thousands. Some have signed new contracts with employers, negotiating small pay raises or pushing management to add extra bathrooms or rest days.

But many inside and outside the country say Myanmar has yet to create a framework for productive, lasting worker-employer dialogues that will protect workers and ensure that employers have a safe, reliable workforce. Employees say they are fired, jailed and beaten for organizing. Employers say workers strike even after they agree not to.

"In the previous government we could not protest," said Nanda Sit Aung, 32, a former political prisoner who recently founded a worker rights center in Hlaing Thar Yar, a Yangon industrial zone with more than 500 factories. "We were arrested, interrogated, tortured. In the new government, we can protest, but we get nothing."

After years of isolation, Myanmar is poised for rapid economic growth. According to the consulting firm McKinsey, which released an extensive report on the country's economic potential last month, a smartly-managed Myanmar could quadruple the size of its economy by 2030. Such growth could create an estimated 10 million nonagricultural jobs.

This line of analysis says the manufacturing industry will be the country's golden ticket out of poverty. But many Western investors insist they will only put capital into Myanmar if the government demonstrates it will enforce the new laws it passes.

And particularly after a disaster in Bangladesh killed more than 1,000 garment factory workers, investors care not just about how cheap the labor is — but about avoiding labor catastrophes.

"There's potential in the new system here to avoid a Bangladesh situation," said Ross Wilson, who runs the Freedom of Association Project at the Yangon office of the International Labor Organization. "But it's not done by simply ignoring the problems and defects in the law and the system."

The efficacy of the labor laws, said Sean Turnell, an economist and Myanmar expert, matters to investors for both "soft-hearted" and "hard-headed" reasons. "It's not just about human rights and labor rights," he said. "It is about having an environment that is politically and economically stable that delivers productivity.’’

The 2011 Labor Organization Law grants workers the right to unionize and strike and prohibits employers from retaliating against those who do so. The 2012 Labor Dispute Law requires employers to comply with agreements made before a conciliation body. Penalties for employers who break the laws, however, are light — no more than $100 or less than year in jail.

Across Yangon, then, there are factories where workers have struck for weeks at a time, come to an agreement with their employers, smiled in front of the media and parliamentary officials, and then had nothing change.

"I've had many cases where workers have come and said, 'We've reached a settlement and the employer is ignoring it,'" said Wilson. "That can only last for so long before workers become disillusioned with that process and try more direct and confrontational ways of getting results."

At the Taw Win timber factory, about 200 newly unionized workers struck in September 2012, objecting to an effort by management to move them from the company's furniture production factory to a construction site owned by the same family. In October, union members and management signed an agreement created by an arbitration council. The agreement stated the company would keep factory workers in the factory, and workers agreed not to strike for a year.

The company's production manager, U Myint Aung, said the striking workers were originally construction workers, not factory workers, and therefore were not required to return to factory jobs under the agreement.

On December 24, 2012, the dispute culminated in a fight on the grounds of the five-acre factory complex. Manager U Myint Aung said workers broke in and destroyed property while management was at lunch. As proof of the raid, he shared an album of photographs taken by an informant embedded with the strikers. Each worker is neatly identified by name. Some workers hold sticks in the air.

The strikers say they were attacked at the factory by managers and their affiliates. U Than Naing, the father of employee Nay Lin Oo, shared his son's medical records as proof: injuries to the chest, limbs and buttocks. Nay Lin Oo was hospitalized for 10 days. U Than Naing said he sold his house to pay the $600 bill, tearing it apart, piece by piece, to sell the wood.

Who was at fault that day?

"It's hard to say," said Wilson. "But one thing is for sure, if the employer had complied with the reinstatement order, then the situation wouldn't have arisen."

Other employees at Yangon factories say their employers have ignored the new labor laws. Kyi Kyi Lin, 33, has worked in garment factories since age 18. She joined a union, but said she was fired in January for her organizing activities. She called for an amendment that more harshly penalizes employers. "If the government cannot protect the workers," she said, "then this will happen again to someone else."

In 2011, Myanmar also passed the Right to Peaceful Assembly and Peaceful Procession Act, which guarantees the right to gather and march, but requires a permit to do so. Punishment for illegal assembly is up to a year's imprisonment. The law is sometimes used to arrest labor organizers who carry out their work away from the grounds of their factories.

At Taw Win, after the arbitrated agreement was ignored, several frustrated labor leaders decided to bring their grievances to a local labor ministry. First they went to the labor ministry in Shwe Pyi Thar Township. No one would speak with them, their lawyer later recalled, so they moved on to the labor ministry at Insein, then Mayangon, then Sanchaung. They sometimes traveled on foot because they didn't have car fare.

The group had not conceived of their pilgrimage as a protest — there were no signs or chants — but the government nonetheless considered it one, said the lawyer. Nay Lin Oo, a bookish employee who had quit school to become the family breadwinner, was in that group. So were Zin Myo Ko Ko and Ei Zar Phyu, who had met at the factory, and were about to be married.

A few weeks after the procession, policemen in dark blue pants and gray shirts rode into Shwe Pyi Thar Township, where the three live, and arrested them. About a dozen others met the same fate.

"I don't regret what I did," said Ei Zar Phyu, speaking from the jail behind the courthouse.

Her mother said she feels differently.

"When my daughter was taken away, I was so angry," said Daw Htay Htay Win, 50. "I followed that car. I wanted to hit that car. Everyone around me said, 'Don't do that, your daughter is working for the country. Be proud of her.' I am really proud of my daughter, she's brave. But I don't want her to be in trouble."

Not all labor organizers are jailed under the Peaceful Assembly Law. But "the very small minority of cases, like the Taw Win case, that actually become national news stories set the tone to some extent," said Wilson. "And that publicity has a chilling effect on other workers' willingness to exercise their rights."

On June 21, Ei Zar Phyu was released after 36 days in custody. The two men remain in prison. They await trial and the possibility of a year-long sentence.

In Myanmar, factory workers make around $3 a day, one of the lowest wages in the region, according to McKinsey. Interviews with about two dozen workers suggest wages are even lower, hovering somewhere between $1.50 and $2.50 a day. In those interviews employees cited a number of grievances: work days that sometimes last 12 hours; fines for broken equipment; bathrooms meant for 1,000 people; lack of pay for overtime.

An effective union-employer dispute process could create meaningful changes for many families, especially as a large part of the country's population shifts from farmer to factory worker.

Some say that such a system may also help businesses. "We've known for a long time that organized labor can actually deliver higher productivity gains," said Turnell, the economist. "Labor productivity is much higher in countries where labor tends to be more expensive, simply because it gives incentives to employers to make that labor more productive."

In his office, U Win Shein, director general of the country's Factories and General Labor Law Inspection Department, said he's been working to mediate disputes. He's said he's aware that in the wake of the disaster in Bangladesh, the world's eyes are on workers' conditions in new markets.

He said the lack of strong penalties in the labor laws is a weakness, and he called for an amendment that adds "effective and appropriate punishment" for employers and employees who violate them. "Amending the law is very important," he said. "We will allow nothing similar" to Bangladesh.

He also urged patience from the international community. "The country is in a developing stage," he said. "There are lots of laws that need to be amended. It will not be easy or quick."

For more about the Special Report from GlobalPost co-founder and editor-at-large Charles M. Sennott, as well as a three-minute video about the project filmed in Myanmar, please visit GroundTruth in Burma.