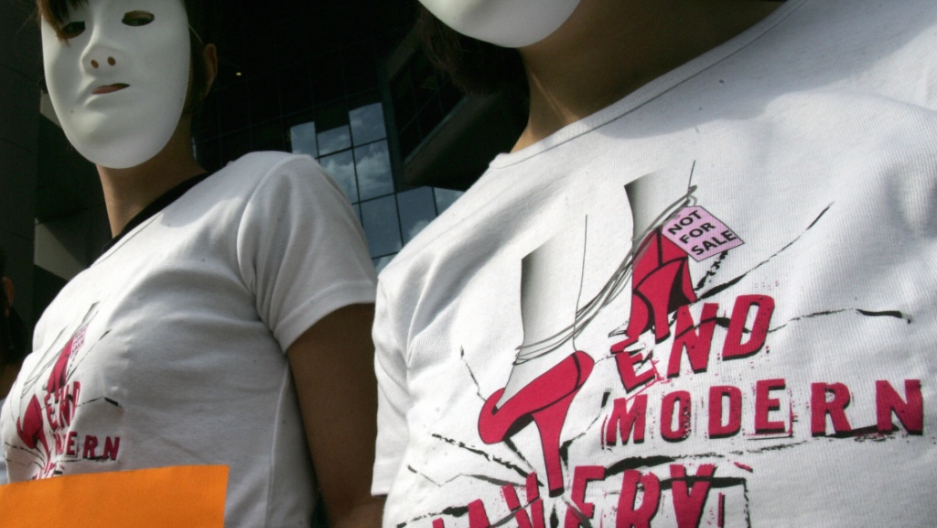 Amnesty International activists wearing T-shirts reading 'end modern slavery' protest against human trafficking near the Ministry of Justice in Athens on March 7, 2008 a day before the International Women Day. According to Amnesty International, Greece has been a transit and destination country for trafficked persons since the early 1990s.
Credit: Louisa Gouliamaki
Share

A Saudi princess has been arrested for human trafficking in Southern California.

42-year-old Meshael Alayban allegedly held a Kenyan domestic worker against her will and forced her to work in the princess' condominium in Irvine.

Alayban is one of the wives of Saudi Prince Abdulrahman bin Nasser bin Abdulaziz al Saud.

The Los Angeles Times reported the 30-year-old Kenyan woman said she was forced to work 16 hours a day, seven days a week, for $220 a month and that her passport had been confiscated.

She was due in court for arraignment Thursday on one count of human trafficking after being charged a day earlier.

Alayban was arrested after the woman fled the condo, boarded a bus and went to the police, who later searched the princess' home.

More from GlobalPost: Sex trafficking snares hundreds of thousands of US kids

At the home, authorities found four other women who said their documents had been taken, all of whom also wanted to leave their current situation.

On Wednesday, a judge set Alayban's bail at $5 million, banned her from fleeing the country, and ordered her to wear a GPS monitoring device.

"This is not a contract dispute," District Attorney Tony Rackauckas responded. "This is holding someone captive against their will."