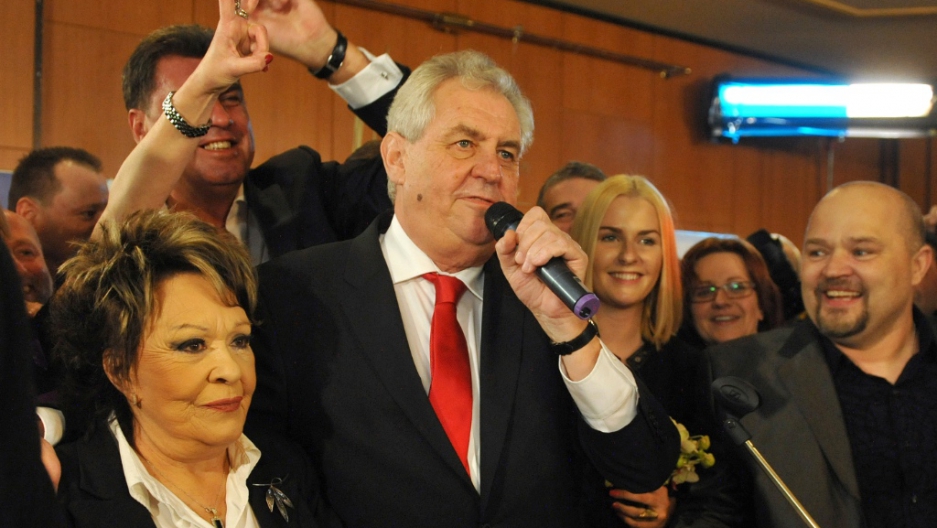 Czech new-elected President Milos Zeman (C) speaks during a press conference on January 26, 2013 in Prague, after the result of the second round of the Presidential elections. Czechs chose outspoken veteran leftist Milos Zeman, an ex-premier, as their new president in the runoff of the EU republic's first direct election.
Credit: Michal Cizek
Share

Czech President Milos Zeman swore in a new cabinet Wednesday made up mostly of political allies, while ignoring nominees put forward by parliament, subsequently deepening the political crisis there.

Zeman's new government, which appointed leftist Jiri Rusnok as prime minister and longtime political operative Jan Fischer as the new finance minister, must receive a vote of confidence from parliament within 30 days, according to the German newswire DPA.

There is only one woman represented in Zeman's 14-member "government of experts," the BBC noted.

Opposition parties hold a weak majority in the Czech parliament, but a fierce pushback is expected against the move by Zeman.

The Czech Republic is in the midst of a political crisis with ongoing allegations of corruption and illegal government surveillance programs, but the Economist said Zeman's political integrity was questioned "[m]ore or less immediately after he took office in March."

According to the Economist, Zeman "started to see how far he can go in expanding the power of the presidency."

This latest cabinet move suggests he is "taking advantage of the ongoing government crisis," the Economist argued, noting that the cover of the popular Czech political magazine Respekt showed Zeman outfitted like the Roman Emperor (check that out here).

Zeman has advised his allies to ignore the allegations of "invidious fools."