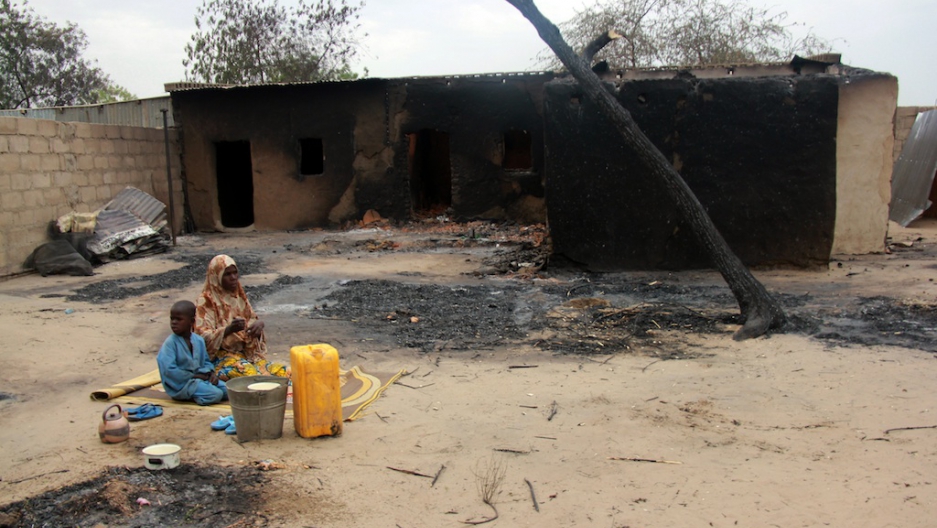 Children sit in front of a burnt house in the remote northeast town of Baga on April 21, 2013 after two days of clashes between officers of the Joint Task Force and members of the Islamist sect Boko Haram on April 19 in the town near Lake Chad, 200 kms north of Maiduguri, in Borno State. Nigerian rescue workers set up temporary camps in Baga on April 25 and distributed aid to the masses displaced by brutal fighting that left 187 people dead. The bloodshed in Baga likely marked the deadliest-ever episode in the insurgency of Boko Haram, a radical group which has said it wants to create an Islamic state in northern Nigeria.
Credit: Stringer
Share

Thirty people have been killed in an attack on a northeastern Nigeria boarding school, after gunmen alleged to be affiliated with the extremist Boko Haram group stormed the campus, shooting some children and burning others alive.

"We were sleeping when we heard gunshots," said 15-year-old Musa Hassan to the Associated Press who was shot in his writing hand, losing four fingers. " When I woke up, someone was pointing a gun at me."

Hassan said the gunment used a jerrycan full of fuel to torch a hostel and an administrative building, burning children alive. Many of the bodies are too badly charred to be identified, leaving many parents in doubt as to whether their children managed to escape the attack alive.

"We received 42 dead bodies of students and other staff of Government Secondary School (in) Mamudo last night. Some of them had gunshot wounds," Haliru Aliyu of Potiskum General Hospital told AFP, quoting escaped witnesses.

The United Nation's children's fund (UNICEF) called for everyone to condemn the attack, noting that by their count 48 students and seven teachers had been killed since June 16, when Boko Haram said they would target youths.

"We have established that the youth in Borno and Yobe states are now against our course," Boko Haram spokesman, Abu Zinnira, said in a statement last month. "They have connived with security operatives and are actively supporting the government of Nigeria in its war against us. We have also resolved to fight back."

The attack took place at the Government Secondary Schoo in Mamudo town in Nigeria's Yobe state, and appears to be the latest in a series of violent attacks on schools instigated by Boko Haram, which is stridently opposed to Western education. "Boko Haram" translates directly to "Western education is sacrilege."

Yobe is one of the states where Nigerian President Goodluck Jonathan implemented a state of emergency in May, in response to an increasing number of such terrorist attacks.

Boko Haram has killed 1,600 in terrorist attacks throughout the nation since 2010, according to the Associated Press, targeting health workers, teachers, and government workers in their violent raids.