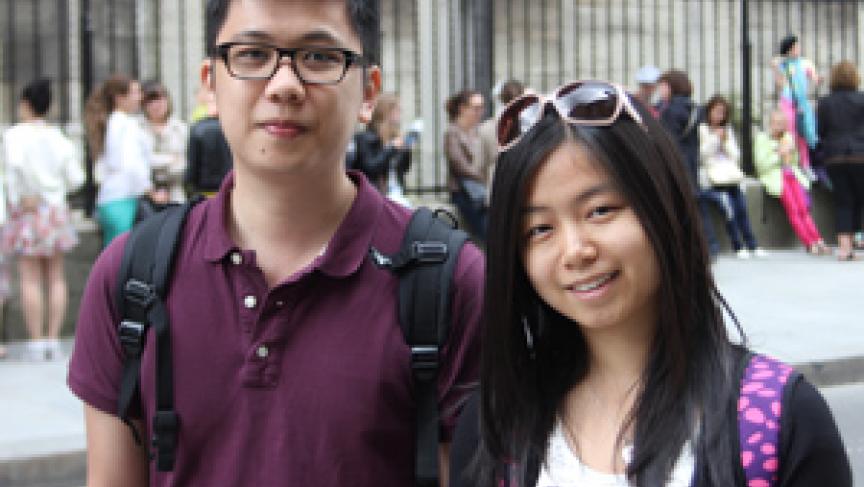 Here's a quick quiz. What's the country most visited by tourists?

It's France, which welcomed nearly 80 million foreign visitors in 2011, according to the United Nation's World Tourism Organization. For most travelers to France, Paris is the first stop. But the French capital isn't taking that for granted. This summer it's rolling out a campaign called "Do You Speak Touriste?" to teach hoteliers, taxi drivers, and anyone in the tourists trade, how to be nice to foreigners.

Yes, the French have a reputation for being rude. But do they deserve it?

"I am French, so I am not able to judge," says Philippe Solignac, with the Paris Chamber of Commerce.

He says even if that reputation is undeserved, it can't be allowed to threaten one of the largest contributors to the Paris economy.

"Tourism represents ten percent of employment in our city," he says, which is why the Paris Chamber of Commerce is trying to teach Parisians to be more, well, accommodating. It's distributed 30,000 pamphlets with tips on tourists' likes and dislikes, and lessons in visitor languages — skills that might help that French waiter be just a little nicer.

"If the waiter can have a few words of welcome, like 'How are you today?' and 'How can I help you?' maybe we wouldn't be as rude as the reputation seems to be."

Here's a sample of some of the dialogue from the campaign's website.

PATRON: Hello, I would like to make a reservation for four people.
RESTAURATEUR: Yes, of course. What time would you like to come in?

So could the stereotypical rude French waiter be a thing of the past? I spoke with an expert — Roland Sagnear, a waiter at a Paris restaurant. Sagnear draws on another classic stereotype: the stupid American, who Sagnear says is actually very easy to please, with cuisine that Parisians consider ordinary.

He says that American visitors say, "'Ah, this food, the wine.' All is cool for the American people because they don't know the taste of good wine or the taste of food."

Okay, we Americans probably deserve that. Meantime, Sagnear has his own advice to make tourists friendlier. For example, he points out that every social interaction in France starts with "Bonjour" (hello). It's a sign of respect.

But this story is about how the French can be nicer to everyone else. In that effort, the campaign includes tourist profiles of different nationalities, what they do and what their customs are – for instance, whether or not they have a nice waiter, the growing number of Chinese visitors here struggle with long French dinners that linger late into the night.

"That's really crazy for Chinese," says Michelle Oyang, a tourist from China that I met outside Notre Dame Cathedral. "Chinese always finish their meal around 8 pm."

And what do the French think American habits are?

"I don't know what they think, I really don't," says Jerolyn Carroll. She and her friend David, who didn't give his last name, are visiting Paris from the state of Georgia.

Basically, the Paris Chamber of Commerce believes Americans eat dinner at 6pm, that we spend about $180 dollars a day in Paris, and that we have to have a good WiFi connection.

"Yes, WiFi, that's what the average American wants," says David from Georgia. "It's just a part of the life now."