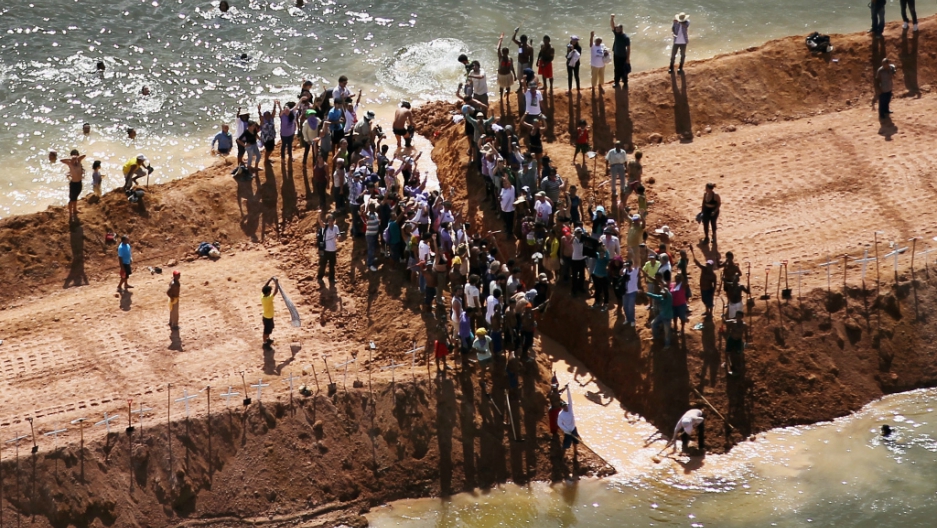 Residents who are being displaced by the Belo Monte dam and supporters stand atop a temporary earthen dam at the Belo Monte construction site after removing a strip of earth to restore the flow of the Xingu River as a protest against the construction on June 15, 2012 near Altamira, Brazil. Belo Monte will be the world’s third-largest hydroelectric project and will displace up to 20,000 people while diverting the Xingu River and flooding as much as 230 square miles of rainforest. The controversial project is one of around 60 hydroelectric projects Brazil has planned in the Amazon to generate electricity for its rapidly expanding economy.
Credit: Mario Tama
Share

The dams often flood vast areas of rain forest, leading to a major loss of biodiversity and the devastating displacement of indigenous communities from their ancestral lands.

That is justified, President Dilma Rousseff claims, because they help fight climate change.

“[Hydroelectric power] does not emit greenhouse gases, and that means we have a renewable energy project,” she said when recently inaugurating one Amazonian dam.

Yet, according to independent scientists, that claim does not stand up to scrutiny.

In fact, the dams may even be causing Brazil’s carbon footprint — already the world's third largest, according to the International Energy Agency — to expand significantly, dumping hundreds of millions of additional tons of the gases blamed for climate change into the atmosphere.

For example, one Amazonian dam, Tucurui, was once calculated to have greater emissions than Sao Paulo, Brazil’s largest city and among the 10 most populous in the world.

The reason for that is very simple. The huge stretches of rain forest flooded to create dam reservoirs, often running into hundreds of square miles, rot in the water, emitting greenhouse gases.

The stumps of trees protruding from the water give off carbon dioxide. But the worst impact comes from below the surface.

Vegetation decomposing at the bottom of the reservoir, where there’s little or no oxygen, release methane, a gas whose greenhouse effect is 25 times stronger than that of carbon dioxide.

The science is complex, but much of that gas is released as the water passes at a lower pressure through the dam’s turbines, emitting bubbles in a chemical process similar to the one that produces a hiss of carbon dioxide when a bottle of soda is opened.

For some dams that means a huge carbon emissions spike that lasts years and even decades after they first begin operations before eventually tailing off.

But for others, where the level of the reservoir periodically rises and falls dozens of feet — repeatedly allowing vegetation to flourish on its edges and then re-flooding that new growth — the methane emissions never stop.

Philip Fearnside, an American professor at Brazil’s National Institute for Amazon Research (INPA) who studies the issue, warns that the dams’ emissions spikes could not come at a worse time.

Protesters removed a strip of earth of a temporary dam at the construction site of the Belo Monte dam, set to be the world's third largest, to restore the flow of the Xingu river, in June 2012 near Altamira, Brazil. Mario Tama/Getty Images

He singled out Belo Monte, an enormous, highly controversial $22-billion dam planned for the Xingu river in the northeastern Amazon. It’s projected to generate enough electricity to power 18 million households, making it the third most powerful in the world.

Yet Fearnside says the Belo Monte complex, including another dam upriver to regulate flow, will also give off 11.2 million tons of carbon per year for its first decade in operation — the equivalent annual emissions of 2.3 million cars.

Worse still, it will take Belo Monte 41 years before its greenhouse gas emissions break even with those of a fossil fuel plant generating the same amount of power.

“The hydro industry likes to make its calculations based on a 100-year lifespan but that ignores the fundamental fact that if you build dozens of dams in the Amazon now, exactly as the world needs to reduce emissions quickly before the effects of global warming become even more serious, the spike is happening right in that critical period,” he said.

Indeed, Eletrobras, the state energy company with a 15 percent stake in Belo Monte, is even applying for carbon credits potentially worth hundreds of millions of dollars from the World Bank for some of its Amazonian dams based on the fact that, supposedly, they release fewer greenhouse gases than fossil fuels.

But neither the Brazilian government nor the companies behind the dams appear interested in publicly discussing the issue.

Brazil’s energy ministry did not respond to GlobalPost’s requests for comment.

Meanwhile, Eletrobras referred our questions to Norte Energia, the consortium running the project. But Norte Energia sent GlobalPost back to Eletrobras.

However, Norte Energia did respond — sort of — to one of Fearnside’s research papers, forwarded to it by GlobalPost, on the issue of carbon emitted by hydroelectric dams in tropical rainforest. By email, the company replied: “We do not comment on academic studies.”

That brought a withering response from Brent Millikan, the Amazon program director of International Rivers, a US NGO that campaigns against large dams in the developing world.

"This is an extraordinary admission,” he said. “They are effectively saying they are not interested in the latest science and by implication that they don't even care about the carbon emissions that independent scientists are warning the dam will generate, through both reservoirs and deforestation in the vicinity of the project.”

Belo Monte is one of a total 60 dams the Brazilian government wants to build in the Amazon, and whose reservoirs will flood roughly 3 percent of the world’s largest tropical rain forest — an area equivalent to Michigan.

Environmental and human rights campaigners have long railed against the plans because of the huge loss of biodiversity warehoused in the tropical rain forest — the world’s most complex ecosystem — and the impacts on local communities, including indigenous peoples.

Paulo Barreto, a forester at Imazon, a Brazilian nonprofit think tank that specializes in Amazonian conservation, has calculated that Belo Monte will lead to indirect deforestation, also excluded from official carbon footprint calculations.

That forest loss, totaling 2,052 square miles, will be caused by an influx of people settling near the dam, and will result in 267 million tons of carbon emissions, he has calculated.

“They simply don’t estimate the full costs such as indirect deforestation. What they [the government and dam consortia] present is very partial.”