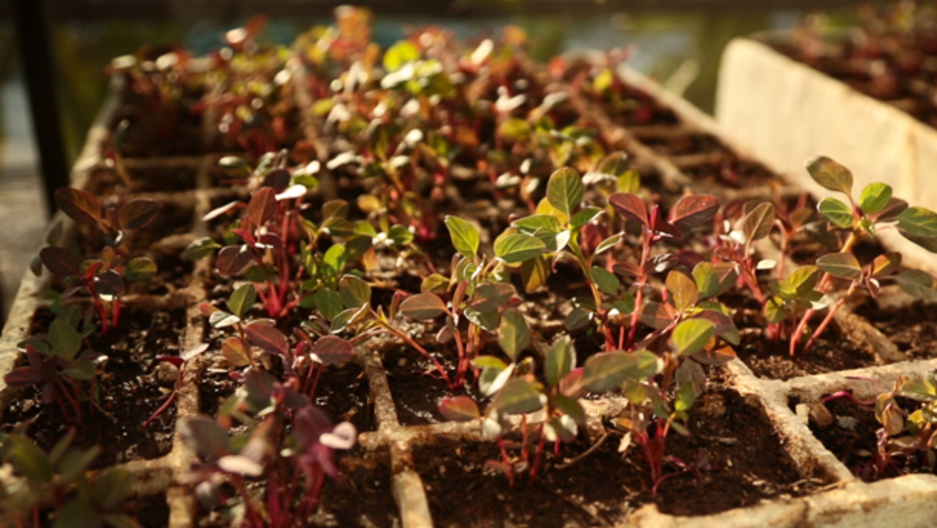 Amaranth seedlings being grown in southern Mexicos Tehuacan valley. The plant's seeds are high in protein and its leaves are high in iron, vitamin C and calcium.

Once as fundamental to Central and South American diets as corn and beans, amaranth virtually disappeared after the Spanish banned it because of its use in Aztec human sacrifice rituals. Now there are efforts to bring it back as a staple in Mexico, for its both superior nutritional qualities and its resistance to the pressures of a changing climate.

In some ways this is a tale of two seeds — corn and amaranth. Both were domesticated long ago in southern Mexico’s Tehuacan valley. Both were pounded into flour to make tamales and tortillas. Along with beans, the two were the staples that allowed the Aztec empire to prosper. The difference is that corn went on to become the cornerstone of the world food system, while amaranth went mostly into the history books.

Amaranth’s descent into obscurity began nearly five centuries ago with the arrival of the Spanish and the Catholic Church. Up until then, the Aztecs had considered it a sacred grain — so sacred, says biochemist Mary Delano, that the seeds were mixed with human blood in offerings to the Aztec gods.

Delano says the Spaniards banned both the ritual and the cultivation of amaranth itself. “Even Hernán Cortés said that he would cut the hands of those who planted it, So amaranth was lost.”

That set the stage for Mexico, and much of the world, to become the land of corn. Delano hopes to change that.

“Amaranth has to get back to Mexico,” she says. “It’s Mexico, tierra del amaranto. Mexico, Land of Amaranth.”

“Mexico, Land of Amaranth,” is the name Delano chose for the non-profit she founded to help impoverished women grow amaranth in small kitchen gardens.

Ironically, the effort has the support of the same church that suppressed the pagan seed centuries ago. During a multi-village tour in Queretaro, north of Mexico City, a Catholic priest was part of the entourage, blessing new cisterns that make it possible to grow amaranth year-round.

And that’s important, Delano says, because according the UN Food and Agriculture Organization, amaranth packs more protein than any other plant on earth. She says there’s a reason NASA selected it as part of its astronauts’ diets.

Amaranth leaves are also edible, packing more iron, vitamin C and calcium than spinach. And here in Mexico, Delano’s effort to revive amaranth is getting some help from the climate.

In the arid Tehuacan valley, where farmers first domesticated amaranth and corn, the weather is no longer reliable. “Each day is a risk,” says 51-year-old Juan Nuñez. Nuñez says people are leaving their fields, because they just aren’t profitable anymore.

But that’s for corn farmers. Nuñez himself has been growing amaranth along with corn for the last 30 years, and he’s doing ok. He says during a bad drought a few years back, corn farmers had no harvest. But he says his amaranth did fine.

Nunez sells part of his harvest through a cooperative that processes organic amaranth into flour, breakfast cereal, and snack foods. More than a thousand small farmers have joined the group.

Of course corn is still king in Mexico. It’s grown on more than 3,000 times as much land here as amaranth. But many amaranth growers, academics and public health officials hope to narrow the gap by promoting amaranth as a new staple in the global food chain.

Eduardo Espitia, with Mexico’s National Institute of Forestry, Agriculture and Animal Husbandry Research, says that will take some work, because amaranth is still relatively primitive.

“It still has characteristics of wild plants,” Espitia says. “The seed is very little, very problematic to sow it. So we need to work on all of those things.”

But Espitia says if researchers had even a fraction of the resources devoted to corn, they could develop more marketable varieties.

With rising temperatures, Espitia says amaranth’s ability to withstand triple digit heat makes that prospect all the more appealing. And nutritionists say it would also be a boon for the country’s health, because along with climate change, Mexico is struggling with both malnutrition and obesity.

That’s in part because people have abandoned their traditional foods, says Josefina Morales of the National Institute of Medical Sciences and Nutrition. The dual health crises have become a big priority for Mexico’s government, and as part of their effort, the government recently included amaranth as a strategic resource in its National Crusade Against Hunger.

But making amaranth available is one thing and getting people to eat it is another, a challenge not lost on activist Mary Delano. Back in Queretaro, the tour of the amaranth gardens ends with a village feast, including chips made with amaranth seeds and dip made with its leaves. And in a country where a meal isn’t considered a meal without a tortilla, Delano is slowly winning over converts to her amaranth fortified versions of classic Mexican recipes.

“Beans are wonderful and maize is wonderful,” Delano says, “but a tortilla with maize and amaranth is totally different.”

By itself, amaranth isn’t all that tasty. But adding it to corn doesn’t change the flavor of a tortilla. And the combination of the two makes a complete protein with the nutritional quality of meat.

Delano says sometimes she feels that her efforts are like trying to build a house on the ocean. But with each new cistern and kitchen garden, she sees a movement gradually growing.

“We can make like that domino effect, no?” Delano says. “Maybe little seeds here and there will eventually be everywhere.”

And they might need to be. According to one recent study, Mexico stands to lose up to a third of its corn-centered agricultural production to climate change by 2080. Which means that with or without government support, amaranth might well become once again a grain of strategic, if not sacred, importance.