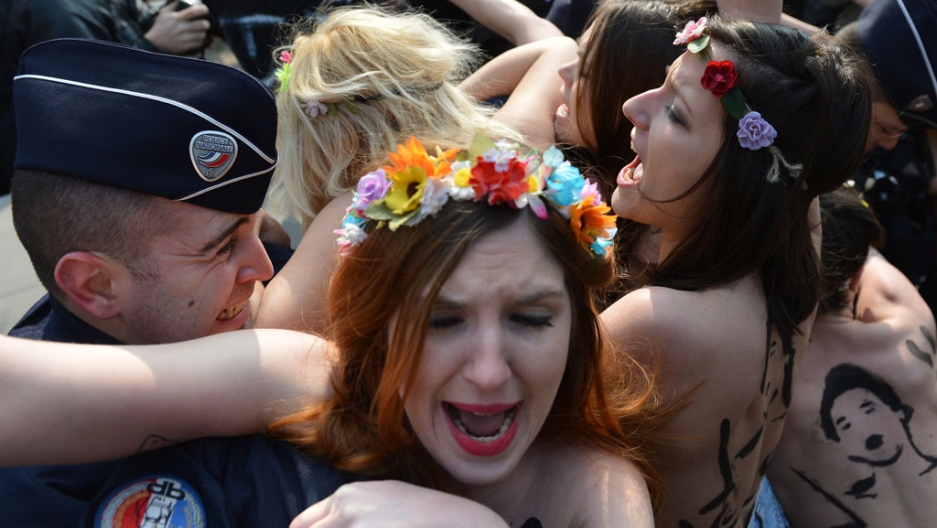 Activists of the women's rights movement Femen face riot policemen during a topless protest near Tunisia's Embassy in Paris on April 4, 2013. Femen called for a day of international "topless jihad" on April 4 with Femen groups staging protests in various European cities in support of Amina, a young Tunisian woman who caused a scandal when she published photos of herself bare-chested on the internet in March.
Credit: MIGUEL MEDINA
Share

A Tunisian court on Wednesday suspended the prison terms of three European women sentenced to four months in jail for a topless protest in support of a detained Tunisian Femen activist.

"The verdict has been delivered. It was a suspended sentence of four months and one day. They are going to be freed in a few hours," said the three women's Tunisian lawyer, Souhaib Bahri.

There was no news on when the women — two French and one German — would return to their countries.

"It is a great joy to have spoken for the freedom of Femen in Tunisia and to have been heard," the defendants' French lawyers, Patrick Klugman and Ivan Terel, told Agence-France Presse.

German defendant Josephine Markmann earlier said to the judge presiding over the case, "I regret this act and apologize" after being told what she had done was prohibited by Muslim law.

"We didn't expect to shock Tunisians to this extent. It is out of the question that we would do it again," said Pauline Hillier, one of the two French defendants.

The protest was the first of its kind in the Middle East for Femen, which has previously used nudity to campaign for greater women's rights across Europe.

The three Femen activists were calling for the release of Amina Sboui, a Tunisian member of the feminist group who created scandal in her country in March when she posted topless photos of herself at a protest online. She was then arrested on May 19 at another protest in the religious center of Kairouan.

Sboui has already been convicted of carrying pepper spray and has been made to pay a small fine.

On the opening day of the three activists' trial, three other Femen members were found by authorities and deported on suspicion they were planning another protest.