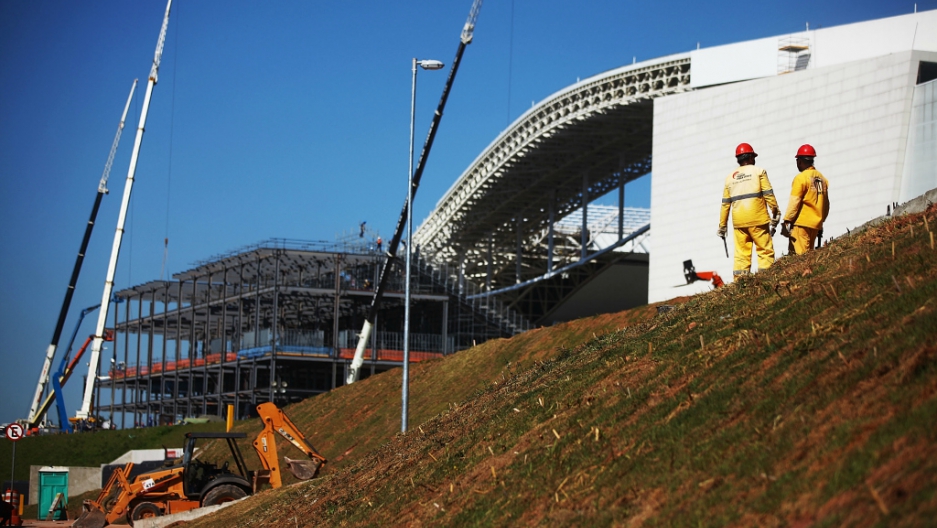 All eyes are on Brazil as the continent’s largest nation prepares to host the World Cup next June and the Summer Olympics in 2016. On paper, these seem like perfect projects for Brazil. They’re worthy excuses to improve infrastructure and public safety in cities that really need it, and the tourism dollars will provide a big boost to an economy that’s losing steam.

But Brazil’s raised major concerns that it may not be ready to handle its host duties. There’s only about a year to go until the massive international soccer tournament, the World Cup, kicks off.

The Confederations Cup — a smaller tourney considered a dry run for the World Cup — began in the country’s capital, Brasilia, on Saturday.

During the opening ceremony, President Dilma Rousseff and world soccer body FIFA’s President Sepp Blatter were met with a chorus of boos when they took the microphone. Why? It probably had something to do with what was going on outside the stadium.

Protests are overshadowing the game Riot police are seen during clashes with protesters near Maracana stadium during the FIFA 2013 Confederation Cup soccer match between Mexico and Italy in Rio de Janeiro, Brazil on June 16. Tasso Marcelo AFP/Getty Images.

“Fiesta inside [the stadium] ... war outside,” is how a newspaper in Brasilia headlined its coverage of opening day of the Confederations Cup. In the last week, small protests have popped up around the country — not all fighting for the same cause. Some protested a bus fare hike, others like those in Brasilia railed against the high cost for upgrades for the World Cup, calling for the money to be spent elsewhere.

As these nonviolent protests began to grow, police struck back with tear gas and rubber bullets to disperse a crowd of 5,000 bus fare protesters in Sao Paulo, Brazil’s largest city, on Thursday night. Dozens of protesters were injured. Several journalists were also targeted — one Brazilian reporter took a rubber bullet to the eye.

With more of the same treatment from authorities at demonstrations outside soccer matches on Saturday in Brasilia and Sunday in Rio de Janeiro, angry Brazilians now have a new reason to take to the streets: police brutality.

On Monday night, more than 200,000 protesters demonstrated, mostly peacefully, in cities across the country. At one point, protesters even stormed the roof of the National Congress in Brasilia. Protests have continued throughout the week and Wednesday night, Rio de Janeiro and Sao Paulo announced a reverse in their initial bus fare hike. More protests were scheduled to take place later this week. There is much speculation as to whether the demonstrations will fade or gain momentum toward fighting for other improvements in public services, education and health care. If this is just the tip of the iceberg, don’t expect the protests to take a backseat to soccer in the headlines anytime soon. General view of the Arena Pernambuco stadium during its official opening, in Recife, Brazil on April 14. Yasuyoshi Chiba AFP/Getty Images.

The six stadiums around the country playing host to the Confederations Cup were all either built from the ground up, or underwent massive renovations ahead of the tournament. However, only four of the six were ready to go by FIFA’s April 2013 deadline. The kicker: that deadline was pushed back from FIFA’s initial deadline of December 2012.

Maracana, Rio de Janeiro’s legendary host of the 1950 World Cup final, has been possibly the worst offender. In addition to repeatedly missing deadlines and running over budget, workers were still prepping the stadium just one day before the Saturday Confederations start date. In fact, workmen were slapping cement onto walls, attaching glass panels and painting at several stadiums on Friday.

Recently, FIFA announced that three of the 12 venues for the 2014 World Cup will not meet their December 2013 deadline. Stadiums in Curitiba and Cuiaba are expected to be finished in Feburary 2014, only four months before the games begin. A police officer cordon's off a crime scene in which a police officer was shot dead, in Sao Paulo, Brazil, on Nov. 14, 2012. Yasuyoshi Chiba AFP/Getty Images.

One highlight of Brazil’s World Cup preparation has been the crime cleanup in Rio de Janeiro, which will also be home to the 2016 Olympics. Police in Rio have cracked down in the city’s “favelas” (shantytowns) and started to convert some of these gang-controlled territories into safe, hip neighborhoods.

Yet some recent blemishes blight Rio’s public safety record. In April, an American woman was beaten and gang-raped in a transit van that picked up her and her companion in Copacabana, a tourist-friendly neighborhood. Other rapes were reported soon after, leaving many to wonder if the city is a safe place for women.

Maybe even more of a cause for concern is Sao Paulo, where crime’s not yet a thing of the past. Some 140 people were murdered in a span of two weeks last November. Prior to that, 144 were murdered in September. Many of those slain included police officers — more than 100 were killed in Sao Paulo in 2012.

The Brazilian government is trying to combat safety concerns by throwing money at the problem. In December, officials grabbed $900 million out of their infrastructure budget to put toward public safety. As for what they will do with the money, they have vowed to have one police officer for every 50 people attending the soccer matches, and one for every 80 people at large public viewing events. Would you go to the Super Bowl if it was in your city and your favorite team was playing in it? Well if you did, you would either be among the select few who can afford it, have a very good friend, or you’d be splurging.

Well the same may be true for Brazilians when the World Cup rolls into town.

Soccer has a religious devotion in Brazil, but ticket prices have already begun to rise along with the stadium revamps, threatening to tear some of the heart and soul from the matches.

World Cup ticket prices, which will be announced on July 1, are expected to be high.

The tournament will undoubtedly be a party atmosphere for tourists and wealthy locals. But it remains to be seen how many working-class fans will be afforded an opportunity to be included. Even Bacalhau, a die-hard Brazilian soccer fan who has only worn his team Santa Cruz’s colors for 38 years, told the UK’s Guardian newspaper that because of the anticipated ticket prices, he wouldn’t be attending and doesn’t know anyone who will be.

In fact, many have said they don’t plan on going anywhere near the festivities. Traffic in Brazilian cities can get so bad, sometimes people get pizza delivered to their car by motorcycle. It’s only expected to get worse once the tourists roll in.

The Brazilian national team leaves much to be desired Neymar looks on during the FIFA Confederations Cup Brazil 2013 match between Brazil and Japan at National Stadium on June 15, 2013 in Brasilia, Brazil. SCOTT HEAVEY Getty Images

Whether working-class locals participate or not, the team they’re supposed to root for may not be worth much cheering. As it stands currently, Brazil is 22nd in the FIFA rankings — a record low. Even Zico, a Brazilian soccer legend often referred to as “White Pele,” has said publicly that Brazil will not win the 2014 World Cup.

The good news: There’s still time before the tournament and so far, so good — Brazil beat Japan 3-0 in the opening match of the Confederations Cup on Saturday and topped Mexico 2-0 on Wednesday night.

The bad news: The team is young and untested. Even Neymar, who was called "the next Pele" by Time magazine, is only 21 and has never played in a World Cup match.