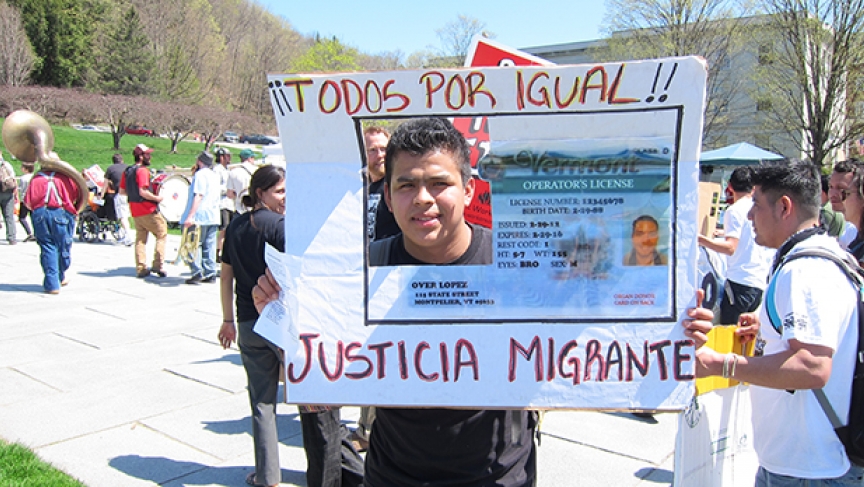 Alberto Madrigal, who is undocumented and from Mexico, protests for driver's licenses at the Vermont statehouse. (Photo: Sarah Harris)

Luis is a farmhand in East Montpelier, Vermont. He shows me around the dairy where he works. He explains where the feed goes, where the pregnant cows are kept.

Now, the farm is beautiful, but it's also pretty far from everything. The closest town is a 15-minute drive. There's no public transportation. For Luis, it's isolating. He's from Mexico, and is living here without legal permission. So, until just recently, he couldn't get a driver's license. He was stuck on the farm.

Luis, who requested that I only use his first name, says, "Put yourself in our position. We're working for people here, but we have no freedom."

Danilo López also knows this feeling. He's from Mexico, undocumented too, and once worked at a dairy farm here. One day, he had an awful run-in with a bull.

López tells me how the bull tossed him into the air. He landed hard, bruising his ribs. But his employer told him he couldn't take him to the hospital. He was too busy. And López was afraid to call an ambulance–and without a license, he couldn't drive himself in. It took a full day for López to get medical care.

Cases like this are triggering debates nationwide over whether immigrants here illegally should be allowed to drive. Arizona and Florida are among the states denying licenses, saying they encourage fraud.

But a growing number of states, including Colorado, Connecticut and Vermont, are approving laws that allow people, regardless of their status, to get licenses.

There are still restrictions. People with these special licenses and IDs can't board a plane or enter a federal building. But they can drive, get insured, and access basic services like food, health care, and banking.

Back in Vermont, Seth Gardner, who owns the farm and employs Luis, supports the new license law. "I almost think it boils down to a moral question," Gardner says. "When you have workers that show up on your doorstep, when all they have is a suitcase and they can't speak English, they're at your mercy. And that's not a good thing in some places and it lends itself to abuse."

Gardner continues: "I feel that the driver's license is a way to empower those workers, but it also sends a message, even though it's subtle, to the employer, that these people at least have that right."

But another dairy farmer in Vermont who requested anonymity says the issue isn't so simple. "Just the fact of saying that you're gonna have a license and your life is gonna change, the isolation is gonna disappear and so forth, that, I believe is very unfair–to be leading the young immigrant labor force into believing that just that license is going to change their life that way."

He feels federal immigration reform should lead the way, not state laws.

There are also questions about enforcement. State police aren't allowed to ask people about their immigration status. But in northern Vermont, where the US Border Patrol presence is strong, it's unclear if undocumented immigrants driving with one of the new licenses could risk deportation if they are pulled over.

For now, Luis, the farmhand, and his co-worker, Marcos, are not too worried about the risk. They plan to study for the road test and go in together to buy a used car. I ask where they might go once they own a vehicle.

For them, a license means not having to ask for help to go the grocery store or the hospital. It means, they say, feeling more free.

If you or someone you know is undocumented, we'd like to hear how a driver's license — or lack of one — affects your life. Share your story on Facebook or Twitter using the hashtag #globalnation.