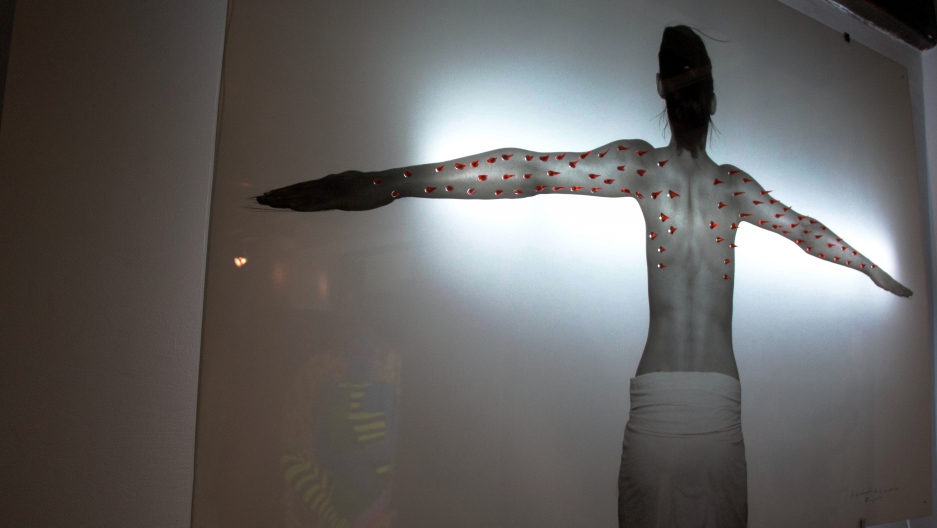 "Si te olvido tu te inventas" (If I forget you, you invent yourself), 2012, by Ernesto Rancano, on display at Galeria Villa Manuela in Havana, Cuba.
Credit: Carolyn Bick
Share

Editor's note: This article is part of a series by Boston University journalism students.

HAVANA, Cuba — In a tree-shaded neighborhood that was once home to wealthy Cubans, a stately sea-green mansion with tall Roman columns hides a trove of artistic surprises.

The Villa Manuela Gallery reveals the stunning vibrancy of Cuba’s contemporary art scene. In a country where people have struggled for decades with governmental restrictions on free expression, artists here exhibit a broader desire for a more open society.

Cuba has always maintained a venerable reputation in the international world of fine arts. For the best Cuban artists, the occupation is more than just a form of personal expression. Especially recently, as Cubans push to expand beyond their island’s shores, it can pave a path to what, by the country’s current standards, is considerable wealth.

While contemporary painters and sculptors sell to foreign tourists who pack the streets of Old Havana, they also show their work at chic galleries throughout Europe, South America and, more recently, the United States.

Some sell their works for tens of thousands of dollars.

The success that artists in Cuba enjoy reflects a striking difference between their place in society and the place artists occupy in other countries. Rather than suffer in garrets and work odd jobs, some are among the country’s highest earners, and enjoy privileges far beyond the means of most other Cubans.

These days, despite any previous governmental restriction that Cuba is infamous for, art experts say artists here are also able to paint, draw, and sculpt almost whatever they wish.

“There is more freedom in art than one would expect in Cuba,” said Michelle Wojcik, who runs a gallery in Boston’s trendy South End that showcases new art from Cuba. “That’s not to say that Cubans have total freedom, but the artists I have represented say they don’t feel restricted.”

The state-sponsored Villa Manuela Gallery in Havana, which opened in 2004, is on the cutting edge of contemporary Cuban art.

In March, it showed works interpreting the tensions felt by Cubans who live near the US military base at Guantanamo Bay. In April, its main gallery was painted black and dimly lit for a retrospective of delicate wooden sculptures by Inti Hernandez, who lives and works in both Havana and Amsterdam.

The contrast between the sleek minimalism of Hernandez’s show and the classical building in which it is housed reflects the desire of contemporary Cuban artists to combine their country’s rich artistic heritage with more modern tastes.

For much of the 19th century, Cuban art was strongly influenced by European classicism. Beginning in the 1920s, Cuban artists were drawn to more avant-garde forms. They joined restless artists in other parts of the world in what became known as the “Vanguard” movement, which rejected European-based academic conventions.

Perhaps the best-known of Cuba’s “Vanguard” artists, Wifredo Lam, worked in Paris with Picasso, Matisse, and Miro, and made a point of infusing his work with a distinctly Cuban spirit.

After Fidel Castro and his guerrilla comrades toppled US-backed dictator Fulgencio Batista in 1959, he laid out a utopian vision for the country that promoted and expanded access to education, science and culture.

Yet despite steps toward that vision, some scholars and self-exiled artists say artistic freedom was curtailed.

Critics of Castro say the island's art became too political, closely monitored by the National Union of Writers and Artists of Cuba, which was founded in 1961. The result was a great exodus of artists and intellectuals.

As the Soviet Union gained influence in the country throughout the 1960s and '70s, it tried to implement its own form of Soviet realism. Some native Cuban artists worked to reject this. In the 80s, they began to push harder for their freedom of expression, causing previous restrictions to loosen.

A decade later, artists were allowed to travel or emigrate, and the country lost a considerable amount of promising, up-and-coming talent.

Some artists, like Nelson Dominguez and Choco, are still promoted by the government, but they have been freed from pressure to use their talent to serve the state.

Contemporary Cuban art illustrates the country’s complexity. It is a rich mix of European, Caribbean and African heritage, Christianity and other religious customs, and a steadily increasing fascination with global culture.

“Cuba has always had a very rich tradition in art,” said Edel Bordon, whose vividly colored paintings convey a modern sensibility with distinctly Cuban accents. “Cuba’s art scene today is thriving and diverse, rooted in tradition but alive with innovation.”

Bordon is a prominent artist in Havana, and has shown his work in Brazil, Germany, Mexico, Switzerland and the United States. He also teaches in one of several important art academies that flourish here — and is himself an alum of those academies, with 13 years of academic training.

The revolution may have curtailed artistic freedom, but it also increased the opportunity for people to become artists by making extensive, subsidized art universities part of an unparalleled approach to the education of its citizens.

With Castro, arts education became accessible and reputable. The state has made arts education a priority, even in high school and primary school — something the government and its followers like to boast.

“Without artistic instruction, education is not truly integral,” a recent article in state newspaper Granma said.

Cuba’s most prestigious arts university, the Instituto Superior de Arte, was founded in 1961.

The fact that art education is free in Cuba “makes studying art attractive, and is therefore responsible for Havana’s strong community of artists,” Bordon said.

Yet he lamented that nearly all of his customers are foreigners.

“There is no tradition of buying art in Cuba,” he said. Most Cubans lack access to hard currency, and monthly salaries rarely exceed $30. As a result, most Cuban artists seek the international market.

Not until recently did that market include the United States, a country whose market particularly values free political expression and individuality in work.

“Art is a part of Cuban culture,” Wojcik, the Boston gallery’s director “Education in the arts is highly respected, and there is great regard for artists.”

Cuban art is hardly confined to sleek spaces like the Villa Manuela Gallery. Many painters make the streets of Havana their studio, delighting visitors who stop, watch, and sometimes buy. They add a bright flash of color to a city that — except for some restoration projects — has been slowly crumbling for half a century.

On a rainy afternoon recently, a self-taught painter named Favier Mesa worked on a still life inside a restaurant that caters to tourists.

“There are a lot of artists and galleries here, a strong community, so it’s not too hard to become an artist here,” he said. “I paint what I want. I paint because I like it.”

This spring, Boston University journalism and photography students made a weeklong trip to Cuba. By special arrangement, GlobalPost is presenting six stories that emerged from their trip. The introductory piece is by Stephen Kinzer, the former New York Times foreign correspondent who was the students' journalism professor. The five that follow were written by his students. Photos were taken by students working under the guidance of prize-winning photographer Essdras Suarez.