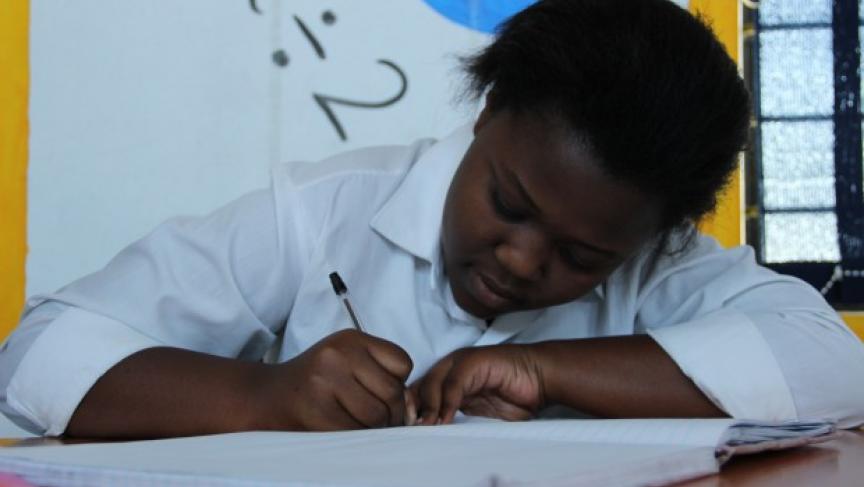 A student at the Centre of Science and Technology (COSAT) completes a math assignment.

But now more and more universities require an aptitude test. It’s called the National Benchmark Test, or NBT. Think of it as South Africa’s equivalent of America’s SAT.

The cost of the test is relatively low – equivalent to about twenty US dollars. But for thousands of students in South Africa’s low-income urban townships, that cost can be virtually insurmountable.

Yesterday, I bumped into Tandie, a COSAT twelfth-grader. She was sitting in the school library, checking her university applications online. She said her two top schools – the University of Cape Town and Stellenbosch University – both require the NBT. She barely managed to pull together the money for the test.

“I went door to door in my community asking people to help,” she said.

Tandie stays in an informal settlement, and nearly everyone around her lives in a shack. She said it wasn’t easy to get people to cough up the cash. She eventually found three people who were willing to help, and their contributions got her exactly the amount she needed.

I asked how many people she had to solicit to find those three.

In the US, the College Board (the organization that administers the SAT) offers fee waivers to low-income students. Some after-school programs also pick up the tab for especially needy learners. But in South Africa, few – if any – programs of this sort exist.

That begs the question: are South African universities doing a disservice to the country’s poorest students? Is the NBT a barrier to higher education?

Tandie seems to think so. A friend of hers, who attends a struggling public school, wasn’t able to come up with the cash in time and couldn’t apply to some of her top schools.

And Tandie was so excited to have raised the money for the exam that she forgot about another expense – transportation. She needed about two dollars to get to the testing center. The morning of the exam, she scrambled to find help, and eventually borrowed money from a neighbor. She almost missed the test.

“That’s just the way of the world,” she said. “Survival of the fittest.”