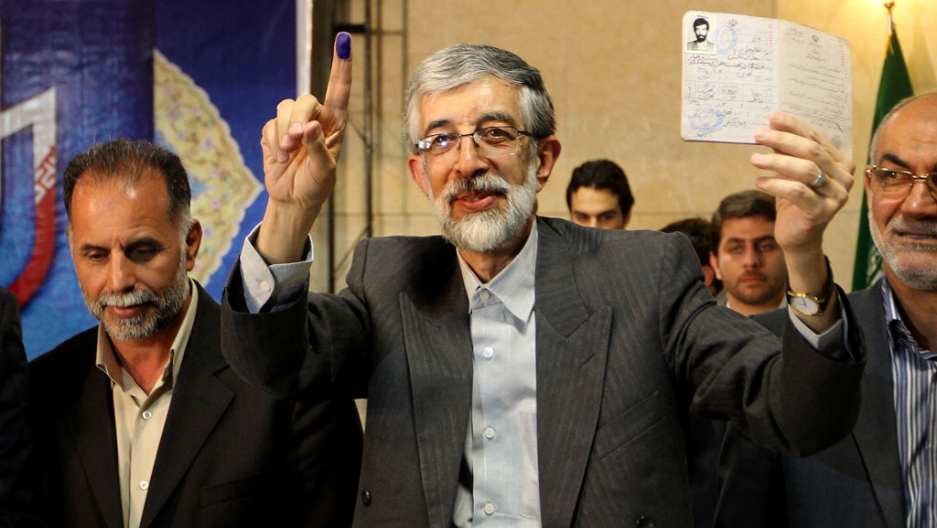 Iranian former parliament speaker Gholam Ali Haddad Adel holds up his ID after registering his candidacy for the upcoming presidential election at the interior ministry in Tehran on May 10, 2013. He withdrew his candidacy on June 10.
Credit: ATTA KENARE
Share

"With my withdrawal I ask the dear people to strictly observe the criteria of the Supreme Leader of the Revolution [Ayatollah Ali Khamenei] when they vote for candidates."

He did not provide any further information about why he withdrew, nor did he throw his weight behind another candidate.

His statement, which Reuters said was carried by Iran's semi-official Mehr news agency, did have a message for voters, however:

"I advise the dear people to take a correct decision so that either a Principlist wins in the first round, or if the election runs to a second round, the competition be between two Principlists."

More from GlobalPost: Over 20 feared dead in Iraq market bombings

The Principlist movement in Iran is characterized by its conservative sympathies and criticism of current President Mahmoud Ahmadinejad's perceived "deviationist current," according to the United States' Institute of Peace's Iran Primer.

It is also decidedly pro-Islamic. A 2011 declaration authored by Association of Combatant Clerics and the Association of the Seminary Teachers of Qom constitutes the group's "manifesto," said the Iran Primer, commenting:

"But this document has little to say on bread-and-butter issues such as job creation, economic development or even foreign policy. It focuses instead on broad conservative principles: loyalty to Islam and the revolution, obedience to the supreme leader and devotion to the principle of velayat-e faqih, or rule by an Islamic jurist."

Iran's tight-fisted authorities closely scrutinize the candidates running for president in the nation's theocratic republic; the supervising Guardians Council approved just eight candidates out of the nearly 700 who tried to run.

The outcome of Iran's last presidential election, held in 2009, resulted in mass riots as the opposition disputed the election results.

The protests were the largest seen in Iran since the 1979 revolt which swept the theocratic authorities in to power, but the newly-assertive opposition movement was quickly subjected to a brutal government crackdown.

Here's a video report on the move by Haddad Adel from Al Jazeera: