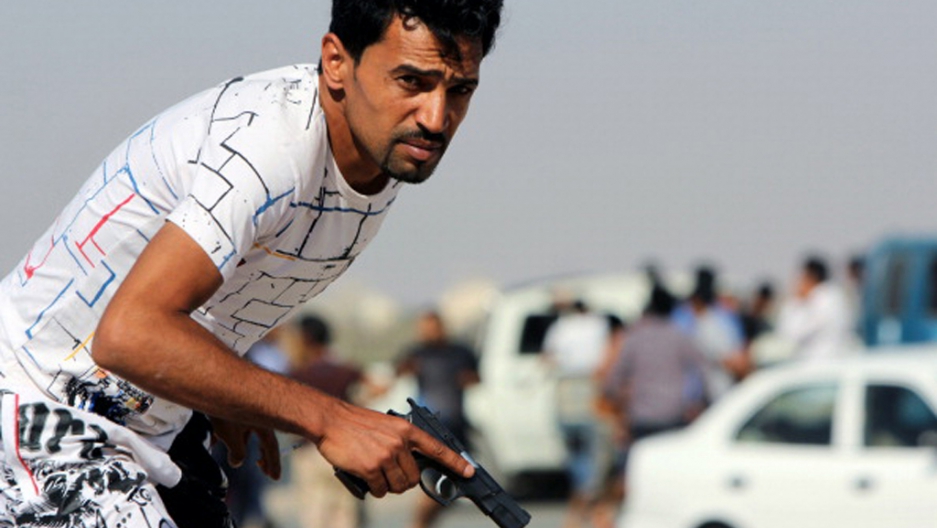 A Libyan protester holds a gun during clashes between demonstrators and troops of the Libyan Shield Forces, a coalition of militias, following a demonstration outside the LSF office in Benghazi on June 8, 2013.
Credit: AFP
Share

After 31 deaths this weekend further proved Libya isn’t moving fast enough to establish a national security force, General Yusef al-Mangoush announced he was quitting as chief of the military.

The violence happened Saturday in Benghazi outside a “Shield of Libya” compound. Demonstrators surrounded the militia base and said they wanted militias disbanded and government forces to take control.

A similar demonstration elsewhere in Libya on Saturday ended without violence.

The gunmen opened fire and threw explosives at the buildings, and Shield of Libya returned fire. It’s unclear what or who initiated the battle.

The government must form a plan to disband “all illegitimate armed groups … including by use of force” and integrate them into the regular army.

That plan must be implemented by 2014, according to AFP. Libya continues to play a dangerous game with its militias.

The Shield of Libya, or Libyan Shield, was instrumental in overthrowing dictator Muammar Gaddafi; it continued to operate under defense ministry control.

Libya’s post-Gaddafi authorities, still unable to form a professional new army and police corps, have called on the Shield to intervene in various tribal conflicts that trouble the country, AFP said.

An estimated 100 people were wounded during the fighting this weekend, and BBC reported six amputations among the dead.

Adel Tarhuni, who speaks for the Shield of Libya, told the Guardian newspaper that his group had no choice.

“We had to defend ourselves,” he said, according to the Guardian.

The militia then left their compound and government troops moved in at the barracks.

Many in Libya and abroad blame Mangoush for failing to consolidate and organize the national security forces after Gaddafi’s death.

More from GlobalPost: Inside Gaddafi’s Libya