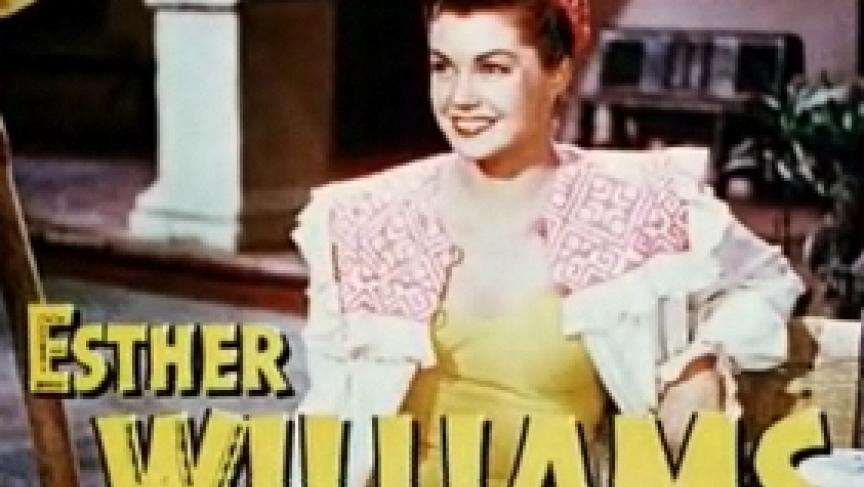 Esther Williams as Maria from the trailer for the 1947 film 'Fiesta' (Photo: screenshot from WikiCommons)

Share
Hollywood icon Esther Williams died Thursday at the age of 91. The movie star was a former Los Angeles Athletic Club champion swimmer. She's remembered for her impressive aquatic feats in major MGM extravaganzas of the 1940s and 50s. Her most famous films were marvels of Technicolor escapism, known as Aqua-musicals. They featured sophisticated synchronized swimming scenes, some may say grand, or over the top. Her films' evocative titles include "Bathing Beauty," "Million Dollar Mermaid" (her favorite), "Neptune's Daughter," and "Jupiter's Darling." The announcer in the trailer of that film says it all. "Gorgeous Esther Williams in the most spectacular underwater extravaganza ever filmed, the girl with the heavenly body who can even make a statue come to life." Williams acted entire scenes under water, always dove in with properly extended toes, always rose from the water with a perfect smile. Williams was a quintessential California girl, but her movies popularized top-notch synchronized swimming around the world, and her influence is still felt today. Adele Carlsen was the high-performance manager for Britain's synchronized swim team in the Beijing and London Olympics. She says she pretty much grew up in the shadow of Esther Williams' cinematic achievements. "My dad really liked Esther Williams, she says, "I think that's why I became a synchronized swimmer. He actually saw her perform in a water show in Wembley after she retired from doing films. And he liked all the MGM musicals so I grew up watching them." In competition, Carlson's synchronized swimmers don't take the kinds of risks that Williams embraced in her career. Williams performed arduous acrobatic tricks, diving from a towering platform wearing a golden crown, for example, or jumping from a swinging trapeze high above water, always gracefully. And that too, suggested Carlsen another career choice. "She actually inspired me to set up a company called Aquabatix where we perform for events," she says, "and we actually get a lot of requests in to perform like Esther Williams in the 1950s, in the glamorous style of synchronized swimming." Esther Williams passed away at the age of 91, but her shimmering glamor lives on.