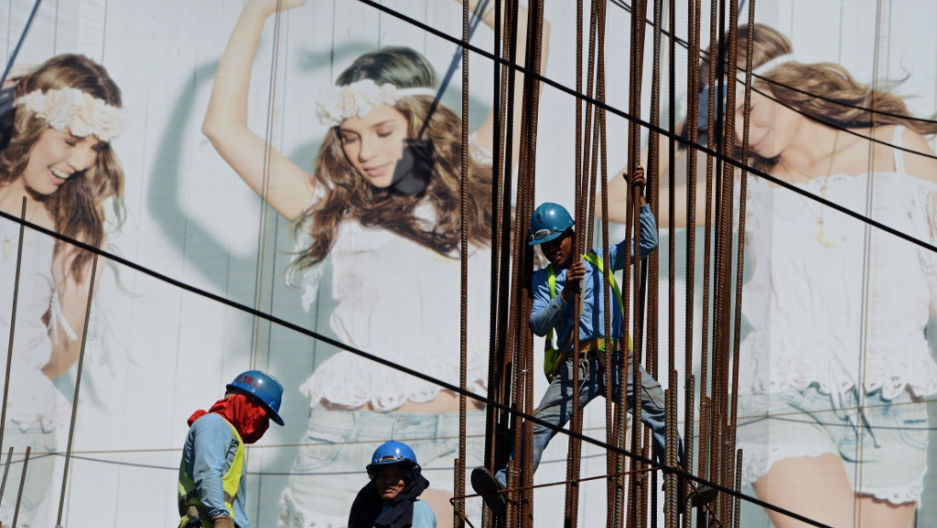 Workers check the steel reinforcement bars at a construction site in Manila on May 29, 2013. Across the country, more than 850,000 square metres (9.1 million square feet) of office space and 14,000 residential units were reported to enter the market in 2012.
Credit: Noel Celis
Share

Among those dealing cards, mixing martinis and preparing meals for guests are about 500 of Solaire’s 5,000 workers who used to punch the clock overseas.

Amid an economic boom in the Philippines, however, they've resettled here.

President Benigno Aquino acknowledged their symbolic importance during Solaire’s opening in March. “They were not forced to come home,” he said. “They decided that working and living in the Philippines is better than working abroad.”

Long known as an economic laggard whose chief export was job seekers unable to find work at home, the Philippines is now Asia’s rising star.

The country’s 6.6 percent economic growth rate in 2012 was the second-highest in Asia behind China. The stock market expanded by 30 percent during the same period. In April, the Philippines received investment grade status from two of the big three credit ratings firms, Fitch Ratings and Standard & Poor’s, for the first time in the country’s history.

Among other growth, the Philippines has become a major destination for call centers and business-process outsourcing. As local consumption rises, legions of shopping malls have also gone up, including two of the world’s largest.

To help keep the momentum going, the Aquino government is investing heavily in highway and other infrastructure projects through partnerships with the private sector and is negotiating with Muslim rebels to bring peace to the volatile but resource-rich southern island of Mindanao.

“Back when everyone was talking about the Asian tigers, the Philippines was the region’s stray cat,” said Neil Ruiz, an associate fellow at the Brookings Institution. “But now the country is catching up.”

It’s been a long time in coming.

The English-speaking archipelago of more than 7,000 islands was expected to become a regional economic powerhouse in the 1960s and '70s under US-backed dictator Ferdinand Marcos. That promise enticed the Asian Development Bank to set up headquarters in Manila.

But while countries such as South Korea used their governments' levers to promote manufacturing and other industries, Marcos proved more adept at fomenting crony capitalism. He ignored calls for land reform in a nation where agriculture is a key sector and enabled prominent families close to the regime to control much of the country's wealth.

“Ours was a country that other Asian leaders viewed with a mixture of condescension and pity,” columnist Elfren Sicango Cruz wrote in the Manila newspaper Business World.

More from GlobalPost: Church takes on reproductive rights in the Philippines

Marcos was ousted in 1986 and replaced by Cory Aquino, the current president’s mother. But the first Aquino administration and a succession of democratically elected governments were plagued by political instability and corruption scandals.

All along, the Philippines churned out high school and college graduates who couldn’t find work at home. Because they spoke English and were relatively well-educated, millions found jobs abroad, especially in the oil-rich Middle East. They even inspired an acronym, OFW, for overseas Filipino worker.

OFWs have been a double-edged sword. They've represented brain drain as the best and brightest left the Philippines in an exodus that took the pressure off politicians, allowing them to avoid making vital political and economic reforms.

But OFWs also sent home money that helped stabilize the economy during the 1998 Asian economic crisis and again during the 2008 global recession. Last year, remittances from between 4 and 5 million OFWs totaled $21 billion, equal to about 17 percent of the country’s gross domestic product.

“That’s why OFWs have been called the country’s new heroes,” said Marjorie Pajaron, a research fellow at Stanford University who focuses on the impact of OFWs and remittances.

But as new venues like Solaire spring up, some OFWs are coming home. Analysts say that the improved business climate is partly due to President Aquino, who since his election in 2010 has cracked down on government corruption that had driven up the cost of doing business.

“Aquino has gone after the big fish,” Pajaron said. “That has produced a lot of confidence among both foreign and Filipino investors.”

The Philippines is also home to a youthful population with a median age of 23. Unlike Japan and China, where aging populations are a growing burden on government safety nets, young Filipinos represent rising consumption, a solid labor pool and increased opportunities for investors.

But for all of the positive indicators, critics claim that several years of strong economic growth have done little to improve the lot for average Filipinos. Unemployment stands at about 7 percent, one of the highest rates in the region. The country’s poverty rate of 28 percent has hardly budged over the past decade.

Then there’s the issue of inequality. Economist Cielito Habito says that three-quarters of the country’s overall increase in income last year went to the 40 richest Filipino families.

“We have an oligarchic economy where the bulk of the nation’s wealth and income is in the hands of a few,” Habito wrote.

“It certainly will not happen overnight,” she told reporters. But "we have three more years to keep pushing on that front because everyone wants to see those [poverty] numbers go down.”