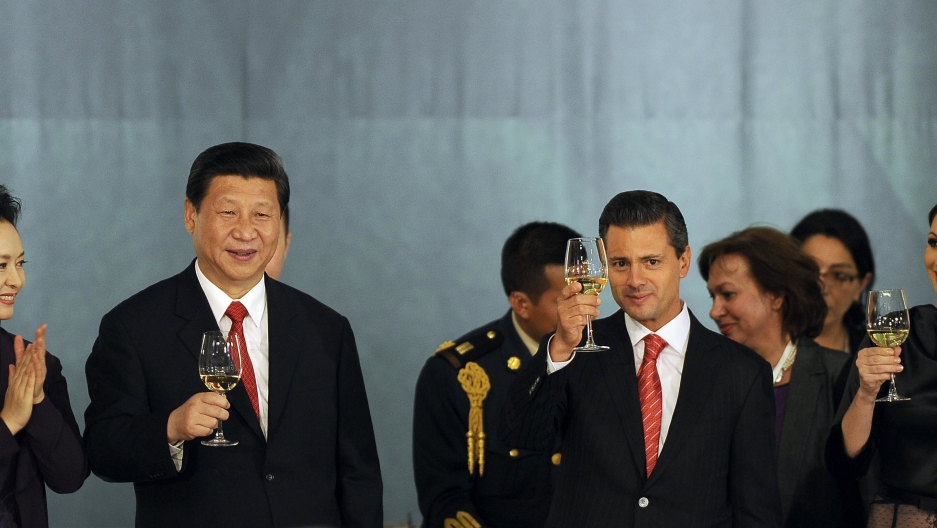 MEXICO CITY, Mexico — As Mexican business executives and President Enrique Peña Nieto host Chinese leader Xi Jinping for two days of meals, meetings and sightseeing, they might do well to keep an eye on their plates.

Because China has been eating Mexico's enchilada for more than a decade.

China's craving for commodities played a key role in the export-driven economic boom that's swept oil, mineral and grain-rich South America in the past dozen years.

But the relationship has been far less beneficial to Mexico, which serves more as a market for Chinese factories than a source of their raw materials.

He meets Friday with US President Barack Obama in southern California.

Chinese leaders “want to repeat, emphasize, underscore that their interests in Latin America are economic, not political,” said Lynne Walker, director of the China-Americas Program at La Jolla, California's Institute of the Americas.

“These are very interesting times, particularly for China and Mexico,” Walker added.

On his visit now, coming just seven weeks after meeting with Peña Nieto in China, Xi might be looking for more of Mexico's 1.5 million barrels of daily oil exports, most of which now goes to the US refineries, analysts say.

"China has become a source of economic growth and a factor of international stability," Peña Nieto said in a welcoming ceremony for Xi this afternoon. "Mexico wants to tighten its relationship."

China-Mexico trade rocketed from about $3 billion in 2001, when Beijing signed on to the World Trade Organization, to nearly $63 billion last year. But so far China has claimed the tiger's share of that expanding pie.

Mexican consumers gobbled up $57 billion worth of Chinese electronics, toys and assorted geegaws last year, while businesses here sold barely a 10th that sum in minerals and farm produce, tacos and tequila to China.

A poll Tuesday in the Mexico City newspaper Reforma reported nearly three-quarters of Mexican business executives and analysts view China as a competitor rather than a partner.

That fear is helping fuel opposition to a massive permanent trade show — the Dragon Mart — proposed for the Cancun area, where goods could be ordered from hundreds of showrooms for direct delivery from China.

“The Mexican private sector doesn't want to hear of it because the Chinese are tough competitors,” said Manuel Molano of the Mexican Institute for Competitiveness, which pushes for market-focused economic reforms.

At the same time, Mexican companies have been wary of doing business in China, he said, because “it's not our natural market. There are very few Mexicans who understand it.”

Chinese and Mexican factories, either owned or closely tied to US and other foreign companies, compete directly for the American consumer. US trade with Mexico, at about $500 billion last year, is only slightly less than that with China. But China sells stuff to the United States worth three times more than what it buys from it. Mexico runs a surplus with the United States as well, but a far smaller one.

After bleeding jobs to China for years, Mexico's industrial north has begun winning them back with low wages, much cheaper shipping costs and greater legal guarantees under the North American Free Trade Agreement, analysts say.

“Mexico comes up pretty high on the list for any company producing or the North American market,” said Christopher Wilson, an expert on Mexico's border economy at the Woodrow Wilson Center, a think tank in Washington, DC. “Mexican manufacturing has seen a resurgence in competitiveness in recent years.”

While China's famously rock bottom industrial wages have quadrupled in a decade, Mexico's factory workers have seen their paychecks increase by less than 3 percent a year. Today, China's factory wages average $2.40 an hour, only slightly trailing those of Mexico's.