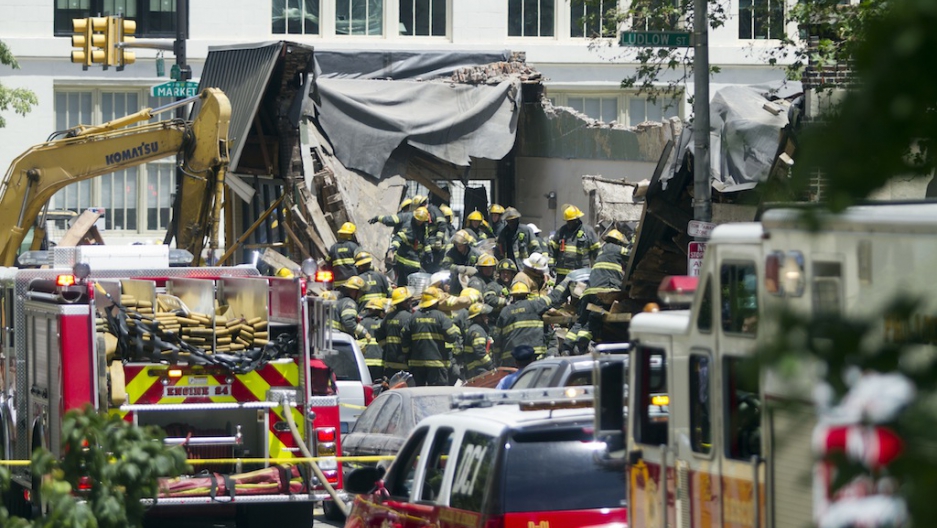 Rescue workers search for victims and clear debris from a building that collapsed in an apparent accident at a demolition site, at 22nd and Market Streets, June 5, 2013 in Philadelphia, Pennsylvania. The building being demolished landed on top of a Salvation Army Thrift Store, destroying most of it and reportedly trapping and injuring over a dozen people.
Credit: Jessica Kourkounis
Share

As many as 10 people were believed to be trapped and at least five injured after a building collapsed in Philadelphia on Wednesday morning.

The Associated Press is now reporting that 12 people have been rescued from the building rubble, and two others are still trapped.

The four-story building, located at the corner of 22nd and Market streets and connected to a Salvation Army Thrift Store on the southeast corner, collapsed at 10:45 a.m.

The collapse took down part of the thrift store and what was thought to be converted row homes attached to the back of the building.

Fire Commissioner Lloyd Ayers said search and rescue teams are working to find those trapped under the rubble.

Photos of the rescuers working at the scene are being tweeted by those in the vicinity.

At least four search dogs are on the scene and the first hour of the search was "hands only," as firefighters moved bricks with buckets in order to find survivors.

News choppers and other reporters have been moved away from the scene so that rescuers can hear anyone trapped under the rubble calling for help.

Two victims have been taken to Hahnemann University Hospital and three others were brought to the Hospital of the University of Pennsylvania. All five victims are said to be adults, and the extent of their injuries has not been released.

There was no word on exactly what caused the building to collapse, but there have been reports that some demolition work was occurring next to the thrift store.