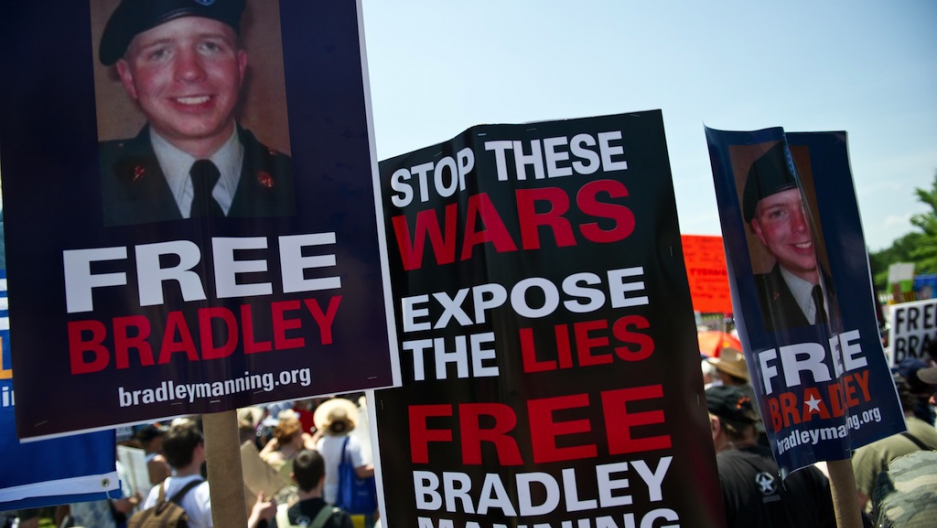 People gather on June 1, 2013 during a demonstration in support of Wikileaks whistleblower US Army Private Bradley Manning at Fort Meade in Maryland, where Manning's court martial began on June 3.
Credit: NICHOLAS KAMM
Share

Army Pfc. Bradley Manning used his military training to publish hundreds of thousands of classified documents that he knew would endanger fellow US soldiers, an Army prosecutor said on the first day of the high profile court-martial.

Manning, 25, was first arrested in Iraq three years ago on charges that he sent the classified material to the online anti-secrecy website WikiLeaks.

Manning pleaded guilty in February to 10 charges relating to the leaked documents that carry a 20 year prison sentence.

The US military and the Obama administration are now seeking a greater charge of aiding the enemy, which could carry a life sentence.

Manning admitted to sending the materials to WikiLeaks but maintains he did not believe the information would harm the US and his fellow soldiers.

The defense is expected to make a statement later Monday saying that Manning wanted to start a debate on the role of the military and foreign policy and show the “true cost of war.”

The materials that Manning admitted to leaking to WikiLeaks included diplomatic cables, war logs from Iraq and Afghanistan and video footage of a 2007 US helicopter attack that killed civilians Baghdad, reports the Baltimore Sun.

WikiLeaks has never confirmed nor denied Manning’s involvement in the leaked documents.

The information "has great value to our adversaries and in particular our enemies," Army prosecutor Capt. Joe Morrow said during the government's opening argument at Fort Meade.

"This, your honor, this is a case about a soldier who systematically harvested hundreds of thousands of documents from classified databases and then dumped that information on to the Internet into the hands of the enemy," Morrow said.

The Obama administration has said the more than 700,000 leaked documents put the US at risk and threatened valuable military and diplomatic sources and strained America's relations abroad.

Manning drew the attention of human rights groups when he went public about the treatment he said he received while being held in a Marine Corps brig in Quantico, Va.

In a pre-trial hearing, a military judge ruled that Manning’s treatment at the brig was "more rigorous than necessary."

The soldier was kept in a windowless cell for 23 hours a day, often without clothing.

Military officials said it was to keep Manning, whom they considered a suicide risk, from harming himself.

An earlier ruling declared that Manning will have about four months shaved off any potential prison sentence to compensate for his treatment at Quantico.

On Monday, about 20 Manning supporters gathered outside the visitor gate at Fort Meade in the rain with signs reading “free Bradley Manning" and "protect the truth" while chanting "What do want? Free Bradley. When do we want it? Now."

The trial is expected to last through the summer.