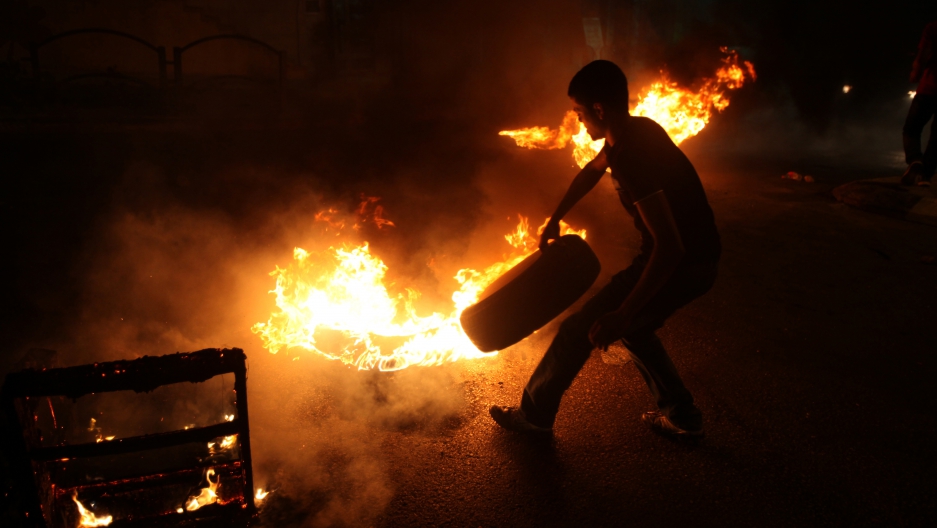 A Palestinian youth burns tires during a protest against the high cost of living at Al-Amari refugee camp near the West Bank city of Ramallah on September 8, 2012.
Credit: Abbas Momani
Share

RAMALLAH, West Bank – On a recent drive through this city at the heart of the Palestinian Authority, I was in shock to see all the shiny, towering office buildings, the new apartment blocks and store fronts. There was a vibrant nightlife with cafes and discos. On the surface, it looked like things were better these days in the West Bank.

It was my first time back since 2004 and I had a chance to connect with my long-time colleague Said Ghazali, a great Palestinian journalist who I was lucky enough to work with for many years at The Boston Globe when I was based in Jerusalem. Ghazali quickly dissuaded me of the idea that things were better.

“It only looks that way, but it is really just as bad as ever. And in some ways it is worse. The walls make it worse,” said Ghazali, referring to the towering walls erected in recent years by the Israeli military to cut off the Palestinians living in the West Bank from Israel and the Jewish settlements built in defiance of international law.

As I spoke to more and more old Palestinian friends, shopkeepers and taxi drivers, I realized that the same grim despair was still there. It has pervaded Palestinian life ever since the peace process collapsed and, in many ways, was lingering there even before it collapsed. The despair turned to anger and then the eruption of further violence in the second Palestinian ‘intifada,’ or uprising, which I covered from its beginning in 2000. Now it has solidified into despondence or perhaps bitterness.

From the veneer of Ramallah’s current prosperity (perhaps illusion is a more accurate term) created largely by Western donor countries to the almost cliché image of poverty in the ramshackle Palestinian refugee camps, there was deep suspicion about US Secretary of State John Kerry’s $4 billion offer of economic aid. As Ghazali informed me, it is being largely seen as a bribe to give up on Palestinian nationalist aspirations. In this guest post from Ghazali, he paints a vivid picture of just how cynical the Palestinians are about the grand gesture made by Kerry. — Charles M. Sennott

AMARI REFUGEE CAMP, West Bank — Amid a pile of broken and rusted bicycles, Abed Abu Qwaik was at work repairing one of the bikes as he looked out at the sprawling, trash-strewn warrens of the refugee camp.

It all seemed worlds away from US Secretary of State John Kerry's new vision of a bountiful West Bank.

While Kerry spoke last Sunday of pumping $4 billion in investment into the West Bank to buttress peace efforts, Abu Qwaik spoke in an interview with GlobalPost of his own economic reality and his family’s relentless financial crisis.

He said two of his children are married and have children of their own and they are in the same dire straights.

''They are poor. They are sick. They are unemployed,'' he added.

Unemployment is more than 80 percent in this camp, which offers squalid accommodations to 8,000 people who are refugees from Israel's establishment in 1948 and their descendants. They live mostly in decaying homes spread over 22.5 acres.

Kerry told the World Economic Forum in Jordan last Sunday that unemployment could rapidly be reduced by two thirds if his investments to encourage a peace initiative gains traction.

But after 20 years of failed self-rule and continued de facto Israeli occupation that have only made Palestinians worse off, Kerry will have his work cut out to win the confidence of Palestinians. And as always there is not much confidence among Palestinians in their own leaders even if they do take his offer.

In interviews, Abu Qwaik and many others in the camp criticized the Palestinian self-rule authority for what they said were its injustice, patronage practices and corruption. They are also critical of the United Nations Relief and Works Agency (UNWRA), mandated to assist refugees, for cutting back its services in the camp.

To show their anger with the Palestinian Authority, which provides only 70 jobs to camp residents, Amari camp leaders have removed President Mahmoud Abbas's huge photo at the camp entrance and replaced it with a picture of Yasser Arafat, the founding father of Palestinian nationalism who died in November 2004.

Residents say the closure of the main crossing point between Ramallah and Jerusalem by Israel is the chief reason for their woeful economic state.

''The Qalandia crossing is the gate of our prison,'' said Walid Hammad, a 58-year-old former designer, now unemployed. ''It prevents us from selling our agricultural produce, eggs and meat. It strangles our economy. It is a rope around our necks.''

Just a few hundred meters away from the camp are the well-paved roads of Masyoon Heights, which is only a 10-minute drive from the center of Ramallah and about 18 miles from Israel’s Ben-Gurion International Airport.

At the World Economic Forum in Jordan, Kerry set out a $4 billion economic plan that could, he said, bring unprecedented wealth and stability. The economic advance would spread across the region and help galvanize diplomatic efforts and buttress resumed peace talks between Israel and the PA, he said.

Kerry referred to a ''groundbreaking plan to develop a healthy, sustainable, private sector-led Palestinian economy that will transform the fortunes of a future Palestinian state.''

But even here where that kind of investment could help fuel growth at the companies located in the shiny new office buildings, Kerry’s plan is met with skepticism and outright suspicion. Most people here say they feel the Palestinians are being lured with more money from Western donors to delay their search for independence and a state of their own.

The plan was almost immediately depicted by Palestinian analysts as a kind of bribe to give up their nationalist aspirations. It evoked a moderately worded objection from Abbas's economic adviser, Mohammed Mustafa.

''The Palestinian leadership will not offer political concessions in exchange for economic benefits,” Mustafa said Monday in a statement reported by the Palestinian Ma'an news agency.

He added that political issues must remain the focus of peacemaking, saying, ''We will not accept that the economy is the primary and sole component.''

Mustafa, who is also head of the Palestine Investment Fund, said that the political priorities are creation of a Palestinian state based on the borders set after the 1967 Six Day War with East Jerusalem as its capital and ensuring the rights of refugees. But he also stressed that investors are more than welcome to ''come to Palestine.''

On the surface it seems that the economy could certainly use a boost. Unemployment in the West Bank has reached 23 percent. The deficit in the PA's budget for 2013 is more than $1 billion. Hidden unemployment is rampant among the Palestinian Authority’s 170,000 employees.

Economic growth could be more than 14 percent but in fact has fluctuated between 5.6 to 6.5 percent in the last two years, according to Abdullah al-Shaarawi, manager of investment and development for the publicly traded company PADICO.

He said growth is mainly linked with the size of the donor countries’ contributions as well as the Israeli economic restrictions and halt of revenues.

Abdul-Sattar Qassem, a professor of political science at an-Najah University in Nablus who is sharply critical of the PA, believes its leadership will implement Kerry's plan.

“The US and Israel are telling us: if you don't do what we say, you will starve. The PA can't say no to America and Israel because it is financed by donor contributions,” said Qassem

He said it was common for Palestinian officials to advance Israeli interests, adding, “Most people talk about consumption values and not production values. The Palestinians talk about freezing the construction of settlements, nonetheless Palestinian workers build them. The PA officials are only interested in getting their VIP cards and accumulating their wealth.”

At the offices of PADICO, Hiba Darwish, the head of public relations, also objected to Kerry's plan. “It is a trap that we should not fall into,” she said. “The first step must be ending the occupation and then we can talk about boosting the Palestinian economy.”

Still, Darwish welcomed the possibility of building an airport in Jericho, which is believed is part of Kerry’s plan.

“It's my life dream to set off from a Palestinian airport. But I'm not sure this is going to happen,” she said.

Munib al-Masri, a Palestinian billionaire who has launched an initiative with Israeli high tech guru Yossi Vardi to break the Palestinian-Israeli deadlock stressed that Kerry's plan is not a substitute for negotiations but rather a complement. He said there would be no joint ventures with Israelis before the ending of occupation.

Al-Masri said, ''I don't want to discuss any economic perspective with them, all I can say is that Kerry's plan would not be implemented before the start of negotiation between Israel and the Palestinians.''

Back in Amari, the sense is that things are not going to change, at least not according to Abu Qwaik, still tinkering on a bicycle.

“We are waiting for…” he stopped, searching for a word. “We have no other options.”