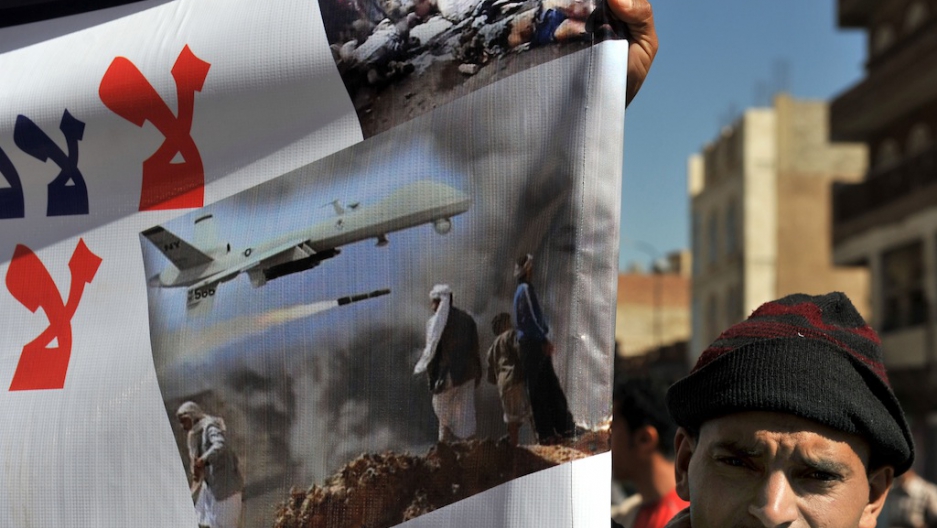 A man protests against US drone attacks in Yemen near thee home of Yemeni President Abdrabuh Mansur Hadi, in the capital Sanaa, on Jan. 28, 2013.
Credit: STR
Share

Hours after two drone strikes reportedly killed seven insurgents in Yemen, where the US believes Al Qaeda is dangerously active, the group issued a statement "to the American nation" asking the country to "leave us with our religion, land and nations and mind your own internal affairs," according to the Associated Press.

The US releases little information about its drone activity, but such attacks have increased dramatically under US President Barack Obama's leadership. The US leader recently addressed the controversial policy in a major speech, saying such strikes could only be justified by a “continuing and imminent" threat to national security.

In Yemen, a security official said the drone strikes hit Saturday in the nation's militant-strong south. The US is hoping such strikes cripple the activity of Al Qaeda in Yemen, seen as one of the group's most extreme branches.

The group's leader there, Qassim al-Rimi, issued a six-minute English-subtitled message to the American nation hours after the drone strikes, reported the Associated Press. It was not immediately clear if the two incidents were related.

Al-Rimi said US "security is not achieved by despoiling other nations' security or by attacking and oppressing them," pointing to the bombings that shook Boston in April as well as poison-laced letters sent to various US leaders as evidence that "control of your security has broken away," reported AP, citing audio available on the al-Malahem Foundation website.

But bombs almost went off in Yemen on Sunday — a local security official told AP authorities there put a stop to a planned car bomb attack in Sanaa earlier in the day.

Also Sunday, Yemini leaders said they are planning to repatriate the Yemini prisoners held at the US detention center at Guantanamo Bay now that the US has granted them permission to do so, reported Reuters.

"Obama now has to really put his words into actions," Foreign Minister Abubakr al-Qirbi told journalists in Jeddah on Sunday, saying the government is building a detention center to hold the 56 Yemini prisoners suspected of terror activity currently in US custody on unclear legal grounds, said Reuters.

The repatriation newly permitted by Obama "brings hope to families of the detainees in Guantanamo and to the detainees themselves who for 12 years have been in prison and have lost hope of getting out of Guantanamo," al-Qirbi added, according to Reuters.

Obama has promised to close the prison at Guantanamo, but has not been able to do so.