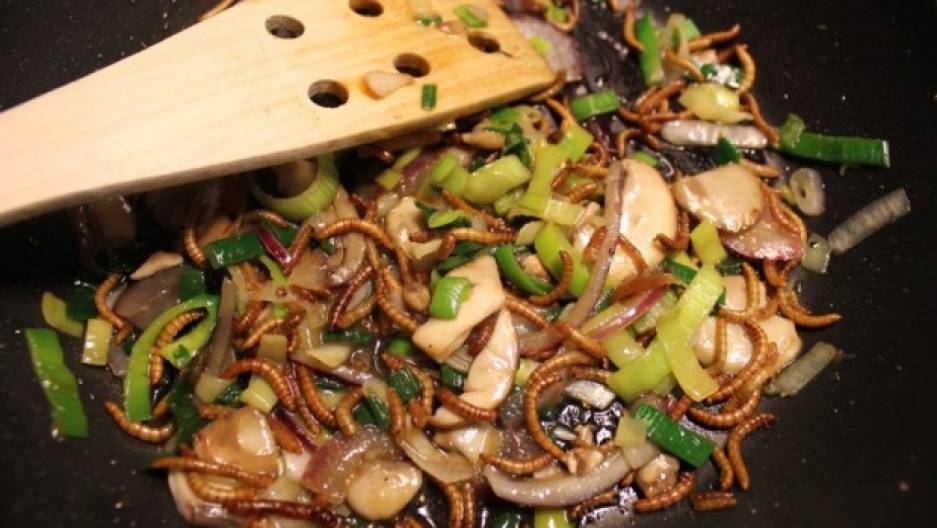 These larvae of mealworm beetles feed on grain and carrots and convert their food into protien much more efficiently than livestock. (Photo: Jon Miller/Homelands Productions.)

Demand for animal protein is surging, and so are the environmental costs of producing it. So researchers in the Netherlands are exploring alternatives to livestock, from insects to faux cuts of beef to lab-grown meat. Reporter Jon Miller traveled there for the final part of our "What's for Lunch" series.

Stop number one on my “alt meat” tour was the cafeteria of Maastricht University medical school, in the southern Netherlands, where I met Mark Post, head of the physiology department. He usually takes a cheese sandwich to work, but today he opted for a hamburger.

Post is an expert on how human heart tissue grows and heals. But lately he’s been thinking a lot about burgers.

A good hamburger, he said, “should taste like meat, and not like something that looks and sort of could be meat.”

To Post, most hamburgers are in that “sort-of-could-be meat” category. That’s one reason it’s taken him five years to produce one that’s good enough to serve in public.

Produce it in his laboratory, that is.

At this point it’s also expensive and inefficient. And it relies on large quantities of growth medium derived from slaughtered animals, which kind of defeats the purpose. But with the enormous impact that livestock have on the environment, Post thinks the stakes are too high not to try to get it right.

“If we can come up with a very efficient way of producing a product that is indistinguishable from the real thing, and that has a guaranteed quality, I think there will be a huge demand for it,” Post said.

Finding that way will cost money. To attract funding, Post knows he needs to prove that the whole no-cow meat idea has legs. He promised to cook and eat a lab-grown burger in public last fall. But he missed his deadline. Now the event is scheduled for August 5th. When I met him, he was nervous.

“We could set this field back 10 or 20 years if we fail to come across to the public and to the media as a credible alternative for meat production,“ he said.

Three hours north of Maastricht, another Dutch scientist showed me his idea of the meat of the future – not in a laboratory but in a humid walk-in climate chamber stacked floor to ceiling with boxes of crickets.

“Insects,” entomologist Marcel Dicke said, “turn out to be an excellent alternative.”

Dicke says insect meat and cow meat are virtually the same when it comes to nutrition. But to produce a pound of beef you need about 20 pounds of feed. For insects, it’s less than two pounds.

“So with the same amount of feed you can produce much, much more in terms of proteins,” he said. “But not in this crazy way in which we're producing regular meat now, with all the burden for our planet.”

The hurdle, of course, is the gross-out factor. Dicke likes his bugs straight up, the way folks do in Asia and Africa and Latin America. But Europeans and Americans tend to prefer them less conspicuous. So he’s looking at disguising them by pounding them into flour, or mixing them into processed meat.

It seems to work. In a taste test at Wageningen University, where Dicke teaches, students rated meatballs made with 30 percent mealworms higher than ones made with 100 percent beef.

The night after my meeting with Dicke, I had dinner with my friends Martin and Nynke. My house gift was a little tub of mealworms I picked up at a local health food shop. Nynke proposed to add them to a stir-fry. And I proposed that she not incorporate them in a way that would make it impossible to eat the dish without the mealworms.

She obliged, making two separate dishes, one with mealworms and the other with cashews.

The mealworms were golden brown, just under an inch long, thinner than spaghetti. When they were ready – very quickly, as it turned out – we opened a crisp white wine from Italy.

I ate them, but have to admit that I didn’t enjoy them – they were like little fat packets. But I could definitely see how they’d mix well with other stuff. And I’ve been assured that locusts and crickets are delicious.

The last stop on my alt meat tour was, of all places, a butcher shop in The Hague, about an hour’s train ride to the west of Wageningen. It had pretty much everything you’d expect – white tiles, big refrigerators, blackboards advertising beef and pork and chicken and fish.

“We just built the old-fashioned butcher store, and the only difference is that there are no animals involved,” explained Niko Koffeman, co-owner of the Vegetarian Butcher.

The company uses cutting-edge food science technology to make disconcertingly realistic fake meat out of wheat and beans and other plants. It’s been a big success since it opened two years ago. The products are in hundreds of outlets now, and the company is looking to franchise in other countries.

I tried the faux chicken satay and spicy tuna salad. And, of course, a hamburger. Koffeman said it had one-eighth the environmental impact of a McDonalds burger.

I haven’t eaten real beef since I was a teenager, but it seemed pretty authentic to me. Koffeman says it’s the taste of the future.

“It's very old-fashioned to put plant-based proteins into an animal, to lose 90 percent of the nutritional value, and just to keep 10 percent of it,” he said. “If you would like to feed the world, we can feed 30 billion people, if we feed them plant-based. So that’s the solution.”

The Netherlands is far ahead of most countries in planning for climate change. That may be because two-thirds of the population lives below sea level.

But when it comes to meat alternatives, there could be other reasons, too. Vegetarian butcher Niko Koffeman was recently elected to the Dutch Senate as the first-ever representative of what bills itself as the fastest growing party in the country – the Party for the Animals.