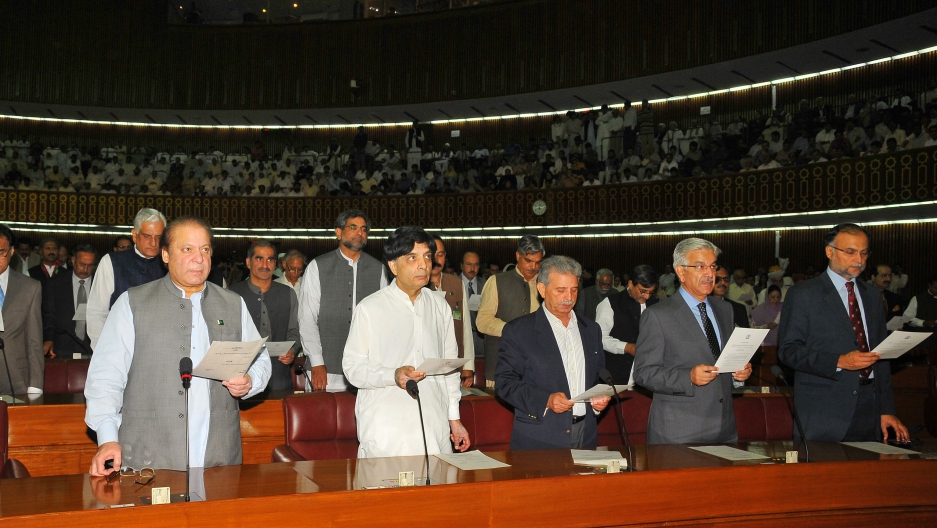 Pakistani Premier-elect Nawaz Sharif (L, first row) takes the oath along with other lawmakers at Parliament House in Islamabad on June 1, 2013. Pakistan's new National Assembly was sworn in on June 1, completing the country's first-ever democratic transition of power in a country ruled for half its history by the military.
Credit: Stringer
Share

Pakistan swore in newly-elected members of its National Assembly on Saturday, capping the country's first-ever democratic transition of power.

Outgoing Speaker of Parliament Fehmida Mirza solemnly administered the oath to lawmakers in a ceremony broadcast live on television, The Associated Press reported.

Mohammad Nawaz Sharif, expected to be sworn in as prime minister next week, "thanked God" a change of power in Pakistan had taken place through voting.

"I pray...changes in the future also occur in similar manner. Government comes and goes through votes," he told reporters outside the assembly building.

An election for speaker and deputy speaker is set for Monday.

His Pakistan Muslim League won 186 seats in the 342-member assembly in last month's election and will form a majority government next week.

Lawmakers face steep challenges in the form of widespread energy shortages, a struggling economy that may need an international bailout to be revived and ongoing fighting by the Taliban and other militant extremists.

Sharif hopes to resolve differences with the Pakistani Taliban through peace talks.