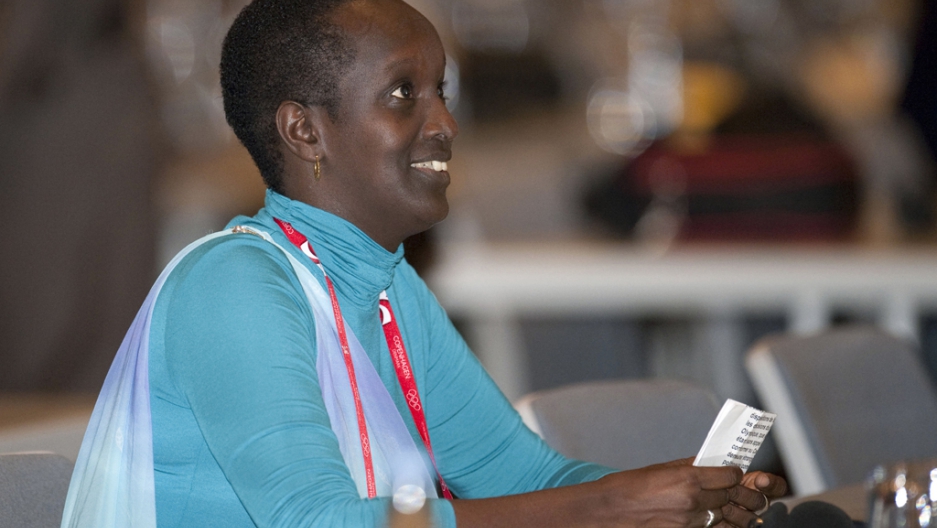 Lydia Nsekera. president of the Burundi Football Federation, reacts October 9, 2009, in Copenhagen after she was elected as a new member of the IOC.
Credit: JENS NØRGAARD LARSEN
Share

Lydia Nsekera became the first woman elected to the FIFA executive after winning a vote on Friday in Mauritius.

The 46-year-old head of the Burundi Football Association outlasted Australia’s Moya Dodd and Sonia Bien-Aime, of Turks and Caicos.

“I will inspire women to believe they can lead and I will support women in member associations,” Nsekera said, according to BBC.

The FIFA executive board contains 24 members from across the world headed by president Sepp Blatter.

FIFA co-opted Nsekera into the executive committee last year, also a first. She has led the Burundi FA for about nine years and helped organize the soccer tournaments at the 2008 and 2012 Olympics. She’s also an IOC member.

Her appointment, however, wasn’t without detractors.

“I am not sure it was based on credentials, more on image and perception. Everyone is pandering to the African vote,” a senior FIFA delegate said.

Another added: “Moya Dodd, who is a practicing lawyer, would have been a far better choice, especially with the continuing reform process FIFA has implemented, but Nsekera was personally chosen by president Blatter last year and the status quo has been maintained for obvious reasons.”

Dodd is also a former player for the Aussie national team who now heads up the national soccer federation Down Under.

She will now join the executive committee, and said she cherished the opportunity as a woman and the first Australian on the board.

“I commit myself to putting the interests of football first, strengthening its governance and promoting further development of inclusion in football, especially for women,” Dodd said in a prepared release.

“I would like to acknowledge the strong support of my confederation the AFC, who had the faith to nominate me for a female position in the first place.”