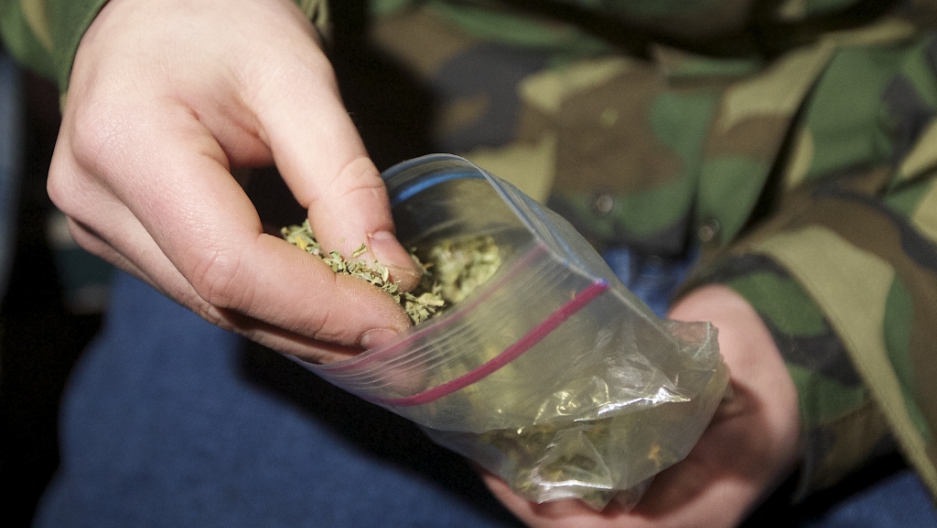 A Seattle resident takes marijuana from a plastic bag shortly after a law legalizing the recreational use of marijuana took effect on Dec. 6, 2012 in Seattle.
Credit: Stephen Brashear
Share

LIMA, Peru — Scoring some pot could be as easy as ordering your next venti frappuccino (no whip) if an ex-Microsoft exec has his way.

Jamen Shively, a former corporate strategy manager for the software giant, is seeking $10 million in capital to create the United States' first national cannibis brand — a "Starbucks of marijuana," if you will, according to The Seattle Times.

"We're going to mint more millionaires than Microsoft with this business," he said before a news conference in Seattle on Thursday.

Shively, 45, announced plans to buy medicinal marijuana dispensaries in three states and wants to set up a chain of branded locales that would sell the drug for both medicinal and recreational purposes.

Joining him was former Mexican President Vicente Fox, a longtime acquaintance who is on record as wanting to explore alternatives to the "war on drugs."

"What a difference it makes to have Jamen here, sitting next to me, instead of Chapo Guzman," Fox was reported as telling the press conference.

Fox is one of a number of past and current Latin American leaders who, to varying degrees, want to see an international debate about the possibility of legalizing, or at least decriminalizing, different narcotics that are currently illegal.

In his case, he has publicly stated that even cocaine should be allowed, arguing that authorities should manage its impacts as a public health issue rather than one of law and order.

Juan Manuel Santos, the current president of Colombia, and Otto Perez Molina, his counterpart in Guatemala, have both also called for a rethink while in office. Many Latin American nations no longer penalize possession of small amounts of cannabis intended for personal use.

Meanwhile, in Uruguay, a new scheme will see the state actually supplying cannabis in an attempt to break the link between the soft drug and the trade in more dangerous substances.

While the sale and possession of marijuana is illegal in the United States under federal law, Colorado and Washington have passed laws legalizing it and are among 18 states that allow cannibis for medical use.

The US Justice Department had no comment on Shively's plans.