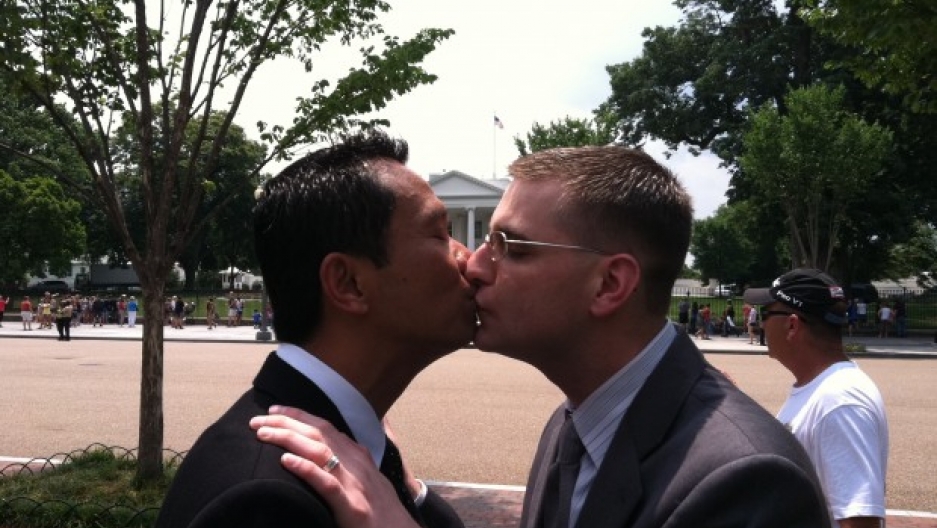 Anton Tanumihardja and Brian Andersens wedding day photograph, taken June 12, 2011, in front of the White House. Tanumihardja is from Indonesia and hopes that an upcoming Supreme Court ruling will allow Andersen to sponsor him for a green card. (Photo: C

In the US, the push is on to recognize gay marriage across the country. It's an especially crucial issue for gay US citizen spouses who cannot get a green card for their foreign-born partner. A break might come from the Supreme Court, which will rule soon on two gay marriage cases. WHYY reporter Emma Jacobs met one couple in Philadelphia facing these issues head-on.

Anton Tanumihardja and Brian Andersen already know what might happen this summer. There was a dress rehearsal two years ago, not long after the two men started dating in Philadelphia. Things were good until Tanumihardja, from Indonesia, revealed his secret: He showed Andersen a letter ordering him out of the US--deported--by February 14 of 2011, Valentine's Day. At the time, it was just 10 days away.

Tanumihardja told Andersen, "If you want me to stay here, I'm going to fighting for our love."

And fight they did.

"It was kind of a defining point of our relationship," says Andersen. "We want to fight for what we have. We want to be together. What are we gonna do?"

I met the couple at an Indonesian restaurant in Philadelphia. It's also where they had their first date.

They told me that to fight Tanumihardja's deportation, there were late nights of letter writing and filling out paperwork. Tanumihardja half-joked about the stress of it all. It was like trying to survive a reality TV show contest, he said. And it seemed he had lost when his departure date arrived. Tanumihardja was on his way to the airport--to go back to Indonesia--when his lawyer called. His deportation was halted, for now.

The couple sees two possible solutions. One is through immigration reform and, that Congress will approve letting same-sex couples petition for legal status for their spouse.

But that is not likely. Robert Gittleson, head of Conservatives for Comprehensive Immigration Reform, says adding a provision for gay couples is a deal breaker.

"For us, it would be extremely unfortunate," Gittleson said. "We really want to have immigration reform. I mean, for me, this is my life, my most important issue. But while I understand there's going to be a lot of disappointment in the LGBT community and I have sympathy for that, there are other ways that they can get what they want."

What's that other possibility? In June, the Supreme Court is expected to rule on the challenge to the 1996 Defense of Marriage Act, also known as DOMA. It's a federal law defining marriage as solely between a man and a woman.

The Philadelphia couple has mixed expectations.

"I'm optimistic about it," Andersen said.

But Tanumihardja isn't and also knows that, beyond his relationship, his identity is at stake. He left Indonesia in part because, he says, it is tough to be gay there. Indeed, in some Indonesian provinces, it is illegal to be gay. There have been violent attacks against gay men.

As Tanumihardja talks, he rested his hand on Andersen's arm, something he wouldn't do back home.

In the US, Tanumihardja has felt so comfortable about his relationship with Andersen that he allowed CNN to report a story about them and his fight to stay. But Tanumihardja did not realize that Indonesian newspapers would pick up that story and that his sexuality, long hidden from his family back home, would be widely known.

Today, deportation back to Indonesia hangs over Tanumihardja.

"Sometimes it's mess, my life, because I can not concentrate one thing," he said.

To relax, the couple tries to make the most of their time together, like that night at the Indonesian restaurant. They are regulars and usually stick around after all the other patrons have left.

"It's like this is our memory place," said Tanumihardja.

If they're granted a future in the US, there is no doubt they will make more memories here.