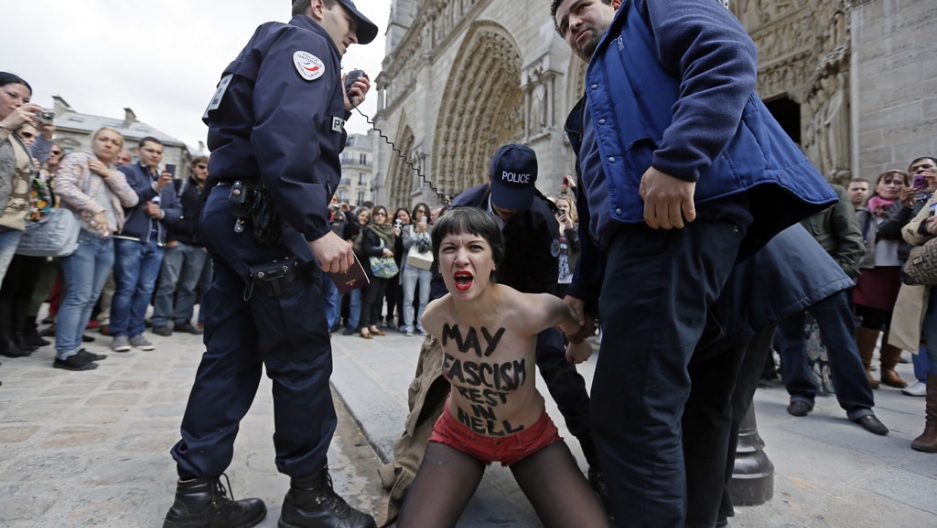 A member of Femen, with "May fascists rest in hell" on her chest, is arrested by police officers after she took part in a protest inside the Notre Dame Cathedral in Paris on May 22, 2013.
Credit: KENZO TRIBOUILLARD
Share

The trial of Femen activist Amina Tyler started on Thursday in the Tunisian city of Kairouan.

The 18-year-old feminist was charged with carrying an "incendiary object" after she was caught by police earlier this month with a can of pepper spray. At Thursday's hearing, the judge presiding over Tyler's case also announced that she would face new charges of indecency and desecrating a cemetery.

Tyler, whose real last name is Sboui, appeared in court smiling and dressed in a white robe.

The young activist scandalized her country in March by posting photos online of herself topless with the slogan "my body is my own" written on her torso. Ukrainian group Femen, of which Tyler is a prominent member, is famous for its topless protests.

She had to go into hiding after receiving death threats, but reemerged May 19 in Kairouan, where she wrote "Femen" on a cemetery wall near the city's main mosque.

Around 200 protesters, many religious conservatives, protested outside the court on Thursday, chanting slogans against Tyler and accusing her of attacking the city and insulting Islam. They also shouted insults at defense lawyers, accusing them of "sullying" the image of Kairouan.

Three other Femen members held a topless protest the day before Tyler's trial started. Wearing only shorts, they chanted "Free Amina" and "A women's spring is coming."

Tyler's father, Mounir Sboui, was also present in court on Thursday to support his daughter.

"I am proud of my daughter who has honored the rights of women," Mounir Sboui told the Associated Press. "Maybe her acts were rash, but this is her way of expressing these ideas."