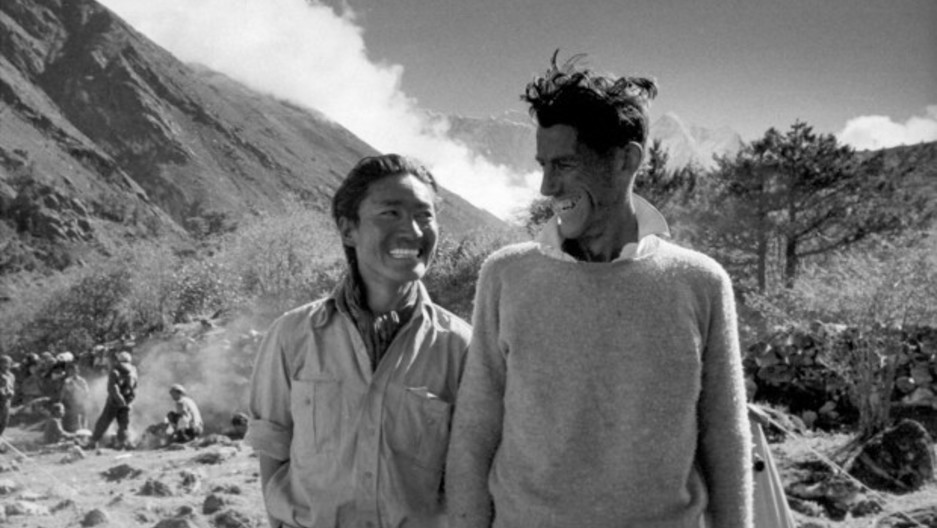 Sir Edmund Hillary (R) and Sherpa Tenzing Norgay smile during their first interview with Reuters special correspondent Peter Jackson after their legendary ascent of Mount Everest (summit to the right of Hillary's head) at camp in Thyangboche, Nepal in this file photo taken June 6, 1953. As Sir Edmund Hillary marked 50 years on Thursday since he and Sherpa Tenzing Norgay completed the first ascent of Mount Everest, the world's television viewers could watch events live from Nepal. Half a century earlier, getting the news out from the "Roof of the World" was a rather different affair, as Reuters correspondent Peter Jackson recalls in his account of his historic scoop -- the first interview with Hillary and Tenzing following their conquest of Earth's highest peak. REUTERS/Peter Jackson BEST QUALITY AVAILABLE - RTR1IO5O

Share
Sixty years ago New Zealander Edmund Hillary and Sherpa Tenzing Norgay made it to the top of the world. They reached the summit of Mount Everest – some 29,000 feet up – at 11:30 in the morning on May 29th, 1953. They came down the mountain heroes though Hillary spoke about their feat modestly. In an interview with his brother Rex, he described the last big obstacle he overcame on his way to the top. "I was a bit worried about it at first but fortunately there was a crack between the ice and the rock," Hillary told his brother, "I got into this and I was able to wiggle my way up it." Sir Edmund Hillary died in 2008 at the age of 88. Tenzing Norgay was 71 when he passed away back in 1986. That crack is now called the Hillary Step. Hillary placed a cross at the peak to commemorate the moment while Norgay left an offering of chocolates in the snow. While Hillary claimed that he and Norgay reached the summit together, Norgay claimed Hillary was up there first. However it happened, the men remained lifelong friends. Hillary spoke about Norgay in this 1974 Smithsonian recording archived by the Library of Congress. He also spoke about another expedition he took to the Himalayas in which he researched the storied rumor of the abominable snowman.