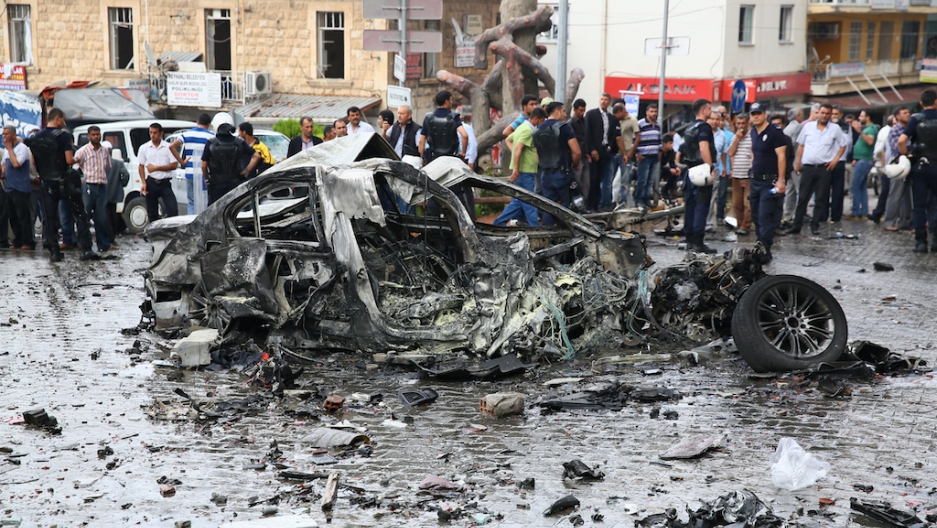 A crowd gathers around the wreckage of a car bomb in the central shopping district of the Turkish town of Reyhanli. Two car bombs killed at least 40 people and wounded more than 100 in Reyhanli on the Syrian border on Saturday. The bombs, which exploded in downtown Reyhanli, including outside the local municipal building, raised fears that Syria's ongoing civil war is spilling over its borders.
Credit: Tracey Shelton
Share

REYHANLI, Turkey — With bombs in its cities, refugees on its borders, and Syrian rebels operating from its soil, Turkey is on the verge of entering into a full-scale conflict with its war-wracked neighbor.

But by taking on the regime of Syria’s Bashar al Assad — a brutal dictator with Russian backing and a core of staunch supporters inside Syria — Turkey threatens to further ignite the regional conflagrations already kindled by the country’s destabilizing and widening civil war.

More aggressive intervention into the Syria conflict — in which more than 80,000 people have been killed since 2011, human rights groups and the United Nations say — could put Turkey into near-direct conflict with Iran, a regional power and stalwart ally of the Syrian government.

It could also roil Turkey as it negotiates a fragile peace deal with Kurdish fighters now withdrawing to northern Iraq as part of the accords after 30 years fighting the Turkish state. The fighters, who belong to the Turkey-based Kurdistan Workers Party (PKK), wield considerable influence on the sizeable Kurdish community inside Syria.

Turkish intervention could threaten the relative self-autonomy Syrian Kurds have forged since the uprising, prompting a backlash against Turkey on both sides of the border.

All of these things “risk straining Turkey's economy, accentuating its sectarian and political divisions, and compromising its overall stability," a January report from the Washington Institute for Near East Policy (WINEP) says.

Turkey is also embroiled in the war in broader strategic terms, the report says.

With the border areas serving as a smuggling, logistics and operational hub for Syria’s disparate rebel groups, as well as a home for 350,000 refugees, Turkey has indeed long been involved in the conflict that began as a popular uprising in 2011. But it quickly morphed into a full-scale armed civil war.

In what was the first major incident of tension between the two sides, Syria shot down a Turkish reconnaissance jet off the Syrian coast — but that Turkey maintained was in international airspace — in June 2012. Turkey then called for an emergency session of NATO’s North Atlantic Council, the defense alliance to which it belongs, but no military action was taken.

In February, a car bomb exploded at the Turkey-Syria border crossing at Bab al Hawa, killing 14 and that Turkey blamed on the Assad government. Mostly errant artillery shells from Syria have also landed in Turkey numerous times.

In a deadly attack earlier this month, at least two car bombs exploded in the Turkish border town of Reyhanli, in Hatay province, killing 56.

Authorities here said a Turkish, pro-Assad Marxist group was responsible for the attack, which left entire blocks of shops and homes in ruins.

Distraught locals looked on from behind police lines in disbelief, as rescue teams searched through smoldering buildings sand overturned cars for survivors.

But Turkey’s options for retaliation or even intervention remain limited, particularly without the political and perhaps military backing of the Obama administration.

While Prime Minister Recep Tayyip Erdogan and US President Barack Obama agree that Assad should go, they appear to disagree on how vigorously that goal should be pursued.

Erdogan has long called for the establishment of a no-fly zone to halt air attacks on rebel-held areas inside Syria. Obama reportedly requested plans for a no-fly zone from the Pentagon, the Daily Beast reported Tuesday.

But largely, the administration has been reluctant to commit US troops or air support to yet another bloody conflict in the Middle East.

The United States stepped up its "nonlethal" support for the Syrian opposition, including body armor and night vision goggles. But the rise of extremists, including some linked to Al Qaeda, within rebel ranks is worrying policymakers in Washington — and Turkey can’t guarantee that weapons it gives to the opposition won’t end up in the hands of PKK militants.

“I believe the government will reduce their support [of the Syrian opposition] in the aftermath of the Reyhanli bombings,” Turkish political analyst and author, Kenan Camurcu, told GlobalPost.

Indeed, perhaps the biggest challenge to Turkey intervening in Syria will come from within.

In a survey released earlier this month by Pew Research Center, a public opinion group, 65 percent of Turkish citizens oppose Turkey supplying arm to the rebels, and more than half were concerned the violence would spill over into Turkey.

More from GlobalPost: Turkish military fired back after Syrian shell lands in its Hatay province

The Turkish demonstrators mounting ongoing protests against the fresh violence say Syria’s rebels are directly involved in the attacks they say will drag Turkey into the war on the opposition side.

Others simply blame the presence of anti-Assad fighters inside Turkey for provoking regime-sponsored attacks.

The Reyhanli attack happened “to create chaos in Turkey, to carry the war over here, and to spark the hatred between the same races that are fighting in Syria,” activist and protest organizer Ferit Diker said at a protest in Samandag, Turkey last week.

The other protestors chanted anti-government slogans, and carried signs criticizing Erdogan’s rulng Justice and Development Party (AKP). “The day will come, AKP, when you will have to account for our actions,” read one placard.

But Turkey is already suffering the effects of their limited involvement in Syria, including an economic strain.

In November, exports from Hatay to Syria had fallen to less than half their 2010 level, according to WINEP. Turkey had exported iron, steel and crude oil to its Arab neighbor. But now, key exports — mostly via smuggled routes — are food supplies, cement and an illegal weapons trade.

In addition, the refugee crisis is costing the Turkish state roughly $40 million each month, according to figures announced by Turkish deputy prime minister, Ali Babacan, in January.

There is “no magic formula for dealing with an extraordinarily violent and difficult situation like Syria’s,” Obama said at his joint press conference with Erdogan at the White House on May 16.

But analyst Camurcu says Erdogan must come up with one soon.

“The people don’t want war,” he said. “They want their government to find a peaceful solution.”