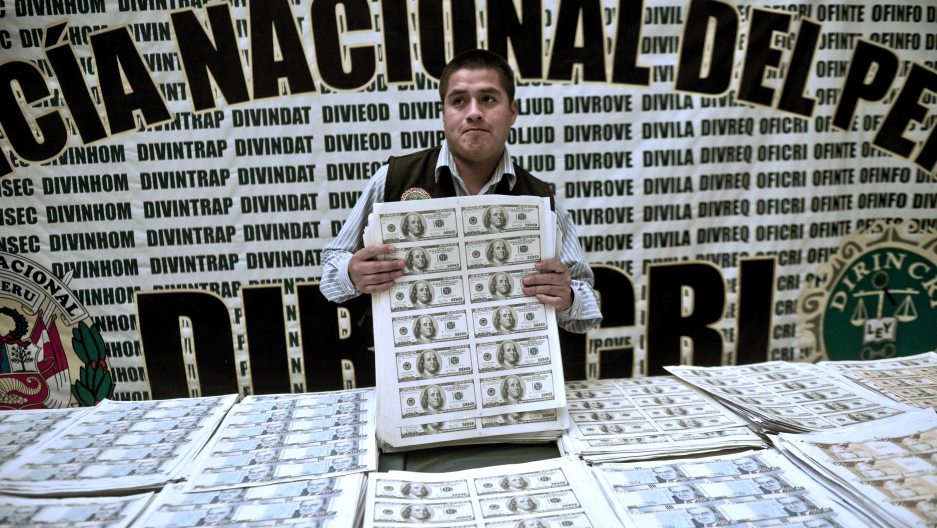 If you are thinking cocaine, then think again.

This South American country is now thought to be the world’s top producer of counterfeit greenbacks. Some 17 percent of the false bills circulating in the United States come from Peru, one US law enforcement official told GlobalPost.

Peruvian crooks aren't just churning out vast numbers of phony $20, $50 and $100 bills: They are also making much higher quality fakes than the false dollars produced within the US.

One of the reasons is technology. The counterfeiting gangs here use offset printers rather than photocopiers. But Peru is also home to some of the world’s most skilled counterfeiters, who employ painstaking, traditional techniques to give their bills apparent authenticity.

“They are specialists in giving it the tonality, texture, the watermark. Each of these bills goes through a rigorous process,” says Col. Segundo Portocarrero, head of the Peruvian police’s anti-fraud unit.

As he talks, Portocarrero illustrates how the gangs use a needle to pierce the bills and pull through a fake metal security thread, an extremely delicate, time-consuming task that only the steadiest, most skilled hands can pull off.

Laid out on his desk in front of him are sheets of uncut $100, 50 euro and 100 Peruvian sol bills, as well as the transparent film used in the printing process, with columns of Benjamin Franklin’s unmistakable gaze outlined on the plastic.

“An organization that has someone who knows how to print will not limit themselves to just US dollars. They will also fake other currencies,” says Special Agent Ed Lowery, who has been heading up the US Secret Service’s collaboration with Peruvian law enforcement on the issue.

Since the start of 2010, police here have arrested 296 people in connection with producing fake money and broken up seven different counterfeiting gangs.

Just two percent of the fake dollars produced in Peru remain here. In the US, the fake dollars are often laundered by using them to buy gift cards, effectively converting them into a new legitimate form of currency.

But there are also markets for the bogus cash in Latin America.

The dollar is used as an alternative currency in many countries in the region. Fed up with its long history of financial crises, Ecuador even gave up its own currency, in 2000, and now only uses dollars.

Meanwhile, the booming black markets in countries such as Argentina and Venezuela, both with foreign exchange controls and troubled economies, are perfect destinations: recipients are unable to deposit their money in local banks, where the phony bills would instantly be detected.

A Peruvian policeman is reflected in a photolith used to print sheets of $100 counterfeit bills. Ernesto Benavides/AFP/Getty Images

So, how did Peru rise to the top of the ranks of counterfeit currency producers?

According to Lowery, there is no great mystery, given that neighboring Colombia previously held that title.

“The heat was on in Colombia, so they just packed up shop and moved to Peru,” he told GlobalPost.

Last November, the Secret Service, which was originally created in 1865 to tackle rampant counterfeiting within the US, opened up an office in Lima to work closely with Peruvian law enforcement in tackling the problem.

Details of the office’s activities, or even how many special agents are based there, are confidential.

But Lowery, who is full of praise for the efforts of the Peruvian police, now expects a wave of successful operations in Peru to follow from the $24 million of fake dollars, along with a total of nearly $23 million in counterfeit euros and sols, seized in 2012 here.

Despite the similar trafficking methods — and the huge coincidence that Peru and Colombia occupy the top two spots for the production of both cocaine and fake dollars — neither Portocarrero nor Lowery are linking the two industries.

The Peruvian police colonel describes drug trafficking and counterfeiting cash as “complementary activities” but largely carried out by distinct groups. His US colleague adds of a possible connection between the trades: “We have no proof of that.”

Fake bills currently account for less than 0.01 percent of the cash circulating in the US and approximately 0.5 percent in Peru. But if you are unlucky enough to be passed one, it hurts, with banks and stores obliged by law to confiscate fake bills on detection and notify the authorities.

“The victims are often the most vulnerable, the poor or the elderly, who don’t use banks and don’t know how to check a bill’s authenticity,” Portocarrero says.

Yet most Peruvian fake dollars still have one fatal flaw — they are printed on poor quality paper that, unlike real dollars, falls apart when dipped in water for a few seconds.

But if that's not sufficient, the Secret Service also offers its own online tutorial, Know Your Money, explaining how to spot fake bills.