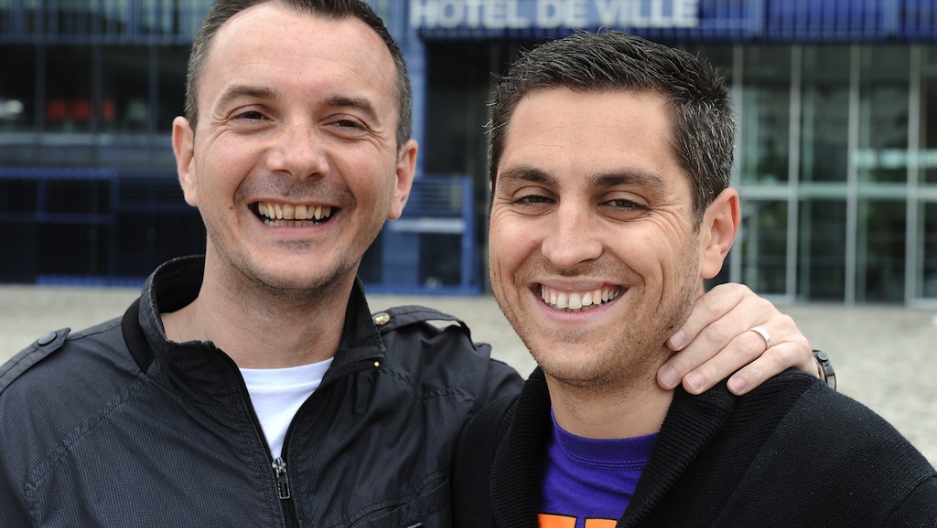 Vincent Autin (L) and his partner Bruno pose for a photograph on May 18, 2013 in front of the city hall of Montpellier, France.
Credit: Pascal Guyot
Share

The socialist mayor of Montpellier, Helene Mandroux, will on Wednesday, May 29, on the steps of city hall, marry France's first gay couple.

Vincent Autin, 40, and his partner Bruno Boileau, 30, will tie the knot after months of passionate debate and large protests, especially in Paris, for and against France becoming the 14th country to legalize same-sex marriage on May 18.

"It could be intimidating," Boileau said, speaking about the likely media circus that will surround the couple. "But we will try to retain the spirit of the goal -- equality for all. That Mister or Miss Anybody can get married in the town hall."

On Sunday, an estimated 150,000 people rallied in Paris to protest the law - supported by President Francois Hollande - that gave gay men and women the right to marry. France is technically a secular state, but it has a very vocal Catholic population that has opposed the law, as recent weeks have shown.

Some protesters condemn the law for religious reasons, while some conservatives say that while they support equal rights for gay couples, they do not think that includes the right to marry. Others have protested against allowing gay married couples the right to adopt and raise children.

Also Sunday, a lesbian love story by Abdellatif Kechiche won Cannes film festival's top honor, the Palme d'Or, with the event's director calling on those protesting in Paris to watch the movie.

"Everyone who is against same-sex marriage or love between two people of the same sex must see [Blue is the Warmest Color]," he told Reuters.

Here's a short video, via Agence France-Presse, of Autin and Bruno.