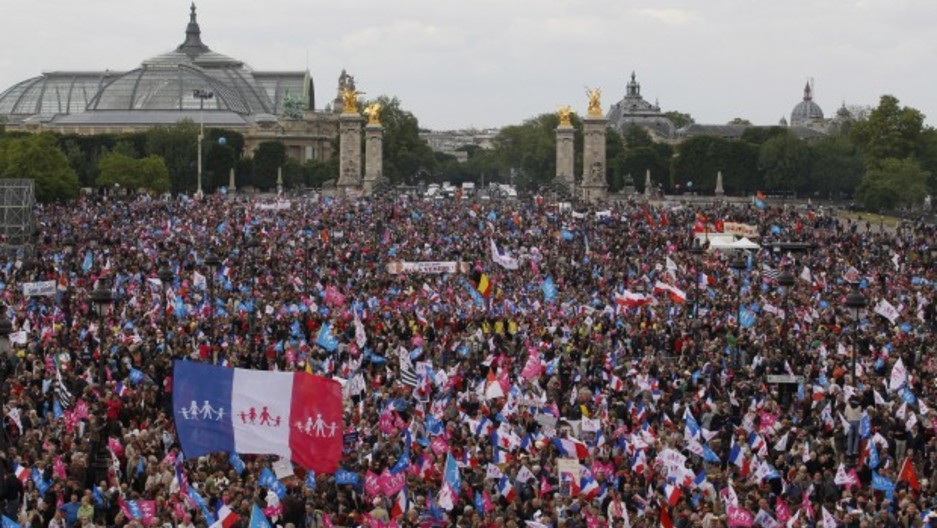 People wave trademark pink, blue and white flags at the Esplanade des Invalides as they attend a protest march called, "La Manif pour Tous" (Demonstration for All) against France's legalisation of same-sex marriage, in Paris, May 26, 2013. The French parliament on April 23 approved a law allowing same-sex couples to marry and to adopt children, a flagship reform pledge by the French president, which has often sparked violent street protests, and a rise in homophobic attacks. REUTERS/Stephane Mahe (FRANCE - Tags: POLITICS CIVIL UNREST) - RTX101QQ

Share
The Cannes Film Festival delivered its top prize to a lesbian romance said to contain sexually explicit scenes. "Blue is the Warmest Color" by French-Tunisian director Abdellatif Kechiche is sure to raise controversy. There is another kind of controversy gripping a large segment of the French population now: gay-marriage. This past Sunday, about 150,000 people marched on the streets of Paris to protest the new gay-marriage law. And it says something about the contrast in cultural attitudes in France. The New York Times' Steve Erlanger in Paris says "France is a Catholic country where nobody goes to church" and where the arts are fiercely protected.