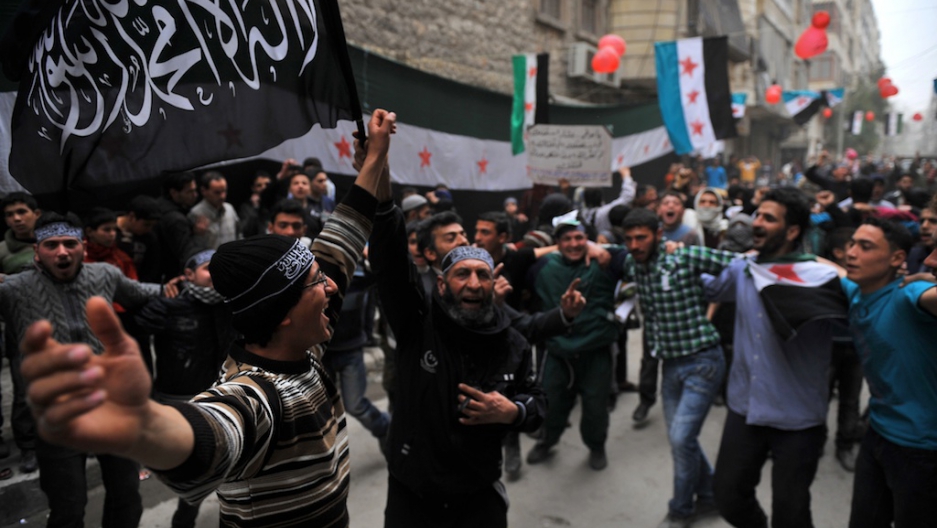 Syrian protesters sing and dance while waving an Islamist flag during an anti-regime demonstration in the northern city of Aleppo on March 22, 2013. EU foreign ministers mulled a contested push by Britain and France to lift or amend a Syria arms embargo to help tip the balance in the country's more than two-year conflict.
Credit: Bulent Kilic
Share

European Union foreign ministers met Monday to discuss dropping their arms embargo on Syria, amidst British and French calls for action in the region.

Lifting the embargo would allow EU nations to supply arms to the rebels, who have been fighting Assad's government in a bloody three-year civil war that has spilled over into neighboring countries and left at least 80,000 people dead.

The arms embargo expires on May 31, and if no agreement is reached, it could collapse altogether, Austria's foreign minister Michael Spindelegger — who opposes arms deliveries to the rebels — said Monday.

"If there is no compromise, then there is no sanctions regime," said Spindelegger. "In my view that would be fatal, also for those who now absolutely want to deliver weapons."

The Czech Republic, the Netherlands, Finland and Sweden join Austria in opposing supplying the rebels with arms.

Britain is the most outspoken supporter of ending the embargo, and UK Foreign Secretary William Hague said they supported the peace conference slated to take place in Geneva next month.

"In the end there is only a political and diplomatically supported solution," Hague said, but added that lifting the ban on supplying weapons was "part of supporting the diplomatic work" and that Assad's government needed "a clear signal that it has to negotiate seriously."

Dutch Foreign Minister Frans Timmermans and Germany's Guido Westerwelle were leading an effort for compromise, which would involve lifting the arms embargo but delaying the shipment of arms for a year, Reuters reported.

The rebels are currently receiving arms via Jordan and Turkey.

The renewed arms embargo debate comes amid more unconfirmed reports of chemical arms use in Syria, with French officials and the French newspaper Le Monde saying they have convincing proof.

"There is increasingly strong evidence of localized use of chemical weapons," French Foreign Minister Laurent Fabius told reporters. "That must all be verified, we are doing that with other partners."

"Soon they experience difficulty breathing, sometimes in the extreme; they begin to vomit or lose consciousness. The fighters worst affected need to be evacuated before they suffocate," Le Monde wrote, adding its reporters "witnessed this on several days" outside Damascus.

The US and Russia have slated a peace conference in Geneva next month, which both Assad's government and the rebels have agreed to attend in principle. The exact dates, plan, and attendees of the conference have yet to be solidified.