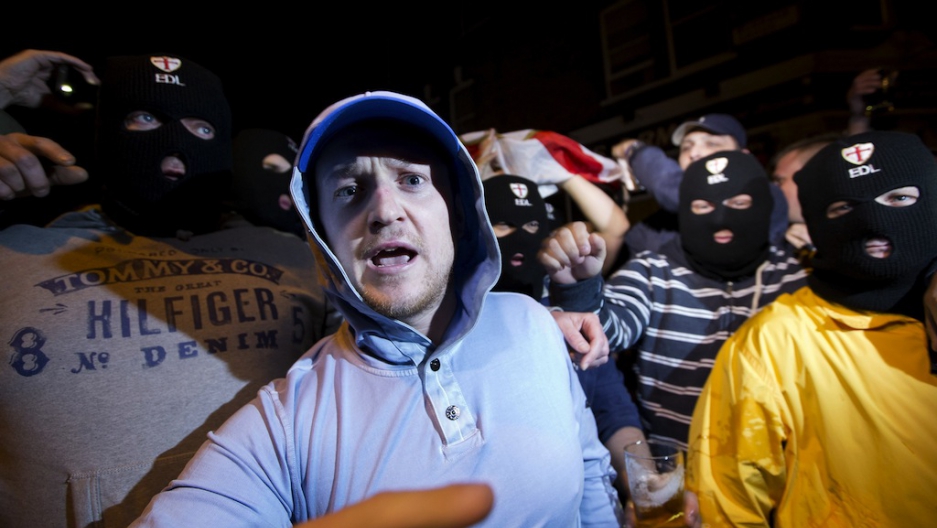 In the wake of Wednesday's brazen and brutal machete attack in Woolwich, England, members of a British anti-Muslim group called the English Defence League (EDL) have clashed with local authorities after taking to the streets in protest.

Close to 100 members of the right-wing group took to the streets the night of the attack wearing black balaclavas with the EDL logo prominently emblazoned, while others marched draped in St. George’s flags. EDL leader Stephen Lennon, who goes by the name Tommy Robinson, told reporters that night, "Enough is enough.... We have weak leaders. Our police, our leaders tip-toe around this issue."

The group hurled bottles and became involved in minor skirmishes with the police, but later dispersed, with no arrests made.

However, two men associated with the EDL were arrested near London later that night after two separate attacks on mosques. The first was arrested in Braintree, Essex for attempted arson, after reportedly entering a mosque armed with a knife. The second man was taken into custody for alleged “racially-aggravated criminal damage” of a mosque in Kent, according to the Evening Standard.

The EDL has said previously that it supports peaceful protest, but its critics say the group perpetuates jingoistic racism — a position supported by the fiery rhetoric and actions that have been put forth by members of the EDL as of late.

Shortly after the attack in Woolwich, the EDL's social media platforms lit up with hurried and impassioned calls to action:

****CONFIRMED WE HAVE BEEN SUBJECT TO A TERROR ATTACK BY ISLAM, WE ARE CURRENTLY UNDER ATTACK****

Similar posts appeared on the EDL's Facebook page, with each message receiving hundreds of likes and comments. Over the course of Wednesday afternoon and Thursday morning, the official EDL Facebook page went from roughly 26,000 likes to over 90,000 at time of publication.

Some followers of the page made inflammatory statements about Muslims and called for continued "fighting" against them. “Let’s get this civil war started!” one commenter wrote.

An article published on the EDL website, "Woolwich: We are at war," echoed that sentiment, proposing a less-than-peaceful response to the Woolwich attack:

"Some believe that campaigning against Islamic extremism will just make matters worse. They’re all wrong. The victims deserve the truth. We don’t like to admit it, we don’t want it to be true – and that’s absolutely fine...But it doesn't’t change the simple fact: we are at war.

"We need to clamp down on extremist preachers and the mosques that continue to host them. We need to kick the extremists off our streets and out of our country. Quite simply, we need to cut out the cancer that is Islamic extremism.

"This is a war in defence of our culture, our rights, our freedom and our country. It’s about time our government began to act like it."

The EDL has no official membership list and exists principally as an informal online presence that intermittently coalesces into street protests typically numbering between 1,000 and 3,000 people.

And while members of the EDL have garnered headlines for their ideology since Wednesday, it remains unclear as to how many people in the region are involved or can recite more than a prosaic sound bite about the right-wing group that self-defines as a human rights organization.

According to their mission statement, the EDL was founded in 2009 in the wake of "shocking actions" by a small group of Muslim extremists who "openly mocked the sacrifices of British service personnel without the fear of censure" at a parade held in Luton for soldiers of the 2nd Battalian Royal Anglican Regiment who were returning home from Iraq. Specifically, the group of Muslim anti-war protesters held up placards at the homecoming parade which read "Butchers of Basra" and "Anglian soldiers go to hell".

The EDL's statement continues on, saying that while the anti-war actions in question were "certainly those of a minority," the EDL believes "they reflect other forms of religiously-inspired intolerance and barbarity that are thriving amongst certain sections of the Muslim population in Britain."

It may appear on the surface that the EDL's goal is to heighten division between the UK's Muslim community and bleeding-heart English nationalists. On paper, however, the EDL manifesto is organized around five exceedingly broad, ideologically vague principles. They include, in the words of the group:

"Protecting and promoting human rights; promoting democracy and the rule of law by opposing Sharia law; ensuring that the public get a balanced picture of Islam through public education; promoting the traditions and culture of England while at the same time being open to embrace the best that other cultures can offer; and working in solidarity with others around the world who share our common values."