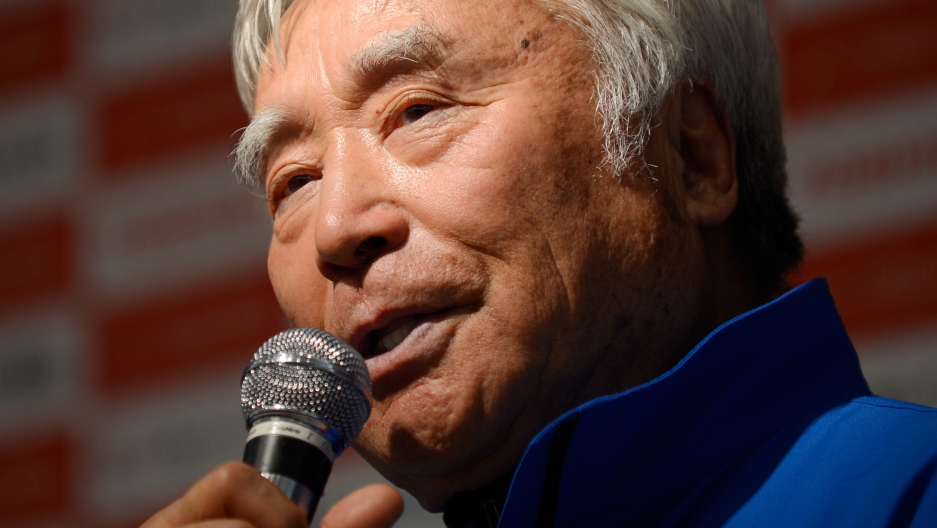 Mt Everest has been conquered by an 80-year-old after  Japanese mountain climber Yuichiro Miura, who has had four heart surgeries, reached the summit Thursday.

However, Miura's record might not last long, with an 81-year-old Nepalese man, Min Bahadur Sherchan, preparing for his own attempt on the summit next week.

He reached the top of the 29,028 foot mountain at about 9:00 a.m. local time accompanied by three other Japanese, including his 43-year-old son and six Nepali sherpas.

At home in Tokyo, Miura's wife and two daughters chronicled every step on Facebook and were first to hear of his successful climb.

He told them via satellite phone from the summit:

Previously the oldest climber to summit Everest was Sherchan, at age 76 in 2008.

Miura, whom the Associated Press describes as an extreme skier, first climbed Everest in 2003 and repeated the feat five years later.

He also skied down Everest from the so-called South Col in 1970, and has since skied down the highest mountains on each of the seven continents.

On his expedition website, Miura explained his attempt to scale Everest at such an advanced age:

"It is to challenge [my] own ultimate limit. It is to honor the great Mother Nature... And if the limit of age 80 is at the summit of Mt Everest, the highest place on earth, one can never be happier."

He told Reuters in April that the record "is not so important to me," adding:

"It is important to get to the top."