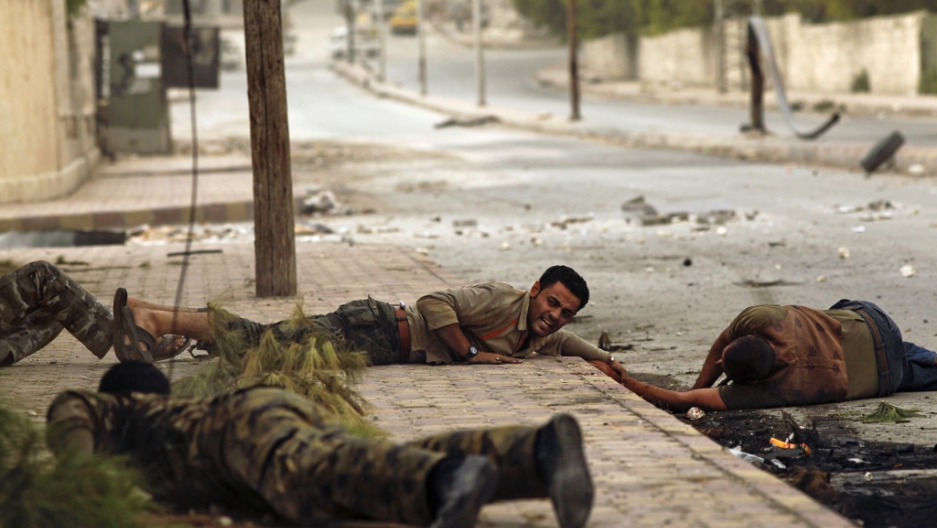 Members of the Al-Baraa bin Malek batallion, part of the Free Syria Army's Al-Fatah brigade, duck to the ground as they pull a man who was shot by a sniper twice in the Bustan al-Basha district of the northern city of Aleppo on Oct. 20, 2012. Ahmed Hieder hopes to build a robot that will do such rescue work in place of humans.
Credit: Javier Manzano
Share

KILIS, Turkey — With his shiny gray suit and long hair, Ahmed Hiedar, 28, bears little resemblance to a rebel soldier. But he has won more battles against the Syrian government than the average AK-47 welding opposition fighter.

His war is waged from the Turkish side of the Syrian border, in a cluttered hotel room, barely wide enough to fit a single bed.

His weapon is a modest laptop, and his goal is not to take lives but to save them.

“I stand with the rebels, but have not taken a side in the fighting. I don’t like killing. My weapons are viruses and a servo” — a motor used in robots, Hiedar said, as he tidied a bed littered with books and electronic components.

Hiedar’s cyber warfare began in the early days of the revolution.

Social media played a key role in inspiring anti-government protests. In response, the government sought recruits to help monitor such activity. Hiedar’s programming skills made him a prime candidate.

“They asked me to join the Electronic Army in exchange for military service,” Hiedar said. “I was taken to an underground basement behind an ordinary looking computer store. It’s like another [world] down there.”

What he saw in this subterranean digital bunker was American technology capable of monitoring 8,000 IP addresses per second.

“They observe everything! Whatever you type they can access it. This is why the internet became so slow in Syria, especially once the revolution began. Everything is being screened for keywords, and even phone calls,” he said.

According to Hiedar, the Electronic Army has clandestine bases in every major city. When they track a violation against the state, they locate the user and bring him in for questioning. In recent weeks, the group has grabbed global attention by hacking the BBC, Financial Times and Human Rights Watch, and waging digital war with Anonymous.

He told the Electronic Army that he would consider their offer. But instead he went into hiding, waging an electronic war against them with a group of seven hackers known as the Pirates of Aleppo, combined with a larger group, the Falcons of Damascus.

When an activist was arrested, the Pirates would get a call asking them to clean up Facebook pages and blogs.

“We would remove anything anti-government and replace it with pornography,” Hieder said. “Pornography would make them relax. It got the best reaction. The guys would be investigated for a few hours, maybe a little torture but nothing major. Then they’d be released.”

Together the Falcons and Pirates hacked government websites, personal pages of government officials and departments, and even hacked into live state television broadcasts — 13 times, Heidar says.

“Sometimes we would broadcast about activists and protesters being killed, or announce the cancelation of pro-government demonstrations. Once we broadcast the news of Bashar’s resignation ‘for the good of the people’ for two minutes before they recovered the broadcast servers,” he recalled.

Heidar, known online as the Harvester, was tried in absentee twice for his cyber actions. Both times he was sentenced to death for “insulting his majesty.”

His issues with the Syrian regime dates back to, of all things, an album by Chris de Burg fittingly titled “The Road to Freedom.”

It was 2004 and rock music was banned in Syria, but it could be bought in certain underground stores. Hiedar said the Syrian police caught him trying to purchase the album. They detained and tortured him for 5 days before he was released without charge.

“Later, I bought that album in Qatar,” said Hiedar who attained his master’s degree in artificial intelligence at a Qatar university. “That album was worth it,” he added with a laugh.

His second arrest was on his return from Qatar, when he and two partners applied for permission to build a robot. It was a young guy thing: “…a female robot, to show it in some exhibit, and people would get curious and come see it."

“We were joking along the way like, ‘what if they arrest us.’ It was just a joke. We never thought they actually would,” he said.

When they submitted their application, Hiedar said the group were arrested and accused of being spies for Israel.

“This time it was serious,” he said. “They left memories all over my body.”

He described extreme torture with electric shock, cigarette burns, beatings that broke countless bones, spikes forced under toe nails and a contraption he spoke of only as the ‘dentist chair.’

“They wanted the names of 10 spies,” Hiedar recalled. “I told them David Cohen but the reply to that was ‘Nice try Sunshine.’” (Cohen is a famous Israeli spy from the '80s.)

Forty days later, and 35 pounds lighter, Hiedar was finally released, but only after his father sold 3 houses to pay the release fee.

Today, Hiedar again has plans to build a robot, inspired by his two great passions, software development and “redheaded” women. His invention, which he calls Tena, was designed to rescue the injured from the line of fire. (Tena is named after a Swedish redhead he met on a plane once; Those few hours sitting next to her inspired a lifelong dream to build a robot bearing her name.)

Back in his hotel room, GlobalPost watched Hiedar analyze video of attempted frontline rescues. In one scene a man runs out to save an injured comrade only to be hit by the same sniper. Another scene shows men with ropes dragging an injured child. In a third video metal poles are used to painstakingly roll a woman with a head injury to safety.

“Look at his face,” Hiedar said as he watched the man on the screen pocking and pulling the metal bar in another failed attempt to roll the female victim to safety. “He is trying to give a soul to the metal — to make it do what he needs it to. This is what I do for a living. These videos inspired me.”

Hiedar’s latest robot design is a contraption built around an armor plated bulldozer, with titanium arms to lift the injured into a portable clinic inside. He plays with his prototype as a child would a toy-racing car, and explains that the whole thing will operate by remote control, within a 5-kilometer (3 mile) radius.

Working on this design is a team of 5. Hiedar handles the software. Two others are working on electronics and mechanics. An Italian activist has taken the role of project manager, and an American nurse is on the team to give medical advice.

But the project has left Hiedar at odds with both sides of the conflict. Already wanted by the government for his hacking, he is now sought by more extreme elements of the opposition seeking to force him into developing his life-saving Tena into a weapon.

Hiedar and his team face constant threats from opposition forces. In early April, he smuggled his family out of opposition-held Syria amid harassment and threats, but still he refuses to allow any kind of weapons to be attached to his robot.

“To me it would be like saving a soul to kill another,” Hiedar said.

Hiedar funded the prototype himself. Private donations are starting to come together for the real deal, which is expected to begin production in early, May.

As for Hiedar, he has no desire to return to Syria.

“Not at least for another 10 years. That’s how long it will take for Syria to get back to normal. After that I’ll let future Ahmed decide.”