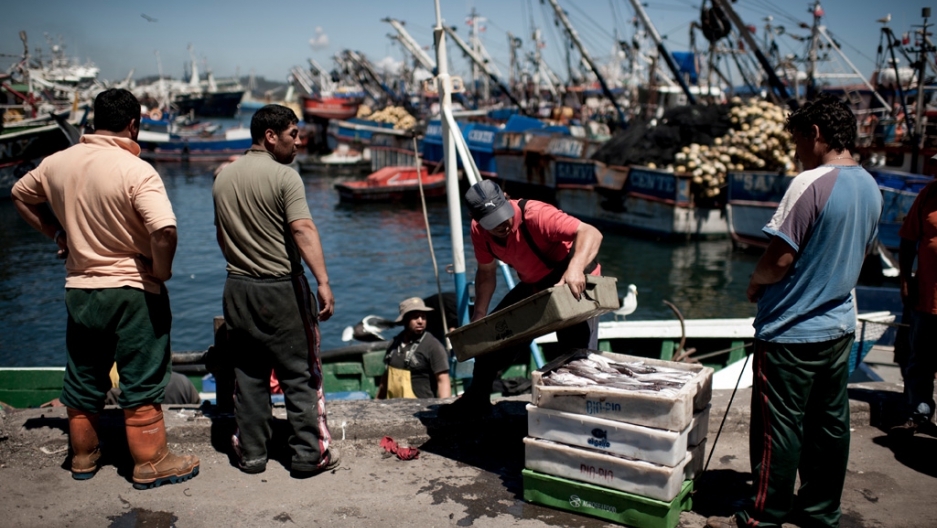 An hour into the journey, with the yellow lights of Talcahuano fading to a greasy slick on the horizon, the lights in the cabin began to flicker and the sonar tracking equipment failed. Even if tracking fish without sonar were possible, raising tons of writhing fish from the ocean without an battery-powered winch was not.

Attempts to resuscitate the two 12-volt batteries that fueled the electrical system were unsuccessful. After several hours, Gomez emerged from the bowels of the engine room, grease-stained and out of answers — the Riveira would have to return to port for new batteries.

“It’s a minor setback,” the 46-year-old Gomez shrugged. “We’ll see what we can do in Talcahuano and then head out again in a few hours.”

In Chile, a country blessed with nearly 4,000 miles of coastline, few trades stir comparably proud emotions or evoke such outsized mythologizing as the life of the artisan fisherman. The reality is far less romantic.

The Riveira is the largest class of boat still considered artisan by Chilean fishing law. At nearly 60 feet, it can accommodate a crew of 10, and remain at sea for week-long stretches in pursuit of its catch. The conditions are cramped and dank, the work is by turns arduous and tedious. These are certainties on which the artisan fishing class can depend, but these are uncertain times.

Union leaders representing tens of thousands of artisan fishermen spent the last two years ensnared in a contentious debate with industrial fishing companies over legislation to decide how fish quotas will be distributed for years to come. But aboard the Riveira, the crew was more concerned with the hundreds of tons fish still to be caught before the end of the season, and the money they’d have to survive on through the long offseason.

A crewmember on the Riveira can make upwards of $16,000 during the six-month fishing season. For unskilled labor, few jobs compare.

“Consider a construction worker earns about the same as we do, but he works all year,” Gomez said.

By dawn, the Riveira was cruising at 7.5 knots out of Talcahuano harbor to the mouth of the Itata River where a frenzied hunt was already under way. Boats with fearful names like Tsunami and hopeful ones like Messiah twisted menacingly in each other’s wake, cutting off escape routes and forcing the small pelagic fish into their nets.

When the Riveira was in position, a small boat called a panga attached to the stern released from its host, dragging one end of a net some 1,500 feet long. In the water, the panga resembled a bright orange bucket as it drew a wide arc, encircling the swarming fish below.

Gomez barked orders down to the crew, now dressed head to toe in yellow rubbers, and frenetically aiding a ten-foot pile of black netting into the water. Once the pangero, as the panga driver is known, had brought the net full circle, the loose end was hooked to a winch to begin the slow process of raising the fish. On this day, however, the first cast slipped free of the winch, allowing the anchovy and sardine to escape. The second cast fared only slightly better, snaring a single unlucky fish.

By late afternoon, as the setbacks continued to mount, tempers flared. “He doesn’t want to work,” shouted a veteran crewmember at a novice winchman.

As a 20-year veteran of living and working at sea, Gomez called the men into his office, quickly diffusing the conflict. During a lull in the action, a few men squeezed in around the kitchen table, quietly sipping Ceylon tea and nibbling avocado sandwiches.
“It’s not always like this,” mused the cook, Carlos Muñoz, as he dutifully poured the tea and served the sandwiches.

Before he answered an advertisement to join the crew of the Riveira, Munoz worked as a cook in a Chinese restaurant, and prior to that as an MC at a strip club. He eventually tired of the late nights and chop suey. His dubious qualifications as a fisherman were a source of good-natured ribbing, but then trawlers have their stories.

“Some trips we fill the hold in two casts and we we’re done,” Muñoz said hopefully, pouring scalding water into empty mugs.

Late in the season fish are scattered and catching them in large hauls becomes increasingly difficult. By sundown, the Riveira had nothing to show for its troubles. Over the next several hours, the crew rested in bunks, stacked three high, with one keeping vigil above, a procedure given special attention in this earthquake and tsunami prone nation.

Early the following morning, Gomez was back at the wheel, steering the L/M Riveira toward the horizon. The captain, typically cool under pressure, was uncharacteristically fidgety. Beside him pages of the Holy Bible fluttered wildly in the breeze.

Suddenly he signaled the panga to release, and the crew sprang into action. This time all the pieces fell into place. The net closed around its prey. In the frigid water below, sea lions dove into the net for an easy meal. Above, seagulls scooped vulnerable fish off the deck.

The black mesh netting swelled with thousands of tiny anchovy and sardine. One of the crewmen plunged a flaccid, rubbery tube into the silvery mass, sucking the fish across the boat and flushing them into the rusty hold.

Important forage fish for larger animals, sardine and anchovy are also the prize catch of larger artisan boats, sometimes called semi-industrial. Their oily, protein-rich flesh is ideal for making the fishmeal used by salmon farming operations in Patagonia. Fresh anchovy also makes for a ceviche that is not to be missed.

The process, Muñoz explained, involves popping off the tiny heads between thumb and index finger, stripping the fleshy back and tossing it in a bowl of lemon juice, which cooks the raw meat. He tossed in a few handfuls of white onion, cilantro and served the ravenous crew, including Orlando Reinoso who — convinced that ceviche enhanced virility — greedily shoveled spoonfuls into his mouth.

“A plate will keep you going, and women will love you,” Reinoso exclaimed, flexing his bicep to illustrate his point. Aside from filling bellies and temporarily lightening the mood, the eight-ton haul was barely enough to fill a tenth of the hold.

Before nightfall, the crew cast twice more, but caught nothing.

Gomez, the Riveira’s captain, reflected on the life he might have enjoyed if his fortunes were not married to the fishing industry. It is the sort of life he hopes for his sons, one of whom is studying occupational therapy at college.

“The life of the artisan fisherman takes a toll that I’ve never wanted for my sons,” Gomez said.

Amid the many hardships and a swirl of uncertainty, including the long-term health of fish stock in the South Pacific, a life on the open waters of the Pacific still beckons.

At the age of 20, Fermin Ayala is the Riveira’s youngest and newest crewmember. He hails from a long line of fisherman, and has considered doing little else. When one of the winchmen left open his seat aboard the L/M Riveira during the offseason, Ayala jumped at the chance to fill the vacant position.

After two days of restless sleep and fewer than 10 tons of fish, Ayala sat silently in the captain’s cabin, watching the sun fade to the west. In the presence of Gomez, Ayala was shy, but allowed himself to briefly consider the possibility that one day he might sit in the captain’s chair, commanding his own boat.

“That would be,” he said, holding his breath before exhaling a final thought, “excellent.”

This is Part III of the series. Read Part I and Part II.