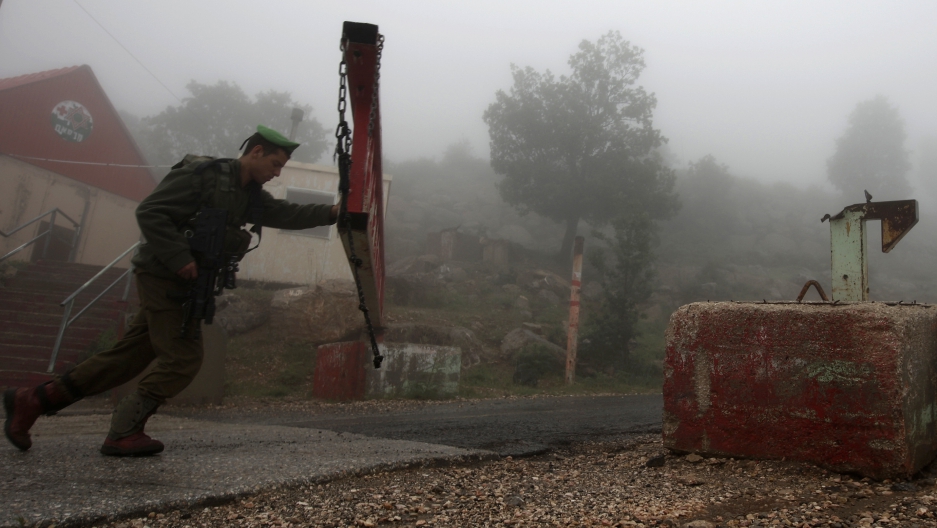 An Israeli soldier partially closes a barrier across a road, on Mount Hermon in the northern Israel occupied Golan Heights on May 15, 2013, after two projectiles fired from Syria hit Mount Hermon.
Credit: JALAA MAREY
Share

JERUSALEM — A new front seems to be developing in the ever-changing Syrian civil war — a front of cross-border bluster.

On Monday, Al Mayadeen, a Lebanese television station that is affiliated with Hezbollah, broadcast images of Syrian soldiers standing next to a damaged Jeep, pierced with bullets (video below). The soldiers claimed the Israeli vehicle was found in rebel territory at Qusayr.

The Syrian side claimed the Israeli vehicle had crossed the cease-fire line on Tuesday, the Associated Press reported.

Israel Defense Forces spokesman Capt. Eytan Buchman, however, commented that the Jeep "hasn't been in use by the IDF for ten years, and was last used, in fact, by the South Lebanese Army in the early 2000s."

"Our armed forces have destroyed an Israeli vehicle with everything that it had in it... The vehicle had crossed the cease-fire line and was moving towards the village of Bir Ajam, situated in the liberated Syrian zone."

The IDF's Buchman responded that the Syrian statement that it had attacked an Israeli Jeep within Syria was simply "bravado."

Rather, the IDF says that at about 1 a.m. local time, a Syrian position opened fire on an Israeli vehicle in the central Golan Heights, in an uninhabited area near the Syrian border. In contrast to the Syrian report, Buchman said the Jeep was only lightly damaged, and that no one was injured.

Monday night was the third in a row that shells or gunfire originating in Syria have disturbed the sleep of the Golan's 40,000 residents. Israeli forces acknowledged that they exchanged gunfire over the Israeli-Syrian border in the disputed area Tuesday, with soldiers saying they returned fire after shots were directed at an Israeli military patrol on the border in the central Golan Heights.

"We returned fire and identified a hit," Buchman said.

With a second event targeting Israel within 24 hours, it appears that Assad's forces have seized upon accusations that Israel is fighting with the rebels as a tactic in the public relations battle over a long and cruel war with anti-regime forces.

In a further indication of the seriousness with which Israel is taking the devolving Syrian civil war, IDF chief of staff Gen. Benny Gantz toured the Golan Heights on Tuesday afternoon.

Gantz told lawmakers that "tensions in the north could quickly devolve into war."

“A day doesn’t go by in which we don’t have to make decisions that could lead us to a sudden and uncontrollable deterioration,” he said. “That is something that will be with us for the near future. We need to be more alert.”

Regarding the incident of Israeli and Syrian forces exchanging fire, Gantz said on Tuesday, "We will not allow the area of the Golan Heights to turn into an easy target for Syrian attacks."

Gantz warned that Assad would "suffer the consequences" of continued attacks. "I am not a belligerent man, but we have to be prepared to defend ourselves. All in all, the situation in the Golan Heights is increasingly unstable," he added.

For now, Syrian statements claiming hits against Israeli elements consist mostly of boasting for the purposes of projecting a tenacious image, but it could, of course, snowball into something much worse.

The concern is that if any Israeli soldier or civilian is hurt, even by an errant shell, Israel may feel obliged to respond massively and could be dragged into the fighting. It seems Assad may be angling for that — at least for today.

Israel is still technically at war with Syria, having seized 460 square miles of the strategic Golan Heights during the 1967 Six-Day War.

Israel later annexed the land, a move that has never been recognized by the international community.

However, the recent increase in the number of stray shells and bullets landing on the Israeli-controlled side of the Golan Heights has been blamed on the fighting between rebels and the forces of Syrian President Bashar al-Assad.

The Israeli Defense Force has lodged a complaint with the United Nations over the firing.

The UN Disengagement Force responsible for patrolling that area said in a statement:

"The IDF views the recent incidents in the north with concern and has lodged a complaint with UNDOF."