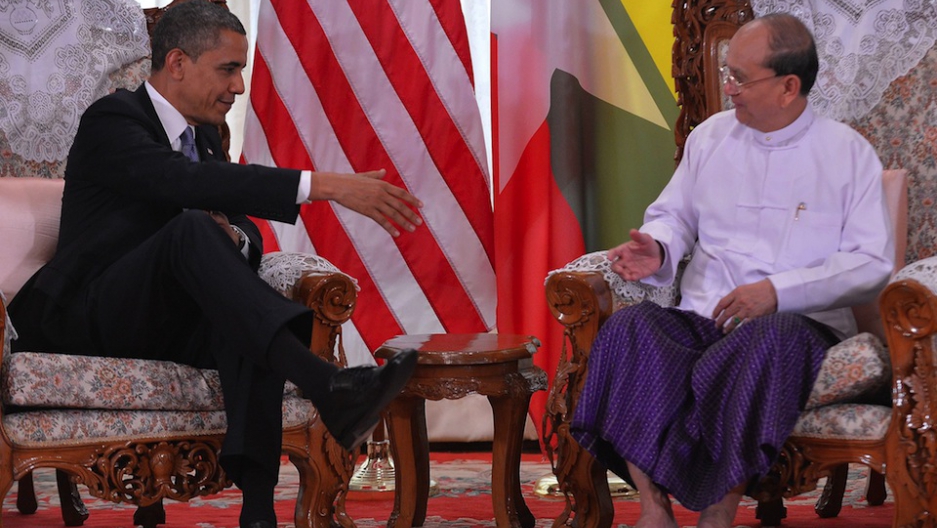 Thein Sein is the face of Myanmar's movement to transform the nation (formerly titled Burma) from an isolated place run by despots to one of Asia's most spectacular turnaround stories. During his two years in office, the nation has seen political prisoners freed, liberties restored and the state's tight grip on commerce relaxed.

But it has also been wracked by bloody civil war near its Chinese border and religious riots that have killed left hundreds of people, most of them Muslim. Violence between ethnic Buddhists in the western state of Rakhine and Rohingya Muslims, who are not recognized by Myanmar as citizens, claimed 192 lives last year.

While acknowledging the tensions between Myanmar and the US, Obama said on Monday that Thein Sein had displayed leadership in implementing political and economic reforms in Myanmar.

"I also shared with President Sein our deep concern about communal violence that has been directed at Muslim communities inside Myanmar. The displacement of people, the violence directed towards them needs to stop," Obama added.

Thein Sein sat at Obama's side as he spoke.

Ernie Bower, a Myanmar expert who met with Thein Sein on Sunday, told Time the Myanmar leader planned to update Obama on the progress made on political and economic reforms since their meeting in November. Thein Sein also planned to ask for US support in reforming Myanmar's laws, and in increasing trade and military training.

Obama's invitation to Thein Sein, the first leader of his country to visit the White House in half a century, leaves the US president vulnerable to criticism.

America's small but vocal lobby against Myanmar's government insists this degree of warmth is premature; the US Campaign for Burma has accused Obama of "honoring an abusive leader."

Thein Sein came to power under a military government accused of a litany of human rights abuses: forced labor, torching villages and child soldiering among them. The ethnic and sectarian violence in Myanmar has worsened since Washington started loosening sanctions against the country.

But 68-year-old Thein Sein, whose demeanor is more like a grandfather than strongman, has also received high praise for working to improve a broken system from within.

In April, the International Crisis Group offered him its prestigious "In Pursuit of Peace" award. Thein Sein's response was humble: "I do not believe I received this award as a person but as a representative of a movement to transform a society."

"A dictatorship of five decades has loosened its grip. Under President Thein Sein, the desire for change has been met by an agenda for reform. A civilian now leads the government, and a parliament is asserting itself," he said.

The White House said the meeting "underscores President Obama's commitment to supporting and assisting those governments that make the important decision to embrace reform."

The exact topics up for discussion during the two leaders' sit-down is yet unknown, but Thein Sein told Voice of America, that he would call for a complete end to economic sanctions.

"Relations have greatly improved thanks to the policies of President Obama," he told a forum on Sunday. "For our political reforms, we also need more economic development."

More from GlobalPost: China's soft power in a new Myanmar

Human rights groups are questioning how far Washington's policy shift should go and why the White House is moving so quickly in its relationship with Myanmar.

The Washington-based US Campaign for Burma told Reuters that 1,100 ethnic Rohingya and 200-250 Kachin have become political detainees in the past year.

"When they abuse ethnic minorities, it really undercuts their credibility and undermines our ability to work with them," said Republican Rep. Trent Franks, one of a group of US lawmakers arguing for lifting the sanctions against Myanmar more slowly.