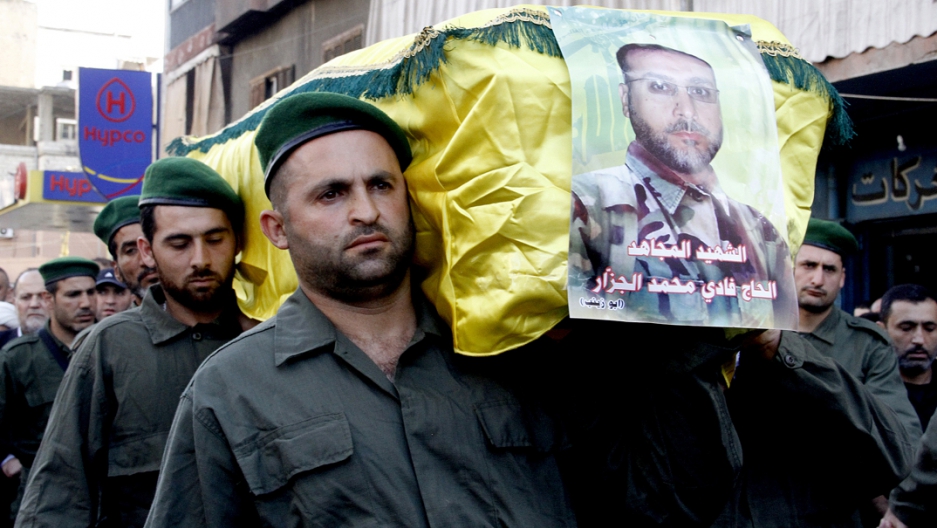 Members of Lebanon's Hezbollah carry the coffin of their comrade Fadi Mohammed al-Jazzar during his funeral in southern Beirut on May 20, 2013. At least 23 members of Lebanese militant group Hezbollah have been killed fighting alongside regime troops in the Syrian town of Qusayr, the Syrian Observatory for Human Rights said.
Credit: STR
Share

AL-QASR, Lebanon — The only official Lebanese presence at this northern border crossing with Syria is a tiny, one-man cinderblock army post. Rockets and shells explode nearby.

Just a few miles up the road is the Syrian city of Qusayr, once a rebel stronghold. There, an already fierce battle between Syrian rebels, government troops and Hezbollah fighters — backed by Lebanese-based, pro-regime militias they call “popular committees” — intensified Sunday as Syrian troops launched an aggressive operation to retake the town.

For generations, the Syrian-Lebanese frontier along this northern tip of the Bekaa Valley has existed only on maps. But now this once sleepy borderland is the frontline for an escalating Sunni-Shia sectarian conflict that could threaten the region.

Hezbollah, a powerful Shia militant group and Lebanese political party, is strengthening its military support for the Syrian regime of President Bashar al-Assad. Under the dictator, Syria serves as the primary route for Iranian arms to Hezbollah in Lebanon.

As part of this push, it is also throwing its weight behind Lebanon-based “popular committees” that are now both assisting in decisive Syrian battles on the regime side, and hardening sectarian tensions inside Lebanon.

Fear is growing that fighting between Lebanese factions — which are deeply divided by the Syrian war, and battling on both sides of the conflict — will continue when the combatants come home.

"The coordination between the popular committees and the Syrian army is winning the fight for Qusayr," said Abu Hamza, a 32-year-old Lebanese popular committee member. "And more people are starting to join us."

Abu Hamza spoke to GlobalPost in an olive orchard straddling the border, along with another fighter and an official from Hezbollah.

His face wrapped in a keffiyeh, and wearing new military fatigues, he says the fighting in and around Qusayr is going "good" but adds, "they [the rebels] are resisting us as much as they can."

Hezbollah insists the committees are made up of local residents disgruntled by Syrian militants fighting the regime. Officials and militiamen refused to discuss how many people have joined the various popular committees, which now operate in several Syrian provinces.

But party officials are quick to trump the militias’ success helping them battle rebels inside Syria.

"The popular committees are reshaping the balance of power with the [Syrian] militants," said Hajj Ghassan, a Hezbollah official from the Lebanese town of Hermel, southwest of the border.

Indeed, Syrian anti-government activists told Reuters Monday that roughly 30 Hezbollah fighters were killed in the fighting in Qusayr over the weekend, along with 20 regime soldiers and fighters from the popular committees.

In a televised speech earlier this month, Hezbollah chief Hassan Nasrallah confirmed the group is taking part in the Qusayr offensive. He said it was “normal” for Hezbollah to "offer every possible and necessary aid to help the Syrian army, popular committees and the Lebanese."

A Sunni Lebanese smuggler who helps facilitate weapons and supplies transfers to the largely Sunni Syrian rebels confirmed that Hezbollah’s involvement in the battle for Qusayr has both escalated the fighting and crippled their operations.

"Hezbollah has cut off almost all of our supply routes to the city," he said by phone from his location in Hermel. "Every day the fighting gets much, much worse."

But for the popular committees and north Lebanon residents sympathetic to Hezbollah, the fight is part of a larger battle to defend their homes and the area from “intruders,” or the foreign jihadists they say make up the ranks of the Syrian rebels.

Residents here generally parrot the same narrative: Lebanese popular committees are merely defending their homes, and that all weapons are purchased independently.

A middle-aged Lebanese farmer whose fields stretch into Syria says his workers are afraid to harvest crops on land where shells and rockets from Syria fall daily. The center of Qusayr is less than five miles from his doorstep.

"We are all part of the Lebanese popular committees," the farmer, who asked to remain anonymous, said.

He says the pistol in his waistband is never far from reach.

But “we are fighting for ourselves, not the Syrian regime,” he said. Several rockets exploded in the distance as he spoke. Nearby Lebanese army posts sat empty.

Locals say that before the war, relations between villages of different sects — including Sunni and Shia Muslims, as well as Christians — were good.

Cross-border and inter-sect marriages were common and trade flourished, with Qusayr serving as an economic hub for the entire area.

But the war, now in its third year, is tearing apart decades-long relationships between the villages.

With the Lebanese state largely absent, Hezbollah’s Ghassan says the movement has repaved roads, and repaired other dilapidated infrastructure. Signs and flags praising Hezbollah's primary patron, Iran, and its leaders are visible in nearly every village.

"There were never any problems between us in the past," Abu Hamza says of his Sunni neighbors, but whom he now calls enemies.

"But [Syrian rebels] killed my brother and father,” he said. “How can we ever go back to the way it was before?"